Disputes and controversies in science are always a good thing. They're fun to read about (and to write about), and they're bellwethers of the health of the enterprise. Moreover, they tend to stimulate thought and experimentation. Whether scientists are bickering about evo-devo, or about stem cells in cancer, or about prebiotic chemistry, and whether or not the climate is genial or hostile, the result is valuable.

Now of course, some controversies are invented by demagogues for political purposes. The dispute in such cases is far less interesting and clearly less profitable, even if participation by scientists is necessary.

This week, two papers in Nature weighed in on a major scientific controversy that has its roots in pre-Darwin embryology, fueled by some gigantic scientific personalities and even tinged with what some would call fraud. This intense scientific dispute spawned a sort of doppelganger, a manufactured controversy that is just one more invention of anti-evolution propagandists. The Nature cover story gives us a great opportunity to look into the controversies, real and imagined, and to learn a lot about evolution and development and the things we're still trying to understand about both.

The scientific dispute is an old one, dating to when scientists first began to study embryonic development in earnest. Embryologists like the great Karl Ernst von Baer noticed that the embryos of very different animals often looked so similar that they could hardly be distinguished from each other. A chicken embryo, at some point, looks an awful lot like a human embryo. What does this mean? Two schools of thought (roughly speaking) entered into competition, with evolution as the major subtext. One set of ideas envisioned development as recapitulation: development was a sort of re-play of evolution, with the organism recapitulating its evolutionary history as it took shape. Recapitulation theory was the brainchild of Ernst Haeckel, whose view of development was codified as his Biogenetic Law and sloganeered as "Ontogeny recapitulates phylogeny." Against recapitulation were the views of von Baer and others; von Baer formulated his own set of laws, the third of which repudiates recapitulation rather directly. Everyone agreed that embryos of different animals often looked quite alike; the dispute was about what this meant. And it seems that those who opposed evolutionary explanations (like von Baer) were eager to point to difference and divergence during development, while those who championed evolutionary views wanted to emphasize the shocking similarities between, say, chickens and mammals when compared at key embryological junctures.

Haeckel, famously, went on to point to those similarities as evidence for common ancestry and, infamously, to create a certain illustration of that evidence. His picture, thought by even some embryologists to be partly fraudulent (more accurately, "doctored"), is now a staple of anti-evolution propaganda. You can read all about that elsewhere; suffice it to say that Haeckel's drawings have long since been "corrected" without creating any problems for evolutionary theory. (For a much more detailed treatment of this saga, see Richardson and Keuck, Biological Reviews, 2002.) 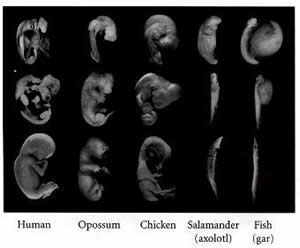 But interestingly, the debates about recapitulation morphed (wink) over the years into a distinct but related disagreement about whether animal development passes through a stage that is common to - or typical of - the lineage of the organism. Because although Haeckel's recapitulation idea didn't survive, it remained clear that development seemed to reflect evolutionary commonalities. Consider the photos on the right. (The figure was created by Michael K. Richardson, who led the research group that critiqued Haeckel's drawings in 1998.) While the various embryos shown all end up looking quite different - looking like the adult form, in other words - they seem to "start" at a place that's notably similar. (Compare the embryos in the first row.) That starting point is not the beginning of development, and in fact those different kinds of embryos got to that starting point via rather different beginnings. In other words, it seems that animal embryos pass through roughly three phases of development: an early phase that can vary from group to group (say, between birds and mammals), a late phase in which group-specific forms are established, and a middle phase that is eerily similar among groups. That middle phase has come to be known as the "phylotypic stage" of development, meaning that it is a stage at which the embryo looks like a typical example of its evolutionary group. For insects, this is thought to be the "extended germband" stage; for vertebrates, it's roughly the tailbud stage. The point is that there is a middle phase of development during which animal embryos of varying morphological destinies look very similar, even if their earlier stages seemed very distinct. This model of developmental trajectories, compared across groups, is known as the "hourglass model," nicely depicted by Richardson and colleagues in the cartoon on the left.

Why all the controversy? Well, the disputes all seem to be related to the fact that the model is mostly descriptive. And so, one criticism is that the model is based on what embryos look like, and not strongly anchored in carefully-defined and -measured characters. Moreover, some critics have noted that the comparisons were often restricted to popular laboratory species, such that when the analysis was expanded to include a broader set of species, the similarities in the waist of the hourglass become less striking. In other words, the dispute centered on the basis of the model. Critics were disputing the very existence of the phylotypic stage.

Oh, and while this interesting scientific debate was ongoing, some propagandists were shadowboxing with Haeckel's ghost, shrieking about fraud while creating in the minds of their dupes the illusion of a different debate: one about whether development and evolution are conceptually linked. Along the way, these busy demagogues suggested that the phylotypic stage is an illusion, cherry-picking their data more shamelessly than Haeckel ever did. In any case, these folks were exploiting the real scientific dispute: whether the phylotypic stage can be defined more rigorously, in a way that links the similarities (whatever they are) to common ancestry. 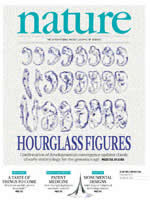 And that brings us to the cover story in this week's issue of Nature. The cover image depicts a version of Haeckel's infamous illustration. The issue includes two reports, very different in their approach and in the animals they examined. Both reports provide striking support for the hourglass model, by showing that the phylotypic stage is indeed characterized by distinctive and fascinating patterns of gene expression. Part II will explore those two papers.