It is, wrote the Roman poet Horace, fit and proper to die for one’s homeland. The word he used for homeland was “patria” (dulce et decorum est pro patria mori), and the word has entered into biology as the suffix for exactly that. Unlike Horace’s slogan, though, it applies more to living than dying. It would be nice if we humans could attempt to live for our homelands rather than die for them, but that’s another rant for another time.

There are a cluster of terms used by biologists to describe where organisms live or grow, and they are: sympatric, allopatric, parapatric, peripatric, stasipatric, and dichopatric. This flock of technical terms is confusing to the newcomer (and to some biologists), but there is a kind of logic - as much as in the evolution of any technical jargon - that will make it clearer, and at the same time allow us to set up the alternative views on the fundamental evolutionary process of common descent: speciation.

What is speciation? Well, it is the formation of new species. Most of the time in most groups of organisms, species are formed when one splits into two, or rarely more than two. Sometimes they form by hybridizing, or crossbreeding, to form a new species more or less in one go. Speciation is also referred to as macroevolution, an increase in biodiversity, or as taxonomic multiplication. We’ll leave these terms for later as well. Let’s return to the homeland.

[A classical scholar might wince, when reading this, because it is considered a sin to mix languages, and sym- and allo- are Greek, while patria is Latin. But it’s okay, really, because “homeland” in Greek is patros. Turns out the Romans borrowed a lot of words from the Greeks, or they both inherited similar words from a common source. In fact, common descent was first thought of for these languages, before Darwin. But that, also, is for another time and rant.]

So, if new species split from a common ancestor, they might do it in these two ways. One is how Darwin thought of it, and is referred to today as sympatric speciation. 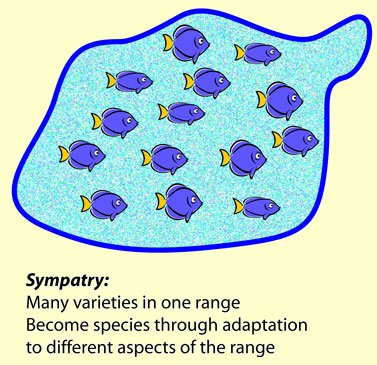 He believed that varieties within a species became adapted to local conditions in different ways. A frog might adapt to eating one sort of fly, and another member of its species, called a conspecific, might adapt to eating a different one. If the food were found in slightly different conditions, or at different times (one might fly during the heat of the day, while another might only fly at dusk), then the varietals must adapt to those times and conditions. Eventually their adaptations would incidentally cause so much difference in behavior or structure or climatic preference that they would no longer mate.

It is important to note that sympatric speciation, in Darwin’s mind and in the minds of those who today agree with him, that natural selection causes the adaptations, but not the speciation itself. Most biological notions of species (there are other kinds) involve sexual isolation or the inability to, or reluctance to naturally, breed together. Like many biological concepts, this is not absolute. A good many species, especially in plants, but not just them, will interbreed with their near relatives. The progeny are usually “mules”, infertile themselves, but a lot aren’t. Darwin thought that the reluctance to interbreed would follow as a byproduct of adaptation to these other things.

The other way, proposed by a German writer named Moritz Wagner in Darwin’s time, and with whom Darwin corresponded, involved populations of a species becoming isolated from each other. A river might form, or a mountain range rise, or a forest be divided by a desert, or, as we now know, a continent might split and move away. These things can happen rapidly, geologically speaking (to a geologist, a process that takes 20,000 years is considered “sudden”) or slowly. Each population will have slightly different conditions, and it will adapt to them in its own way, and time, and chance, will happen to them both. Each will go it’s own evolutionary way, so to speak. Since they are allopatric, this is obviously enough called allopatric speciation. 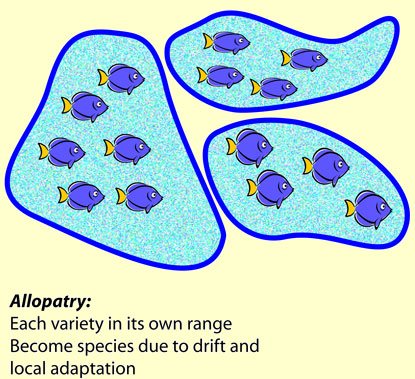 For all the esteem that Darwin is held in by biologists, his view did not win the day. He thought species were simply well-marked and more permanent varieties. In the early twentieth century, it was the consensus that species were more than that, and when the so-called Modern Synthesis of evolution and genetics was made in the 1940s, the views of Ernst Mayr and Theodosius Dobzhansky that speciation was allopatric became the new orthodoxy.

Added to this, Dobzhansky was a firm proponent of the notion, developed by Sewall Wright in 1931 but with precursors back to Darwin, of genetic drift. Populations can be seen to be “samples” of the entire gene pool of a species. Each population will differ slightly from its neighbors in the genes it has, and so if the flow of genes between them is stopped by isolation, genes that are rare in one may become, through simple random sampling, common in another. Species can thus be formed through random sampling “error”, if the combined differences of otherwise fitness-neutral genes add up to sexual isolation when they get back together; that is, when they become sympatric again.

Recent work has brought Darwin’s idea back into limited favor. It is now agreed that there is no single kind of speciation, and experiments and some historical cases have shown that sympatric speciation can occur. A fruit fly in California, Rhagoletis pomonella, that lived on the Hawthorn (or dogwood) tree shifted to introduced apple trees during the late nineteenth century. Since the introduction date is known, it is known how long this took - and it appears that it took less than fifty years. The two varieties are now isolated, and do not mate, for a simple reason: the hawthorn and the apple fruit at different times of the year. Hybrids are neither Arthur nor Martha, and are thus less fit than either variety, forcing them to adapt not only to their host trees, but to the preferred time of year each has for mating. Thus, they are forced apart.

It’s arguable that they are best understood as being allopatric - as the host trees are, in effect, different territories, which is how the allopatrists (every term must have an -ism) explained it at first, but if that tack is taken, there is effectively no difference between sympatry and allopatry. In any event, as explained so admirably by the Dutch biologist Menno Schilthuizen in his book Frogs, flies and dandelions (Oxford University Press, 2001), sympatry is back on the menu of speciation modes.

So what about the rest of the word salad? What does all that mean? What, for example, is peripatric speciation? Well, it was not long before it was realized that regions can also adjoin each other. If a population is an outlying one, speciation can occur when there is almost no gene flow. Hence Greek peri- (round or near to) and patros, peripheral populations. Ernst Mayr argued that peripheral populations have greater divergence and difference than central populations of a species range, based on his work on birds. So a population at the extreme edge of the range will be more likely to evolve independently than one in the centre of the range. 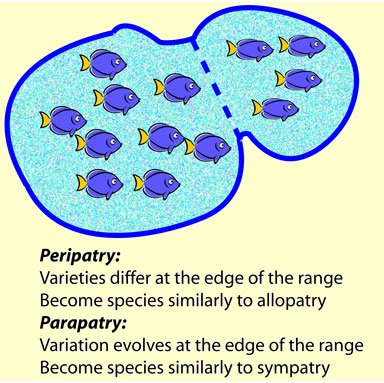 Stasipatric speciation is an intriguing one. 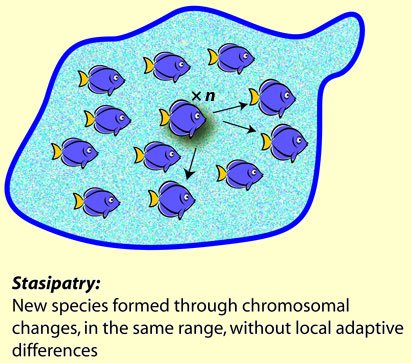 An Australian entomologist, Michael White, specialising in grasshoppers, noted that there were races of grasshopper (a race, to a biologist, is just a group found within a species) that had the same range, but had markedly different chromosome counts. Moreover, they didn’t differ in their adaptations or food requirements. They just had double or triple or even more the number of chromosomes of their fellows, and more to the point, they could not interbreed with each other. In one place (Greek: stasis), they formed new species. The multiplication of chromosomes is called polyploidy - another term to be discussed someday. It happens that a good many organisms form new species by the multiplication of entire sets of chromosomes, especially ferns, corals, flowering plants, and many do this in the act of hybridizing between related species. Stasipatric speciation is a major method of causing new species for a lot of organisms. 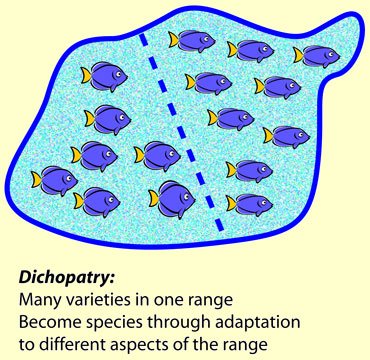 What on earth is this? The Greek dictionary tells us that the term dicho- means to split asunder, or to have two adjacent things, as in dichotomy. It seems to me that this covers all the others, but it actually has a technical meaning: speciation where a species more or less evenly divides across its range. The east side might evolve to become one species, and the west side the other. The mechanisms are unclear to me, but I suppose it rounds out the set of alternatives.

All of this goes to show the complexity of speciation, and most importantly, that species do not gradually change as a whole from one species to another, and that within the research program and theoretical tradition since Darwin, they never have. Being a species is more about maintaining genetic homeostasis (since we’re doing the Greek etymology here, work it out: homos means “same” and we already encountered stasis - so, staying in the same place, or state). In short, when a species has its own range, it’s all about homeland security, which is to live for, not to die for.

Mayr’s latest views are to be found in:

However, he shifted his ground a bit over the years (a virtue in a scientist).

Dobzhansky’s initial ideas were published in

and a later account of his ideas, which were influential on many, is

White’s views are to be found in

The following items are reviews or major contributions. The simplest summary of current thinking is

A more technical review is

The issues and arguments over speciation theory can be found in:

and a historical review is

The following are significant articles:

Endler, John A. 1989. Conceptual and other problems in speciation. In Speciation and its consequences, edited by J. A. Endler and D. Otte. Sunderland, Mass.: Sinauer Associates.