„…Variations neither useful not injurious would not be affected by natural selection, and would be left either a fluctuating element, as perhaps we see in certain polymorphic species, or would ultimately become fixed, owing to the nature of the organism and the nature of the conditions….”

See THE MODERN MOLECULAR CLOCK for a good overview of neutrality, and the molecular clock.

The importance of neutrality

Concepts such as innovation, modularity, evolvability, robustness seem to be all intricately linked to neutrality. Since there are 3 codons of 4 possible bases which encode for amino-acids, there are \(4^3=64\) possible codes but there are only 20 amino-acids. This means that many changes in codons will neutral effects on the phenotype.

The effect of neutrality on evolution can be quite important. Without neutrality, evolution is often constrained to local fitness maxima, unable to progress to higher fitness values. Neutrality allows the genotype to ‘drift’ during these periods. This also explains why evolution often appears to go in spurts after periods of apparant stasis. And while the phenotype may be in stasis, because of the neutral evolution, the genotype isn’t. 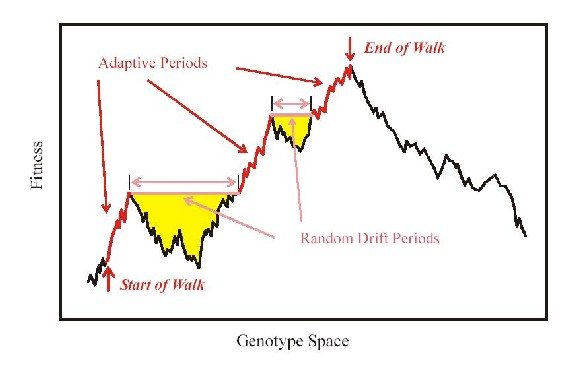 In other words, not only is neutral evolution NOT non-Darwinian or anti-Darwinian but it seems to be essential for evolvability.

In future contributions I hope to explore more of the ‘scale free’ nature of DNA, protein, RNA networks, the importance of neutrality on evolvability, robustness and modularity as well as information theoretical approaches to show how simple processes could have created the world as we know it.

M. Toussaint (2003): The evolution of genetic representations and modular neural adaptation. Submitted (in April) version of my PhD thesis; a revised, official version published as a booklet will follow.