A while back I was looking through my 1970s Funk & Wagnals’ Wildlife Encyclopedia and read the entry on River Dolphins. In it a particular passage caught my eye because it was not very parsimonious.

We usually take it for granted that because whales, porpoises and dolphins are so obviously descended from land animals, their ancestors must have returned directly to the sea. As a result, it is something of a surprise to learn there are such animals as river dolphins, and we suppose they have come up rivers from the sea. In fact, the ancestors of dolphins could just as easily have left the land fro the rivers, and later invaded the sea. This is supported by the primitive characters exhibited in the skeletons of the freshwater dolphins. In most whales, porpoises and dolphins the seven neck vertebrae are squashed together and fused, and the animals have no visible neck. In freshwater dolphins the vertebrae are separate and there is still some sign of a neck. Also, the skull of a freshwater dolphin has not undergone the same fundamental changes as the skulls of its marine relatives, and in several ways is more like the skull of the extinct dolphin Squalodon of 15 millions years ago.

The problem of this hypothesis is that it requires the river dolphins of the Amazon, Ganges, Yangtze, etc. to all be autochthonous and essentially unrelated, since those river systems are separated by good span of geography. So I went digging to see how science has progressed in 30 years, and found this gem.

The world’s river dolphins (Inia, Pontoporia, Lipotes and Platanista) are among the least known and most endangered of all cetaceans. The four extant genera inhabit geographically disjunct river systems and exhibit highly modified morphologies, leading many cetologists to regard river dolphins as an unnatural group. Numerous arrangements have been proposed for their phylogenetic relationships to one another and to other odontocete cetaceans. These alternative views strongly affect the biogeographical and evolutionary implications raised by the important, although limited, fossil record of river dolphins. We present a hypothesis of river dolphin relationships based on phylogenetic analysis of three mitochondrial genes for 29 cetacean species, concluding that the four genera represent three separate, ancient branches in odontocete evolution. Our molecular phylogeny corresponds well with the first fossil appearances of the primary lineages of modern odontocetes. Integrating relevant events in Tertiary palaeoceanography, we develop a scenario for river dolphin evolution during the globally high sea levels of the Middle Miocene. We suggest that ancestors of the four extant river dolphin lineages colonized the shallow epicontinental seas that inundated the Amazon, Paran, Yangtze and Indo-Gangetic river basins, subsequently remaining in these extensive waterways during their transition to freshwater with the Late Neogene trend of sea-level lowering.

In the paper, they estimate the relationships among river dolphins and other cetaceans using genetic data. Their phylogeny agrees well with phylogenies derived from the fossil record and suggests that the lineages of river dolphins predate the Delphinoidea radiation. (Click for larger view.) 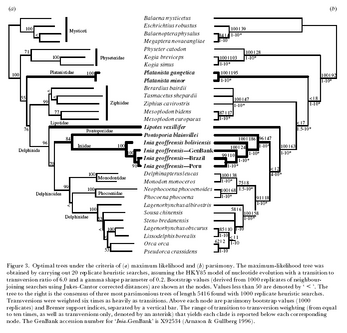 Using phylogenies, the fossil record, and geological data, the authors propose that river dolphins are the remnants of ancient branches of the odotocetes, which adapted to freshwater conditions as their shallow sea habitats became river systems. Living in these river systems “protected” them from the Delphinoidea radiation which wiped out their maritime relative. Since “modern” characteristics are those of the Delphinoidea, this explains why the river dolphins are seen as having “primitive” characteristics.

We propose that the ancestors of the four extant river dolphin taxa were inhabitants of Miocene epicontinental seas. Draining of the epicontinental seas and reduction of the nearshore marine ecosystem occurred with a Late Miocene trend of sea-level regression, which continued throughout the Pliocene, interrupted by only moderate and relatively brief events of sea-level rise (Hallam 1992). As sea levels fell, these archaic odontocetes survived in river systems, while their marine relatives were superceeded by the radiation of Delphinoidea.

So biology marches on once again.

If anyone wants to play around with the data from the paper, it can be found here.