One of the items in this outline of the debate is a recurring theme for Behe.

Behe has brought up Doolittles alleged “mistake” several times. Would it surprise you that Behe is being less than forthright?

Well, aside from Behe’s flawed logic in that quote (assuming Behe was correctly reported), here is what Russ actually said in the Boston Review article. This is near the end of a longish article.

” Let me conclude by mentioning that support for the Yin and Yang scenario is now coming from another quarter. Thus, it has become possible during the last decade to “knock out” genes in experimental organisms. “Knockout mice” are now a common (but expensive) tool in the armamentarium of those scientists anxious to cure the world’s ills. Recently the gene for plaminogen was knocked out of mice, and, predictably, those mice had thrombotic complications because fibrin clots could not be cleared away. Not long after that, the same workers knocked out the gene for fibrinogen in another line of mice. Again, predictably, these mice were ailing, although in this case hemorrhage was the problem. And what do you think happened when these two lines of mice were crossed? For all practical purposes, the mice lacking both genes were normal!6 Contrary to claims about irreducible complexity, the entire ensemble of proteins is not needed. Music and harmony can arise from a smaller orchestra. No one doubts that mice deprived of these two genes would be compromised in the wild, but the mere fact that they appear normal in the laboratory settingis a striking example of the point and counterpoint, step-by-step scenario in reverse!”(emphasis added by IFM)

Now, let’s be clear what Doolittle is stating here. 1) The example shows the interaction between regulatory proteins in the cascade. The modern clotting system is a balance between pro-coagulation factors and anti-coagulation factors (the Yin and Yang as he calls it)

The main point was to demonstrate that the delicate balance of forward and reverse reactions that regulate blood clotting came about in a step-by-step fashion. I summarized events with the metaphor of Yin and Yang, and emphasized that other similar point-and-counterpoint comparisons could be made.

2) The example shows that simpler systems than the full system can work in laboratory situations. 3) The mice in the example wouldn’t survive in the wild

Note that Doolittle is clearly relating the recovery in the double knockout mice to the excessive coagulation defects in the plasminogen knockout mice, not the overall life history of the mice (see below for some of the amazing results from the actual paper).

Behe has responded to Doolittle in several fora, saying he made a mistake. In this article Behe, quotes part of the paragraph. Behe carries on as if Doolittle thought these mice were excatly the same as wild-type mice in all respects. However, Behe omits the last section of Doolittle’s paragraph, with its qualifications and statement that these mice are by no means identical to ordinary mice and wouldn’t survive in the wild. At the most Doolittle is guilty of using jargon (compromised rather than die; however, researchers still tend to write that animals were sacrificed, rather than animals were killed, when describing experiments). It is Behe who is doing the mischaracterising, not Doolittle.

Clotting occurs by a cascade of reactions initiated by either tissue damage (the extrinsic pathway) or contact with surfaces such as the basement membranes of blood vessels (the intrinsic or contact pathway). The ultimate effect of this cascade is to convert the soluble protein fibrinogen to the insoluble protein fibrin, which forms the basis of the clot that stops bleeding.

Note that this is the critical final step in clotting. Now, what happens when we knockout the gene for fibrinogen, making the mice unable to form fibrin (and hence clots)? Nothing much really. In the laboratory the fibrinogen knockout mice (Fib-/-) live normal lives with minor defects. They can’t carry a pregnancy beyond mid-term, but they should be dead from massive bleeding a day or two after birth, not living well into breeding age. The reason is that the clotting system not only stops bleeding from cuts and wounds, it also maintains the integrity of the blood vessels. Without a low level of clotting activity, the blood vessels (mostly the small ones) leak [note1].

Not only do the Fib (-/-) mice fail to die catastrophically after birth, but they fail to bleed to death from full skin thickness incisions. Remember, that fibrin is the ultimate product of the clotting pathway, yet these mice are coping well in the laboratory (in the wild they would probably be dead rapidly, researchers with scalpels are kinder than cats, pointy sticks and other natural hazards). Why is this so? Almost certainly because platelets are plugging the blood vessels and slowing the bleeding until ordinary serum proteins glob up [2]. This is of interest because this is basically the mechanism that primitive chordates such as tunicates use.

So far I have just talked about establishing a clot by forming fibrin. However, when the blood vessel is repaired the fibrin has to be cleared away. This is performed largely by the enzyme plasmin, generated from its inactive precursor, plasminogen. This is part of the balanced “Yin/Yang” system that Doolittle talks about. Plasminogen knockout mice (Plg-/-) have no plasminogen. The Plg(-/-) mice are very sick. They fail to gain weight, have very poor wound healing, have numerous pathological changes and all die within 300 days [1].

So what happens when we knock out both plasminogen and fibrinogen? With both of these essential components gone the mice should be even sicker, right? Wrong! Plasminogen/Fibrinogen double knockouts gain weight almost at the rate normal mice do, have wound healing almost indistinguishable from normal mice and live for virtually the same time as normal animals. They do have a few pathological changes, but as Doolittle says, “for all practical purposes” these animal are normal (see the following figures, they are pretty amazing). 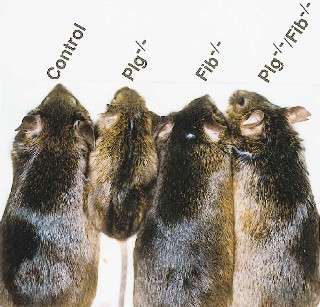 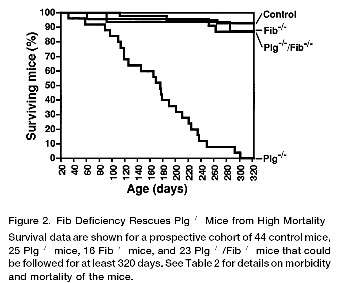 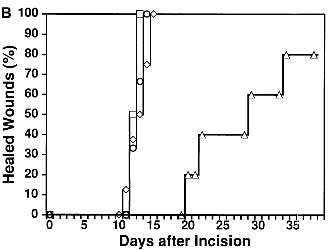 Wound healing, the plasminogen knockout mice (triangles) heal very slowly, while the Plg(-/-),Fib(-/-) mice (diamonds) not only fail to bleed to death immediately, but heal almost as fast as normal mice (squares).

Now, let me emphasise again that these animals fail to bleed to death catastrophically or do any of the horrible things that one would expect from Behe’s “irreducibly complex” scenario. As Doolittle says, this shows the Yin/Yan aspect of coagulation, with checks and balances that can be built up step by step.

Now, fibrinogen knockout mice cannot carry a pregnancy beyond day 10, neither can the double knockout mice. This is not particularly significant when by Behe’s ideas these mice should be dead shortly after birth, but conspicuously aren’t. In the wild, they wouldn’t be able to breed, but in the wild they would be dead long before breeding age. The way Doolittle frames his brief discussion, given the limitations of a newspaper article (“No one doubts that mice deprived of these two genes would be compromised in the wild”) is perfectly compatible with the facts of the Bugge et al., paper.

They [the double knockout mice] are decidedly not promising evolutionary intermediates.

Doolittle never claimed they were (“No one doubts that mice deprived of these two genes would be compromised in the wild”); after all, clotting evolved in protovertberates with low-pressure blood systems, not modern vertebrates (3,4). What Doolittle was pointing to was how the systems interact with each other, and how systems could be built up piecemeal. Behe seizes on a minor point, only made possible by not quoting the full text of Doolittle’s paragraph, and ignores the fact that fibrinogen deficient mice don’t bleed to death immediately after birth, as his scheme would predict.

This is not the only thing Behe has ignored. Miller has pointed out to Behe that whales and dolphins lack the contact pathway (Factor XII or Hageman Factor) (5). Furthermore, puffer fish don’t have the pathway either (3). So two groups of vertebrates can live happily without a major arm of the clotting cascade. Behe has not addressed this. This is a larger omission than Doolittle’s.

In summary, Behe misrepresents Doolittle. Basic courtesy would at least require Behe to include the full Doolittle paragraph in his articles, let alone ceasing to claim Doolittle made a mistake [note 3].

[note2] While its is easy to imagine a trysin-like enzyme chopping bits off a previously soluble protein to make it insoluble, making a protoclot, one issue that has been raised is how do you stop this primitive trypsin-like enzyme from clotting the entire blood, rather than where it is needed. A clue comes from the primitive chordate Amphioxus. It has trypsin circulating in its haemolymph (it doesn’t have blood like vertebrates), when the animal is injured, trypsin cleaves a bit off an enzyme activating the enzyme, which in turn produces a polymeric melanin which acts as a kind of glue to immobilize bacteria. Why isn’t trypsin activating this enzyme all the time? Trypsin is only activated in the presence of caclium released by tissue damage. This is a primitve, one step version of the calcium-activated clotting cascade. Pang Q, Zhang S, Wang C, Shi X, Sun Y. Presence of prophenoloxidase in the humoral fluid of amphioxus Branchiostoma belcheri tsingtauense. Fish Shellfish Immunol. 2004 Nov;17(5):477-87.

[note 3] At least one other webpage has Behe partly quoting Doolittle’s statement and omitting the qualifier, as well as proceeding as if the qualifier wasn’t there. Behe also repeats it often in lectures and talks.

Worse, the tale has grown in the telling.

Writing in a church magazine, http://www.floridabaptistwitness.com/3746.article Charles Colson had this to say…

Soon after the book was published, its thesis was challenged by the leading expert in America on cell structure, Dr. Russell Doolittle at the University of California. He cited a scientific study supposedly disproving irreducible complexity. Behe immediately researched it and found it proved just the opposite: It confirmed him. So Behe went back to Dolittle. In a phone conversation, Doolittle admitted he was wrong, but he has never made a public retraction.

Is this story true? Far from it. Mark Perakh emailed Dr. Doolittle, who generously allowed his reply to be quoted.

Thanks for sending me the latest on the desperate tactics that these people avail themselves of. Others have written me in the past about my alleged “concession.” What happened is that Behe emailed me after my article appeared and challenged my tail-end assertion about the Bugge et al paper. I went back and read it more carefully, and indeed, I had overstated one aspect. It was inadvertant, and I apologized. Ah, rue the day with minds like theirs!

In my paper I raised the point of how mice without plasminogen were severely ill. Mice without fibrinogen are also unwell, although not as badly off as the plasminogen-lackers. However, the big point was that mice lacking both genes were considerably better off than the ones that only lacked plasminogen. I had said these mice were “..for all practical purposes..normal,” although I went on to qualify the statement about how the mice would doubtless be compromised in the wild. In fact, the paper makes it clear that the mice are not “normal” in that they don’t breed well, even though the individuals are not unwell. My original point, lost in all the persiflage, was that there is a “point and counterpoint” in the evolution of these two genes, as there is in the evolution of many interacting systems.

It’s truely annoying that the creationists (“Intelligent Designers”) get so much much mileage out these side-issues and refuse to confront the main message.
Regards,
Russell Doolittle

Who should make the retraction? Not Doolittle.

Web resources on the evolution of clotting. http://www.talkorigins.org/origins/postmonth/feb97.html

Miller on the evolution of clotting

[IFM is not an active researcher in the coagulation field, but my first ever research project was studying the effects of snake venom on coagulation, I still have the platelet electron micrographs taken nearly 20 years ago.]