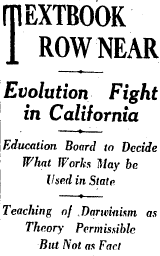 At some point during the last year I realized that nothing really ever changes in creationism, except perhaps the labelling. This probably occurred in-between the discovery that “intelligent design” originated in 1987 as a new label for the creationism just that year ruled unconstitutional in Edwards v. Aguillard, and watching William Buckingham testify at how personally offended he was that the Dover teachers dare teach just a little bit of the evolution that the Pennsylvania state standards required.

Sometimes, though, not even the labels change. Take the Cobb County “theory not fact” sticker which was stuck in every Cobb County biology textbook as a warning label against evolution. It is on my mind because, while it was been ruled unconstitutional in the January 2005 district court decision Selman v. Cobb County, the hearing for the appeal is scheduled for this week, Thursday, December 15.

Now, “theory not fact” policies are sometimes described as a “new” creationist tactic. But I recently came across some information which dates such policies straight back to good-ol’ days of the Scopes Era, the mid-1920’s, when men were men, monkeys were monkeys, evolution was in effect banned from the textbooks, no one was pretending that protecting Biblical literalism wasn’t the key issue, and William Jennings Bryan was barnstorming around the country decrying the evils of evolution.

The first “theory not fact” policy was in fact passed by the California State Board of Education in 1924-1925. The policy was adopted as – guess what – the Board’s accommodation to fundamentalists protesting the teaching of evolution in California. In 1925, the Board took this policy and applied it to textbooks, turning down those that dared treat evolution as anything more than a (colloquial) “theory.”

Education Board to Decide What Works May be Used in State

Teaching of Darwinism as Theory Permissible But Not as Fact

SAN FRANCISO, July 21. – The State Board of Education will decide Thursday morning precisely what text-books on evolution may be taught in the schools of California. The basis of selection will be whether the text presents evolution simply as a theory or as a fact. If the book says that evolution is a fact the board, sitting in solemn conclave at the Fairmont Hotel, will consign the volume to the bottom of the bay and points south.

Caught between two fires, the board has declared that evolution as a theory is permissable. One by one the text-books will come up for judgement, and the main fight is expected to develop over the “suspended list.”

There are approximately sixty of these books. The board has previously looked them over and labeled them “doubtful.” They were not definitely barred, but the board appointed a committee of educators, headed by President W. W. Campbell of the University of California, to examine the books. That was last April, and the committee duly turned in a favorable recommendation. So far, however, the board has not adopted the texts as official.

Maynard Shipley, president of the Science League of America, will be present in person Thursday morning to insist that these books be given an official rating. Representatives of the fundamentalists are also expected to be on hand, fighting against their adoption. Advance indications are that the session will be a warm one.

If you have access, be sure to click on Page Image – PDF in the lower right-hand corner. This is the front page of the LA Times, the day after the Scopes Trial verdict was handed down. So, there are screaming headlines: “SCOPES CONVICTION PAVES WAY FOR LEGAL STRUGGLE”, “TEXTBOOK ROW NEAR”, “EVOLUTION TRIAL COST $25,000”, and a cartoon featuring Bryan, Darrow, and an ape, entitled, “‘When Shall We Three Meet Again?’.”

The bewildering disparity in opinion about the impact of Scopes on the anti-evolution movement – from the immediate verdict for the defense in the eastern press to Szasz’s recent verdict for the prosecution – highlights the unexpected resilience of this cause despite its pounding at Dayton. This is revealed in the legal actions following the Scopes trial and Bryan’s death. During the months following Bryan’s death, dozens of evangelical leaders rushed to pick up the fallen mantle, loosing a frenzy of uncoordinated and often localized legal activity against evolutionary teachings. [88] Three days after Bryan died, anti-evolution legislation was introduced in Georgia, one of the few states where the legislature remained in session. In 1926, three of the nine state assemblies meeting that year faced such bills, a record number for a legislative off-year. When the bulk of state legislatures next convened in the spring of 1927, eighteen different anti-evolution bills appeared in fourteen widely scattered states, an all-time high in both categories. A final introduction two years later in Texas rounded out the decade. [89]

Supplementing this legislative activity, some state and local educational boards took the initiative in moving against evolutionary teaching. A year before the Scopes trial, the state Board of Education in California had directed teachers to present Darwinism “as a theory only” while the North Carolina Board had barred state high schools from using biology textbooks that “in any way intimate an origin of the human race other than that contained in the Bible.” [90] A few months after Scopes, the Texas Textbook Commission, acting at the insistence of Governor Miriam Ferguson, ordered the deletion of evolution from all public school texts. The Louisiana Superintendent of Education took similar steps the following year. Scattered local restrictions against evolutionary teaching also cropped up across America during the late twenties. Despite these administrative successes, legislative relief remained the primary legal objective for anti-evolution crusaders during the first few years after the Scopes trial. [91]

In creationism, it appears, there really is nothing new under the sun.