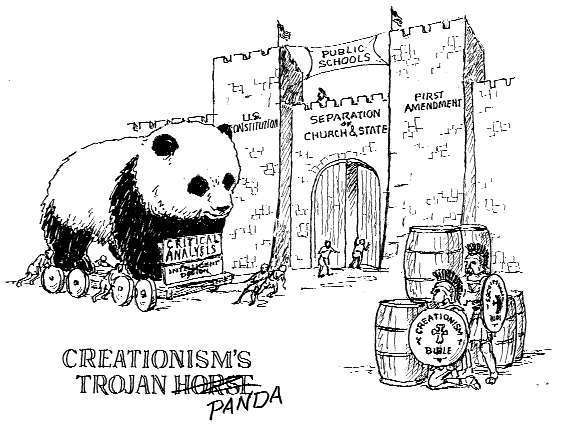 In the February 24, 2006 edition of Science, Constance Holden writes about the devastating loss for Intelligent Design activists in Ohio.

Scientists are hailing the demise of an attempt in Ohio to sneak intelligent design (ID) into the public school science curriculum under the guise of a “critical analysis” of evolution. Last week, the Ohio Board of Education voted 11-4 to strike the words from its curriculum guidelines along with a creationist-inspired study guide. Evolution supporters called it a “stunning victory” and cited the influence of the December court ruling against the Dover, Pennsylvania, school board in the first test case of injecting ID into biology classes (Science, 6 January, p. 34).

Indeed, while some have denied that the Dover decision would be a Waterloo for Intelligent Design, the Dover ruling seems to have played a significant role in the stunning reversal of the Ohio State Board of Education.

What surely must have helped is Judge Jones’ observation that ‘teaching the controversy’ is just an insincere effort to introduce Intelligent Design into school curricula. Also, the board members were shown how independent scientists had described the lesson plan in very unflattering terms. Several of the board members, when confronted with the evidence, changed their position.

“Some of my colleagues have changed their perspective” after realizing that the lesson plan “did indeed contain elements of ID that was not apparent to them before,” says Robin Hovis, a Republican board member who opposed the plan. Virgil Brown, who originally supported the plan, says he changed his stance after he realized the language “was supportive of ID.” Martha Wise, who spearheaded the vote, says the outcome reflects a “sea change” in the 19-member board–a change aided by the recognition following the Dover case that “it might be a legal problem that would cost Ohio millions of dollars.”

We can thank the hard work of the many Ohio citizens who have spent time and effort in battling the latest attack on public education. In addition, Ohio has exposed how ID activists are using the ‘teaching the controversy’ as a cloak for ID.

Many see the Ohio vote as a severe blow to attempts to cloak ID under the guise of “teaching the controversy.” Kansas is now the only state with this phrase in its science standards. Whether Dover has set off a domino effect may be clearer next month when the South Carolina board of education meets to consider adding to its science standards a statement that students should be able to “investigate and critically analyze aspects of evolutionary theory.”

Slowly the real facts are unravelling and a last minute attempt to change the Board’s position via a ‘poll’ also may have backfired.

Officials at the Discovery Institute, a Seattle, Washington-based think tank for ID, did not respond to a request for comment. A press release claims the school board had been “bullied” into “censoring teaching of evolution” and cites a recent Ohio poll indicating that 75% of the respondents believe ID should be taught along with evolution. But biologist Patricia Princehouse of Case Western Reserve University in Cleveland, Ohio, says anyone can play the survey game. Another recent poll, she says, showed that 84% of the respondents had never heard of ID.

So let’s look at the questions asked in the Zogby (Discovery Institute) poll?

“When Darwin’s theory of evolution is taught in school, students should also be able to learn about scientific evidence that points to an intelligent design of life.”

B) Biology teachers should teach Darwin’s theory of evolution, but also the scientific evidence against it.

But teachers teach more than just Darwin’s theory of evolution. Present day evolutionary theory has evolved quite a bit and we know that some of Darwin’s ideas were wrong. But his concept of natural selection still plays a very important role in evolutionary theory.

Whether they knew anything about it or not, respondents were then given a brief description of the concept of intelligent design identical to the one used in a statewide Cleveland Plain Dealer Poll conducted this past spring: “The concept of ‘intelligent design’ is that life is too complex to have developed by chance and that a purposeful being or force is guiding the development of life.”

They then were asked: “What is your opinion-do you think the concept of ‘intelligent design’ is a valid scientific account of how human life developed, or is it basically a religious explanation of the development of human life?”

And that my friends is “the rest of the story”