Because I’ve apparently been living in a cave, I only just heard the full story of the “Tripoli Six”: five foreign nurses and a doctor that the Libyan government has imprisoned for seven years, tortured, and sentenced to death by firing squad for allegedly causing an outbreak of 400 cases of AIDS in a Libyan children’s hospital in 1998. Apart from the problems with torture and firing squads, the major problem here is that these poor people didn’t do it. The infections were caused by poor hygiene practices, like reusing needles, that existed at the hospital long before these nurses arrived in 1998. But the Libyan government is scapegoating some foreigners to distract the populace from the fact that the government is the real criminal here.

What does this have to do with evolution, you ask? Well, out here in the real world (outside of Libya and creationist circles), the way you tell where an HIV strain actually came from, and when, is by doing a standard molecular phylogeny. If you are a creationist who doesn’t believe in this sort of thing then you should really just stuff it, because the criminal courts, relying on their “beyond reasonable doubt” standard, have been using phylogenetic methods as forensic evidence for years (so much so that an HIV phylogeny was used on the TV show CSI).

The co-discoverer of HIV, Luc Montagnier, and other scientists, have already told the Libyan court that the Tripoli Six couldn’t possibly be responsible, since the HIV infections occurred both before 1998 and after the Six were arrested (Nature has Montagnier’s report online (free PDF)). The first time this happened, in 2003, the Libyan court ignored their report and sentenced the Six to death anyway. Their lives were saved, temporarily, because diplomatic pressure forced the Libyan government to throw out the original trial and give the Six another chance. So a second trial was held this year, again with scientific testimony, and the verdict and sentencing are scheduled for December 19 – only 12 days from now.

Just yesterday, Nature, which has been beating the drums about this since September, published (free PDF) a fast-tracked paper from the lab of evolutionary biologist Andrew Rambaut of the University of Edinburgh, formerly of the Oxford Evolutionary Biology Group.

Basically, with molecular phylogenetics and statistical modelling, Rambaut and co. were able to prove that each of the various HIV-1 strains found in the Libyan children had a common ancestor that predated March 1998, the time when the foreign nurses arrived. More than that, all of the 95% confidence intervals for the estimated date of common ancestry of both the HIV-1 virus, and three strains of HCV (Hepatitis C), another blood-born pathogen which was co-infecting patients, all fall months-to-years before March 1998. This means that nosocomial (hospital-acquired) infections had been occuring for years.

Here is the chart: 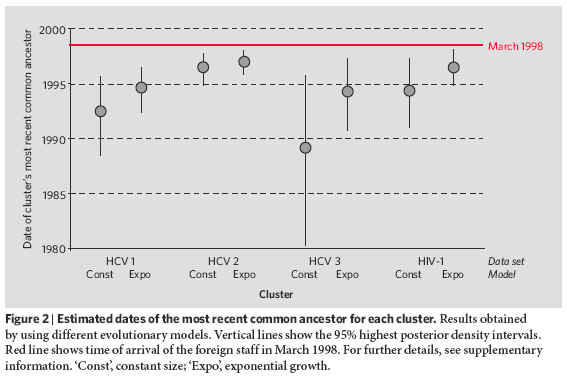 Unless you are a creationist, this quantitiatively proves that these strains were being passed around at the hospital before the foreign nurses were even in the country. This result, from an independent lab, confirms what Montagnier and others have already testified to.

The Scottish newspaper The Herald has a really incredible story reviewing the whole situation and the evolutionary science involved. Here is a quote:

In desperation, human rights organisations launched a last-ditch appeal to scientists around the world to find definitive evidence that would exonerate the group. Today, with just 12 days until the verdict, that call has been answered – thanks, largely, to the ingenuity of an Edinburgh scientist.

Dr Andrew Rambaut had only just arrived in his new office at the Institute of Evolutionary Biology in October when the telephone rang. It was Professor Tulio de Oliveira, Rambaut’s former colleague at Oxford University, who had been asked to head up a coalition of international experts to provide the missing evidence: the precise date of the HIV outbreak in the Libyan hospital, a secret hidden within the DNA of the virus itself.

He set out to date the outbreak using a technique similar to that used by taxonomists to date the evolution of a species. His program began comparing HIV samples taken from 51 of the 426 children. Each child had a slightly different lineage of virus, but each lineage had evolved from a common ancestor – a single strain of virus with a single DNA sequence.

Over two fraught weeks, the program was able to determine the original virus sequence, and reconstruct the exact phylogeny, or family tree, of the outbreak. Each new branch in such a tree is due to a mutation – a tiny change in the virus DNA sequence as the virus transmits from person to person.

Now, here comes the clever part. The rate of these mutations is almost constant – so regular that you can mark time by it. Thus, by beginning at the children’s HIV sequences and travelling backwards through the branches, the computer was able to count the mutations and thus determine the length of time that had passed since the first infection in the hospital.

It showed that the strain of HIV with which the children had been infected was a West African subtype, which had clearly been present and spreading locally in the mid-1990s, long before the medics arrived. If the “molecular clock” was stopped on the day they arrived, in March 1998, it would show that the original virus had already branched into many, many different viruses – a sign that it had already been transmitted many times between people within the hospital.

The journal’s editors have fast-tracked publication to make this new evidence available before the verdict – but whether that will be enough to save the Tripoli Six from the firing squad is a question no computer program can answer.

“It’s not my place to comment on the outcome of the case,” says Rambaut. “But I’m hopeful that something will come of this.”

The bloggers at scienceblogs.com have already been raising a ruckus over this. Go here for all the links, and go here to find out what to do – write a letter to your representative at least. If Libya doesn’t let these people go I think we’ll be seeing protests outside the Libyan embassy and calls to cut off scientific and educational contacts with Libya (if there were any to begin with).

And yes, promoting evolutionary biology is a distant second here compared to the primary issue of saving innocent human lives, but it is worth pointing out that the question of ignoring evolutionary science really can be a matter of life and death.