Over at Uncommon Descent, Gil Dodgen asks the question of why so many engineers reject evolution. Dave Scot then asks a similar question about doctors. Not surprisingly, their answers to these questions are self-serving and backed up only by wishful thinking. Dodgen quotes Stephen Meyer as saying that because engineers know all about “design”, they are therefore in a unique position to know about biology. (As a corollary, I suppose biologists must have special insight when it comes to designing bridges.) Even more amusing is Dave Scot’s explanation for why doctors supposedly reject evolution. They are risk adverse. I’ll let others ponder the logic of that one.

But all of this begs the question: How many doctors (or engineers) reject evolution, and why do they do so? I think the question is worth looking at, even if just for fun. So let’s do something that the denizens of UD would consider totally alien – let’s look at some data.

Lucky for us, the Louis Finkelstein Institute recently conducted a survey on the beliefs that doctors have concerning evolution and “intelligent design”. The headline for the survey was that a majority of doctors, 63%, preferred evolution over ID. Still, that leaves a fairly sizable minority, 34%, who agree with the ID position. Unfortunately, it’s hard to know what to make of such numbers. Thanks in large part to the obscurantist tactics of its major proponents, “intelligent design” is a fuzzy concept that has any number of possible meanings among lay people. For example, a lot of people seem to think that ID is equivalent to theistic evolution, a position held in contempt by the leading ID advocates. It’s also difficult to compare different surveys against each other, given that (especially for this issue) the answers tend to be extremely sensitive to the wording of the question. For example, any question that makes a reference to God or the Bible will tend to elicit a more positive response than one that doesn’t, even when the questions are essentially the same.

Fortunately, the Finkelstein survey does contain one question that is directly comparable to that asked of the general public in a CBS News poll conducted around the same time. That question asks people about their views on evolution and gives them three choices: The first is that humans were created by God essentially as they are now; the second is that humans have evolved with God guiding the process; and the third is that humans have evolved without God’s guidance. Although the wording differs slightly between the two surveys, the differences are trivial and shouldn’t make any difference in how people respond. Thus I submit that this is the best comparison between surveys that we’re likely to find. I’ve put the results together into a single chart: 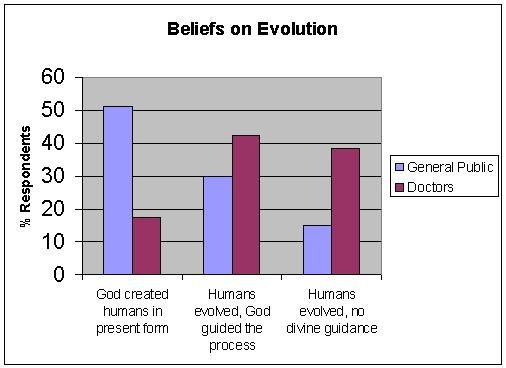 We can see that the results are quite striking. Doctors are far less likely to believe in the explicitly creationist position than are the general public. They are also far more likely to believe that evolution occurred without divine guidance. Overall, the acceptance of evolution among doctors is around 80% (actually 78% when asked the question directly) whereas it’s only around 45% for the general public. So contrary to the self-congratulatory beliefs of the UD folks, it is not the case that being a doctor somehow makes one more prone to being a IDist/creationist. In fact it makes one much less prone. While some of this may be due to the fact that more educated and affluent people are more likely to accept evolution, much of it is probably due to the medical training that doctors receive. That makes Dave Scot’s remarks all the more ironic. (One quick note: The Gallup organization has been conducting a similar poll for a long time, though they include a 10,000 year age for the human species are part of question #1. Even still, the results for the general public are highly similar to those above. However, if I had included those results broken down by college education, the college educated would have sat somewhere in between the general public and doctors in the above chart. Because I couldn’t find any data for this more recent than 1991, I left it out, but it supports the notion that there is more than just general education that leads doctors to accept evolution.)

It is true of course that doctors are more prone to being creationists than scientists in general and biologists in particular. This is to be fully expected, as it’s unlikely that you’re going to find any one group of people who are more convinced about evolution than biologists and other scientists. But the fact is, we see a steady increase in the acceptance of evolution when we move from the uneducated to the educated, and from those whose educations are irrelevant to evolution towards those who are more relevant. Thus, the prevalence (or rather paucity) of creationist doctors has a simple explanation.

Much the same can be said of engineers. The perception that there exists a large number of creationist engineers has actually spawned its own bit of internet folk wisdom, known as the Salem hypothesis. Although there are no survey data for engineers specifically as far as I know, I strongly suspect that the percentage of engineers who accept evolution is similar to (though probably somewhat less than) that of doctors. Which is to say, an engineer is far less likely to be a creationist than is a member of the general public, yet is more likely to be a creationist than is a scientist. Assuming this is the case, it doesn’t really require any special explanation.

Ironically, ID/creationists are very keen on giving the impression that they have quality credentials, in spite of the fact that they are very quick to dismiss and vilify the vast majority of credentialed scientists. The propaganda put out by the Discovery Institute and other creationist organizations will always mention an advanced degree held by one of their own. This is true even when the degree is of highly questionable relevance. If it seems like there are a lot of engineers and doctors espousing ID, it’s probably just a manifestation of this tactic.

(Cross-posted to Sunbeams From Cucumbers.) Update: Dave Scot throws a childish temper tantrum over at UD, claiming that I “trots out a strawman - [that] ID and “evolution” are mutually exclusive”. Except of course I didn’t. Nowhere do I say that evolution and ID are mutually exclusive. The Finkelstein survey pits them that way, but that’s exactly why I used a question that gives people more than two choices. The fact is, no matter what flavor of IDism/creationism one espouses, the survey data make it abundantly clear that doctors are much less likely to buy into it than are the general public. If doctors are therefore considered to hold some sort of special insight into the evolution debate, this does not bode well for the IDists. That is the substance of the post, and naturally Dave Scot totally ignores it. It appears that in his intellectual dishonesty, he’s reduced to slaying strawmen. :)