Various ID proponents have shown a confusion about Darwinism and neutrality, arguing that these concepts are contradictory rather than complementary and that the existence of one negates the existence of the other. Such a false duality is commonly found in the writings and musings of ID proponents who insist on elimination to infer the existence of one of many alternatives. So lets explore in further detail the concept of neutrality and its relevance and importance to evolutionary science (and by logical extension also the vacuity of Intelligent Design).

I am inclined to suspect that we see, at least in some [cases], variations which are of no service to the species, and which consequently have not been seized on and rendered definite by natural selection…. Variations neither useful nor injurious would not be affected by natural selection, and would be left either a fluctuating element, as perhaps we see in certain polymorphic species, or would ultimately become fixed…. We may easily err in attributing importance to characters, and in believing that they have been developed through natural selection;… many structures are now of no direct use to their possessors, and may never have been of any use to their progenitors…. [On the other hand,] we are much too ignorant in regard to the whole economy of any organic being to say what slight modifications would be of importance or not.

As early as 1985, Hartl et al published a paper outlining what they called limits of adaptation: the evolution of selective neutrality and conclude that When considered from a certain perspective, the superficial inconsistency between Darwinian selection and neutral evolution disappears completely.

At this point, many mutations that result in small changes in activity will result in negligible changes in fitness and will be selectively nearly neutral. We propose that this process is a mechanism whereby conditions for the occurrence of nearly neutral mutations and gene substitutions can be brought about by the long-continued action of natural selection. Evidence for the hypothesis derives from metabolic theory, direct studies of flux, studies of null and other types of alleles in Drosophila melanogaster and chemostat studies in Escherichia coli. Limitations and complications of the theory include changes in environment or genetic background, enzymes with sharply defined optima of activity, overdominance, pleiotropy, multifunctional enzymes and branched metabolic pathways. We conclude that the theory is a useful synthesis that unites many seemingly unrelated observations. The principal theoretical conclusion is that the conditions for the occurrence of neutral evolution can be brought about as an indirect result of the action of natural selection.

Since 1985, much research has shown how neutrality is not only essential for evolvability but that neutrality is subject to selection (Toussaint). It should therefor not come as a surprise that science has found how neutrality or near neutrality plays important roles in evolutionary processes. Whether found in RNA evolution (Schuster, Stadler, Fontana and others), protein evolution, viral evolution, neutrality keeps popping up as an important and essential factor to the success of evolution. And lets not forget Sergey Gavrilets whose work has shown how the high dimenstionality of fitness landscapes of real biological systems opens up a whole new paradigm of ‘holey landscapes’

Gavrilets work, not surprisingly, has remained ignored by most Intelligent Design proponents as it undermines their major premise that Darwinian evolution cannot explain the diversity of life because of the existence of large valleys that cannot be crossed.

So it should not come as a surprise that Sewell Wright’s selective landscape pictures of hill climbing are flawed and that the properties of high dimensional fitness landscapes are very different from low dimensional ones (Gavrilets, Harvey) 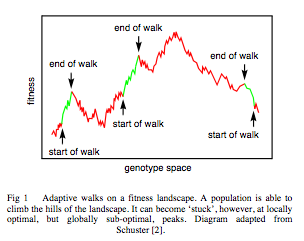 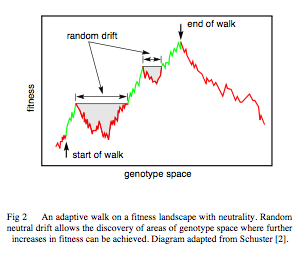 Both figures from R Shipman, M Shackleton and I Harvey The use of neutral genotype-phenotype mappings for improved evolutionary search BT Technol J Vol 18 No 4 October 2000

In his PhD thesis, Harvey shows how the concept of ‘optimized search’ is inappropriate for evolution where the dimension of genetic space increases due to gene duplication and other similar processes. Remember how ID proponents made a ‘big deal’ out of the ‘fact’ that evolutionary processes cannot be innovative because of the fixed dimension aspect? Seems that gene duplication is but one way to show how such a position remains scientifically vacuous. As Harvey observes

However, it is generally accepted that the design of robust mobile robot control systems is highly complex because of the extreme difficulty of foreseeing all possible interactions with the environment; and the interactions between separate parts of the robot itself.

In other words, rational design of such systems quickly becomes unfeasible. So how to resolve this? Not surprisingly Harvey shows how evolution comes to the rescue. And while ID proponents have raised various objections to evolutionary algorithms, such as the claim that such algorithms can create apparent but not actual complex specified information (Dembski), a proper application and understanding of the concepts of evolution, high dimensional fitness landscapes, neutrality and drift and the fact that the dimension of the genetic space is variable all help understand why the objections by ID proponents are mostly vacuous.

PS: A plug for Gavrilets’ book “Fitness Landscapes and the Origin of Species”

Fitness Landscapes and the Origin of Species presents both an overview of the forty years of previous theoretical research and the author’s new results. Sergey Gavrilets uses a unified framework based on the notion of fitness landscapes introduced by Sewall Wright in 1932, generalizing this notion to explore the consequences of the huge dimensionality of fitness landscapes that correspond to biological systems.