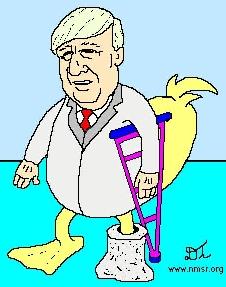 No, this post isn’t about creationist Ted Haggard and his male escort/methamphetamine scandal.

No, this new scandal involves Kevin Jackson, whose term as Mayor of Rio Rancho, New Mexico ended prematurely when he was forced to resign over a slew of allegations of financial misconduct.

So, how is Rio Rancho’s ex-mayor involved with creationism? More below the fold.

I have a column in today’s Albuquerque Tribune that focuses on Jackson and his legacy.

Now that he has resigned, it’s a good time to ponder the legacy of Rio Rancho’s ex-mayor, Kevin Jackson, whose brief tenure has been disgraceful.

I don’t pretend to be able to explain the mechanics of his mind-numbing meltdown, complete with accusations of misuse of public funds and his unwillingness to begin coming clean about his use of public money.

In light of recent events, I would like to encourage a re-examination of two of the man’s prized issues: creationism and abstinence-only education. … Before his election as mayor, Jackson’s wife, Kathy, served on the Rio Rancho Public Schools Board of Education. There, she joined with two other board members, who just happened to be pastors at Rio West Community Church, and passed Science Policy 401 in 2005.

This policy essentially paved the way for creationism by redefining science from something that must continually be tested rigorously to a mere collection of supposedly equally valid “interpretations” of the available data. Real science, of course, has a history littered with the corpses of thousands of discarded “interpretations.” … Jackson and his wife formed the New Mexico Family Council years ago. It has identified itself as “one of 40 Family Policy councils throughout the country which work closely with (James Dobson’s) Focus on the Family.”

Forrest went on to become the key witness proving the connections of creationism to its successor, Intelligent Design, in Judge John Jones’ historic 2005 decision in a Dover, Pa., federal court case. … The Family Council has fired Jackson and is cooperating with state investigations into financial irregularities.

At the least, I hope someone is investigating how Kathy Jackson, the council’s co-founder, was allowed to vote on giving her own organization contracts to teach abstinence programs in Rio Rancho schools.

Even with Jackson expelled from the council, the organization is still providing abstinence education through its “Best Choice” division.

It’s time for a fresh look at abstinence-only policies. A recent study showed that students taught only sexual abstinence ended up with rates of unwanted pregnancies no better than those of students who received standard health education.

When these abstinence-only programs mention birth control, it is in a derisive way, much as creationists like to mention fossils only as a way to disparage evolution. … Rio Rancho’s sex-ed policies do not meet state requirements for comprehensive sex education. However, the school board has yet to reconsider its stand.

Board member Don Schlichte, one of the pastors behind Science Policy 401, said in February that “I think we should let the state tell us we are wrong. We will go from there.”

Well, the state has since spoken. It’s time for action.

Science Policy 401 and abstinence-only education in Rio Rancho schools should be re-examined, not just because they were associated with the Meltdown Mayor, but because they are bad for the students of Rio Rancho.

For more on the Rio Rancho situation, see NMSR’s Rio Rancho Policy 401 page. This page also links to some cartoons I’ve been doing for the Rio Rancho Observer to mark the Meltdown of a Mayor.