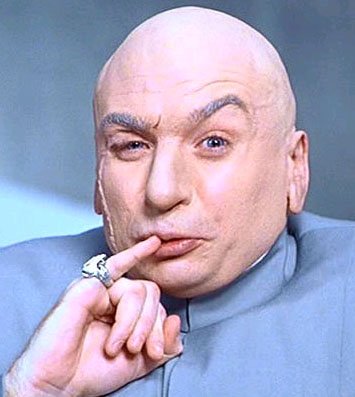 Some of you may have heard about the latest in frivolous lawsuit madness: PZ Myers and his blog’s mothership, Seed Magazine, have been sued for FIFTEEN MILLION DOLLARS.

The plaintiff of the case is none else than Dr. Stuart Pivar, NYC businessman and art collector, who burst on the evolution/creationism scene a couple years back claiming that, based on conversations he had with the late Stephen J Gould, he could assert for a fact that Gould really opposed the basic tenets of modern evolutionary theory, and the role of natural selection in particular. According to Pivar, Gould only endorsed evolutionary theory (in dozens of books and hundreds of articles, not to mention sworn court testimony!) under some sort of duress from the iron fist of the enforcers of “Darwinian orthodoxy”.

The obvious nonsense was discussed in various articles here at PT and elsewhere, but of course the absurdity of that canard was not enough to deter the usual peanut gallery of gullible Creationists, Denyse O’Leary foremost among them, from getting all excited about the matter.

Anyway, besides liberally reinterpreting Gould’s entire scientific opus, Pivar’s other personal involvement with evolutionary matters at the time was that he had published a well-illustrated tome called Lifecode, in which he apparently proposed some sort of structuralist/developmental interpretation of evolution. In a rather incautious move, Pivar decided to send his book to a real developmental biologist for review: PZ Myers. PZ read it, soundly criticized it at Pharyngula, and apparently never thought of it again until earlier this year, when Pivar sent out some grandiose-sounding press release together with an updated version of the book, both of which PZ once again trashed.

That was enough for Pivar to take his legal gloves off (or put them on, whatever), and hit PZ and Seed with a court complaint, that you can read in its entirety here. In it, Pivar claims that PZ maliciously called him “a classic crackpot”, with the intent of “holding [Pivar] up to ridicule and embarrassment in this specific area of [Pivar’s] professional endeavors”. The claim also states that this has caused Pivar “considerable mental and emotional distress” as well as financial damages, reparations for which, according to the complaint, should amount to the comically overinflated total reported above.

The suit has been discussed on several web sites already, including Scientific American, the Lippard Blog, Overlawyered and PT contributor Timothy Sandefur’s personal blog Positive Liberty. The consensus seems to be that the suit has no legs, but of course if this is a nuisance suit, ultimate success in front of a judge is not the goal. We’ll see what the courts will make of this, and hopefully it won’t be too bad of a hassle for PZ before the matter is resolved.

Addendum: Blake Stacey’s Science after Sunclipse has a handy timeline of the affair, and some more links.

IMPORTANT NOTE: Feel free to comment on the legal, socio-political and scientific implications of the matter, but please refrain from pointless (and far too easy) personal invective, or the thread will be closed.

Update 8/25/07 Peter Irons has sent an open letter to Stuart Pivar. The text is reproduced below, with Mr. Irons’s permission:

I don’t know if this is a current email address for you; I obtained it from the Internet by accessing some of your 2004 correspondence regarding the NYAA affair.

First, let me introduce myself. I am a lawyer (a graduate of Harvard Law School) and am admitted to practice before several state and federal courts, including the United States Supreme Court. I also was on the faculty of Boston College Law School and the University of California, San Diego, where I taught constitutional law from 1982 until my retirement in 2004. My legal specialty is First Amendment law, including the law of defamation, about which I have written in several books and law review articles. I mention this background, quite frankly, to impress you with my credentials in this field, which are substantially greater than those of Michael J. Little.

I might also add that I was a close friend of Stephen Jay Gould, from our college days in the 1950s until his death in 2002. Steve and I were neighbors in Cambridge for many years, and talked extensively about his work in evolutionary biology and paleontology. As an aside, if Steve were still alive, I think he would have a viable defamation action against you for your false statements about his views, but that’s a moot point.

Over the past week, I have become very familiar with your defamation suit against Seed Media Group and Professor Paul Z. Myers, about which I learned from several legal and science blogs that I follow. I have carefully read the complaint that Mr. Little filed on August 16 in the Federal District Court in New York City.

In my professional opinion, this is a very poorly drafted complaint, with no legal merit whatever. I won’t discuss its stylistic deficiencies, which are numerous and which show evidence of haste and sloppiness by Mr. Little, which Judge Scheindlin will surely notice.

On a substantive level, the complaint will never survive a motion to dismiss under Rule 12(b)(6) of the Federal Rules of Civil Procedure, for “failure to state a claim upon which relief can be based.” You allege defamation by Professor Myers on the sole basis of his characterization of the revised edition of your Lifecode book as the work of “a classic crackpot.” This was in the context of a fairly lengthy review of your book (following an earlier review of your book’s first version) that was not included or even referenced in Mr. Little’s complaint.

As Mr. Little should have known, by due diligence, Professor Myers’ characterization was protected opinion, not a false statement of fact. As such, it is immune from defamation actions. Mr. Little cited, in paragraph 21 of the complaint, a single case to support your action: McFadden v. U.S. Fidelity & Guarantee Co. (766 So.2d 20). I have carefully read this opinion, which has no precedential value in any state or federal court. The claim in Mr. Little’s complaint that in this case “[t]term ‘crackpot’ was considered as actionable as slander per se” in simply not true. This case was remanded by the Mississippi Court of Appeals to the trial court; no trial was held on this question and no subsequent opinion was issued.

More to the point, and a case Mr. Little should have discovered by due diligence, is an opinion of the U.S. Court of Appeals for the Seventh Circuit in Dilworth v. Dudley et al., 75 F.3d 307 (7th Cir. 1996). For your edification, and that of Mr. Little as well, let me summarize and quote from this opinion, written by Chief Judge Richard Posner, one of the most highly respected federal appellate judges. The case involved a book by a mathematics professor at DePauw University, in which he characterized an article by an engineer and amateur mathematicians as the work of a “crank,” a term that is synonymous with “crackpot.” In upholding the district judge’s dismissal of this defamation case under Rule 12(b)(6), Judge Posner wrote that the term “crank” is an opinion and “is mere ‘rhetorical hyperbole.’ … To call a pereson a crank is basically just acolorful and insulting way of expressing disagreement with [the author’s] master idea, and it therefore belongs to the language of controversy rather than to the language of defamation.” In my opinion, Judge Scheindlin would be more impressed with Judge Posner’s opinion than in dictum from a Mississippi judge. Judge Posner, by the way, also wrote that terms like “scab,” “traitor,” “fake” and “phony” (far more pejorative than “crackpot”) “are incapable of defaming because they are mere hyperbole….” Judge Posner added, “By publishing your views you invite public criticism and rebuttal; you enter voluntarily in one of the submarkets of ideas and opinions and consent therefore to the rough competition of the marketplace.”

So, in my opinion, Judge Scheindlin will promptly dismiss your suit. Assuming, for sake of argument, that she does not, your suit faces several insurmountable evidentiary obstacles. First, your complaint alleges that your Lifecode book, in both the 2004 and 2007 versions, was published by “Ryland Press, Inc.” My research has turned up no such publisher anywhere in the world. There is, in New York and London, a publisher called Ryland, Peters & Small, but during my recent telephone conversation with a member of their staff, I was told they did not publish your book (they specialize in cookbooks and stationery). So you would certainly be asked during discovery to identify and produce records from “Ryland Press,” including sales figures. I also talked with Terry Krohn at Axiom House, which advertises your second Lifecode book; he told me it was not published by him, that he listed it as a favor to you, and that it had no sales to date. It would be impossible for you to prove even one dollar of damages, let alone $15 million.

Finally, you and Mr. Little are subject to monetary sanctions under Rule 11 of the FRCP; I’ll let Mr. Little explain that to you, since he is presumed to know of this potential consequence of filing a meritless suit.

Let me emphasize that I am sending you my opinions as a private party; I do not represent anyone in this suit. You are free to disregard my opinions but, if I were you, I would consider them carefully and instruct Mr. Little to promptly withdraw the complaint.