The Devil in Dover
Lauri Lebo
The New Press
(http://laurilebo.com)

I had been steadily working on analysis of an experiment that I will be presenting later this month, but Sunday afternoon a line of thunderstorms blew through here, and somewhere in there the power went out. My work laptop runs out of juice quickly when running Avida, so that’s closed up. There’s only so much playing with the puppy that I can handle at a time, and somehow I feel a need to do something.

Several of my fellow bloggers at the Panda’s Thumb have been talking about journalist Lauri Lebo’s new book, “The Devil in Dover”. There’s about five who say that they are in various stages of writing reviews to be blogged here, there, or published in the mainstream media. And they all, to a man (yes, all of them are male), love it. About ten days ago, Lauri Lebo even gave me a personally inscribed copy (I contributed a photo for the front of the dust cover design and set up her personal website for the book). I hadn’t gotten around to actually reading the book, though, until the lights and power went out, reducing my options. But I have to say that the book is good enough to wish for a power outage. I have remedied that piece of ignorance with the help of a flashlight and a couple of changes of battery and can now speak to the content in the about two hours that my personal laptop has available in its battery charge.

The first thing to say is that Lauri’s book (and I do hope that I am not unjustly taking liberties in our acquaintance to say “Lauri”) is not just a journalist’s compilation of data, but rather an intensely personal book. There are several threads of personal involvement that Lauri takes up here. Perhaps the most touching is her relationship and estrangement from her father, who converted to fundamentalist Christianity several years ago and persistently searched for signs that Lauri would also be “born again” as he had been. But also there is the personal struggle with those in her profession who misconstrue journalistic “objectivity” perversely as a charge not to speak the truth when a situation indicates that a “side” is plainly in the wrong.

(Originally posted at the Austringer)

And that leads to the second thing to say about Lauri’s book here, which is that as a local reporter and acquaintance of most of the principal dramatis personae of the Dover-area Kitzmiller v. DASD dustup, Lauri delivers what will likely stand as the closest approach to getting inside the shoes of not only the plaintiffs, but several of the defendants as well. In particular, Lauri was able to relate to Bill Buckingham, infamous as the school board member that even the Thomas More Law Center (TMLC) repudiated, in a way that got beyond the blunt and confrontational style he was known for in the months leading up to the lawsuit. The TMLC betrayal led Buckingham to the brink of suicide, Lauri reports, and then to his early resignation from the Dover school board. Lauri’s descriptions of Buckingham’s frailties and foibles don’t gloss over or diminish his truly monstrous behavior, but they do lend a humanizing touch to someone otherwise known primarily or only for his unswerving intolerance of the religious views of others.

The third thing to say about Lauri’s book is that she has managed to pretty well linearize a complex storyline involving parallel actions by many players, and this is no mean task. One can have, in a few hours of reading, an excellent overview of the chronology of events going back to tension in 2002 over a student-painted mural depicting human evolution and displayed prominently in a science classroom at Dover High School, and up to the period around the filing of the decision by Judge Jones. The centerpiece of this is the condensation of the events in the courtroom during the trial itself, for which Lauri relates that she had a front-row jury-box seat. She relates here the testimony of the plaintiffs as they had to relate to the court what harm they had suffered as a result of the school district’s “intelligent design” policy. In the cases of Fred Callahan and Cyndi Sneath, these are revealed as piquant moments of eloquence and directness in the courtroom, rebutting the defense contention that the policy’s statement in the classroom was brief, modest, and without further issue.

The plaintiffs’s expert witnesses awoke interest and respect from the journalists, while the defense’s primary expert, Michael Behe, managed to turn off almost everyone present during his direct testimony. Lauri’s description of the abrupt return from boredom as Eric Rothschild cross-examined Behe is worth the price of the book, laying bare the platitudes and sound bites Behe had come to rely upon as a facade resting upon, well, nothing. And here one encounters something that Lauri exposes through the book, and that is the obliviousness of the Dover school district’s “intelligent design” advocates and their chosen defenders to how their statements and actions were taken by others. In Behe’s case, Behe left the courtroom apparently well-convinced of having given a sterling performance, though later Lauri filed her story and was remonstrated with by her editor to lead with something positive for the defense’s case that day. “No, they did nothing,” she said, “Rothschild eviscerated them.”

The courtroom provided the denouement for the tragi-comic story of the principal “intelligent design” advocates on the school board who chose to lie rather than expose their policy to a possible temporary restraining order. The depositions of those people taken in early January, 2005 provided clear evidence that Bill Buckingham and Alan Bonsell purposely concealed information pertaining to the purchase of 60 copies of the “intelligent design” textbook, “Of Pandas and People”. Steven Harvey provided the courtroom confrontation between established fact and the defense witnesses’ impossible prevarications. Lauri notes again the apparent obliviousness of the witnesses to their peril, though Alan Bonsell apparently came to some realization there in the witness stand under grilling from Judge Jones himself. I think Sheila Harkins dodged a bullet here, as Lauri’s description of the school board president’s testimony again documents that oblivious trait, but mercifully does not convey the full bizarre spectacle that Harkins conveyed as a witness. I happened to be there, am not that merciful, and was dumbfounded that any attorney could have so ill-prepared a witness for giving testimony. Harkins chewed gum throughout her time in the stand, fidgeted nearly constantly, and sometimes answered questions while holding her face in one or both hands.

The lawyers of the Thomas More Law Center did not go unobserved. Lauri provides descriptions of their part in the affair from fomenting the Dover school board’s participation in a “revolution against evolution” through their sometimes lackluster courtroom performance. In particular, Richard Thompson is revealed as a man on a mission to whom all others are secondary considerations, including the people that his law firm agreed to “shield” from legal challenge. Thompson’s sole concern, as related in the book, was putting a court record together to take to the Supreme Court. Given this view, it is perhaps understandable that TMLC did not take the same sort of care in preparing their witnesses that the plaintiffs’ attorneys did. The witnesses weren’t the real issue for Thompson, so poor posture and failure to enunciate were apparently simply not on the defense legal team radar as things to avoid. That’s on the minor side; on the major side is what role, if any, did TMLC have in the concerted effort by the school board advocates for “intelligent design” to deny the plain truth that they had come to their position by first looking to incorporate creationism in the science classroom. Lauri’s conclusion is unfortunately true, that we may never know what went on there, but the outcome was to propel Dover into the national spotlight.

A fourth thing to say about Lauri’s book is that Lauri is a masterful wordsmith and constantly comes up with descriptive gems. Her verbal acumen coupled with her comprehensive knowledge of the local milieu gives us an account that is a pleasure to delve into.

My mother taught me to love the smell of puppies’ milk breath, and the feel of their bellies taut and round like hard-boiled eggs. She taught me to stretch out, my face pressed in the grass, the laundry snapping above me on the clothesline, to indulge the drowsy feeling of sunshine on the back of my head.

My father pointed to the sky at night and taught me to dream of infinity. On hot summer evenings, he wrestled with his children, like kittens, in the grass until long after teh sun went down. Then we lay on our backs in the grass and watched the stars. I’d shine a flashlight into the sky, gazing at the beam of light disappearing into the dark. Millions and millions of years from now that light will reach those stars, my father told me. I’d try to follow the beam with my eyes and ponder this until I grew dizzy. 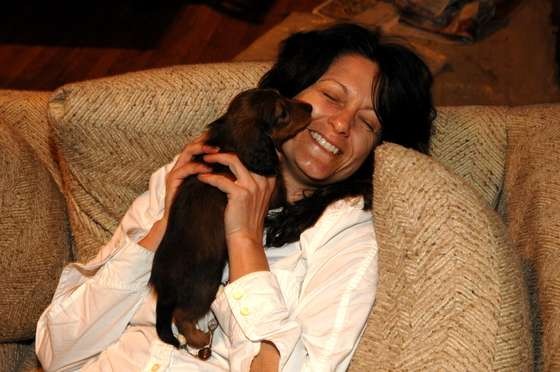 Are there errors in the book? Of course, any book length project will collect its share of those. Most of these fall into the category of quibbles, as in Lauri referring to the National Center for Science Education’s “Project Steve” as “Project Steve Steve”. The other class of error is one that follows from the fact that the book is short. There simply is not enough space here to recount the involvement of all the people who contributed in some way to the remarkable events in Dover and Harrisburg in 2004 and 2005, nor to fully document those who are mentioned in the book. Lauri’s choices here play to her strengths in having the local background, and this combination of focus and brevity brings a cohesion to the book that balances the cost of excluding various actors from a chance at the stage. Those would include defense experts Scott Minnich and Steve Fuller, whose testimony goes unremarked in the book [though, again, this might be a further act of mercy on Lauri’s part], or the various disappearing defense witnesses, who either get brief mentions in other contexts or who go wholly without notice here.

But the book was not intended to be an encyclopedia entry, and it brings home the human experience of having to confront religious intolerance when one cares deeply about the intolerant people. It is an easy path to demonize or villainize those who chose intolerance as their approach, and Lauri avoids this simplification. The book begins and ends with Lauri’s prickly and ultimately unresolved relationship with her father, who died days after the decision in the case came down. The bond of love between the two is manifest, and in some way prepares us to see that even for the rest of the folks pushing things they shouldn’t, that they have a reason in their unreason to take the course they do. Conceding to their demands for intolerance is not an option, and Lauri celebrates the resolve of those who challenged the Dover school board’s “breathtaking inanity” while respecting the dignity of those who partook in the inanity. It’s a deeply moving account, and if you haven’t yet read it, it is time to put it on your list, buy it for a friend or loved one, and otherwise pass along the word that here is a read that is both challenging and rewarding.

Do it now. Don’t wait, like me, for a power outage.