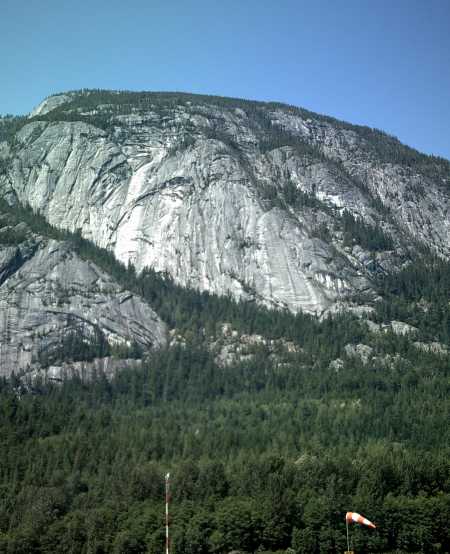 I am currently in British Columbia, Canada, participating in the Batholiths Onland experiment.

Nominally, this large group effort involving over 50 scientists and grad students is for “a seismic refraction and wide-angle reflection survey across the Coast Mountains batholith of British Columbia, Canada.”

This rather terse description does not really do justice to the project, which has the purpose of discovering why continental mountain ranges are often made of granite instead of basalt.

Relevance to the Panda’s Thumb? (1) Real science involves real work; when is the last time you saw a creationist actually measure something, or use a shovel? (2) Real scientists think the earth is billions of years old. You just can’t scientifically reconcile these batholiths with a 10,000-year old earth without being more than a little schizophrenic.

This phase of Batholiths is for performing seismic imaging of the crust and mantle below the Canadian Rocky mountains in British Columbia, one of the largest collection of batholiths (from the Greek bathos, depth + lithos, rock, a large mass of intrusive igneous rock believed to have solidified deep within the earth) in the world. My part of this experiment is as one of six IRIS/PASSCAL scientists assisting with the seismic ranging for the project. This involves deploying thousands of seismic sensors and recorders across British Columbia, and recording responses to several man-made detonations. These responses can then be analyzed to yield, first, seismic velocity profiles; these are then related these to variables such as density or temperature, which in turn are related to chemical composition of the crust and mantle. Many other sources of data are also used, including gravitometric measurements, geochronology, broadband recordings of natural earthquake tremors, and more.

During my discussions with John Hole, one of the project’s Principal Investigators (PI’s) from Virginia Tech (but a native Canadian, and glad to be working there again), I learned that that basic goal of the project is to locate the “missing pyroxenes.” In brief, as the mantle is distilled chemically below the crust, the result is primarily gabbro, a mafic rock quite similar to basalt in chemical composition. Further distillation of gabbro can remove the pyroxene components, leaving what is basically granite which we see in these huge, beautiful batholiths.

But, where do the pyroxenes go? Are they hiding between the crust and the mantle? Are they melted back into the mantle? Why are mountain ranges not always formed from huge basaltic lava flows? Why is there so much granite in continents?

This project will be ongoing for several weeks in July 2009. For a photographic tour showing what it’s like to work on a “Big Science” project, log in the Batholiths entry to the NMSkeptic blog. Comments may be left here (MT4 willing) or there, but no where in between.