Since the “Hobbit” fossil LB1 was discovered on the Indonesian island of Flores in 2004, debate has raged as to whether it is a new species of hominid (Homo floresiensis), or a pathological modern human specimen. And, if it is a new species, where it should fit in the human family tree - a near-human relative, a dwarf Homo erectus, or something else?

The November issue of the Journal of Human Evolution was devoted to Homo floresiensis, with a number of papers on various aspects of its anatomy and environment.

Argue et al. have performed the first cladistic study of LB1. Cladistics uses comparisons of characteristics of specimens to try and determine their evolutionary relationships. Their results showed that LB1 most likely split from the rest of the genus Homo either after H. rudolfensis but before H. habilis, or after H. habilis. It therefore apparently evolved from an early Homo species, sometime between about 1.5 and 1.9 million years ago. They also tested whether LB1 could have shared a unique common ancestor with either Homo erectus or Homo sapiens, but both of these hypotheses were strongly rejected. Their full conclusion was:

Based on rigorous cladistic analyses, we propose that H. floresiensis evolved in the Late Pliocene or Early Pleistocene. The first of our two equally parsimonious trees suggests that H. floresiensis branched after H. rudolfensis (represented by KNM-ER 1470) but prior to the divergence of H. habilis (represented by KNM-ER 1813 and OH 24). Alternatively, our results are equally supportive of H. floresiensis branching after the emergence of H. habilis. Our results sustain H. floresiensis as a new species (Brown et al., 2004; Morwood et al., 2005) and favor the hypothesis that H. floresiensis descended from an early species of Homo (Falk et al., 2005; Argue et al., 2006; Larson et al., 2007; Tocheri et al., 2007). We find no evidence of close phylogenetic relations to H. sapiens, and reject the idea that the Liang Bua remains represent a pathological modern human. Importantly, we also are unable to link H. floresiensis phylogenetically to H. erectus, rejecting the hypothesis that the small enigmatic bones resulted from insular dwarfing of H. erectus. It is surely time we accepted the reality of H. floresiensis as a species and seek answers to the questions that this species poses, not least of which is: who were its ancestors?”

From the abstract of the Jungers et al. paper “Descriptions of the lower limb skeleton of Homo floresiensis”:

The lower limb skeleton exhibits a uniquely mosaic pattern, with many primitive-like morphologies; we have been unable to find this combination of ancient and derived (more human-like) features in either healthy or pathological modern humans, regardless of body size.

From the abstract of the Larson et al. paper “Descriptions of the upper limb skeleton of Homo floresiensis”:

The upper limb presents a unique mosaic of derived (human-like) and primitive morphologies, the combination of which is never found in either healthy or pathological modern humans.

Another recent paper about the hobbit by Jungers and Baab appeared in the statistical journal Significance, and did a number of statistical comparisons of LB1.

A multivariate analysis shows LB1’s brain shape has no resemblance to the shape of modern human microcephalics; it is most similar in shape to fossil skulls of early Homo, especially to the Dmanisi skull D2700. The lower jaw has no chin but is instead strengthened by internal bone, similar to australopithecines, and the anatomy of some of the teeth are “strikingly primitive”.

This extremely high ratio (around 87%) is never found in modern humans; this index is closely matched, however, in the partial skeleton of “Lucy”, a famous fossil of Australopithecus afarensis from Ethiopia dated to more than 3 million years ago!

To drive home the message, look at the scatter plots comparing LB1 to human pygmy populations: 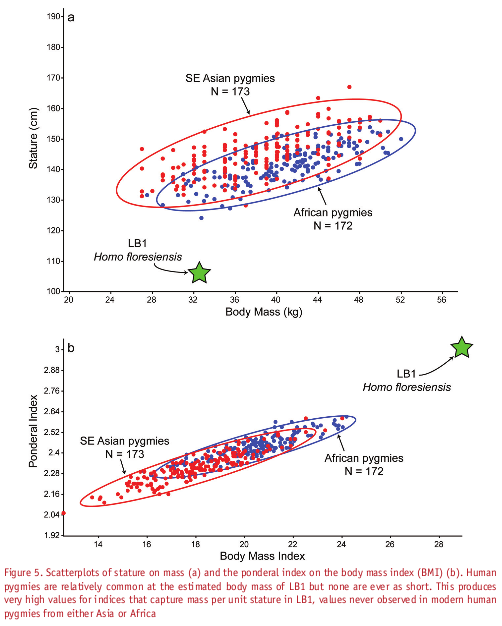 In short, the idea that the hobbit is a pathological modern human looks more and more improbable. The differences between the hobbit and modern humans just keep coming, and no conceivable pathology could cause a population to have so many differences which, just coincidentally, happen to closely resemble those of primitive Homo nearly two million years ago.