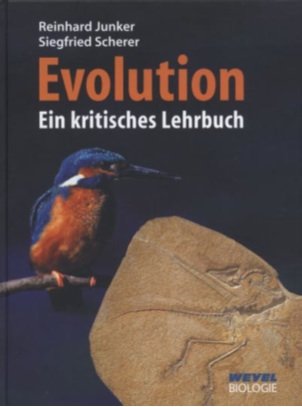 I just came across what is apparently a major online revision to the German creationist textbook Evolution - ein kritisches Lehrbuch, by Reinhard Junker and Siegfried Scherer. The section is section 9.4. There is an HTML summary (original German, google translation) and a 32-page PDF is here (apparently too long for google to translate).

Sadly, while I took German in high school, most of what I remember involves beer-drinking songs, which doesn’t help me out much here. Clearly Matzke (2003/6) and Pallen & Matzke (2006) and perhaps other commentary on flagellum evolution got deep under their skin – most of the chapter seems to be taken up with attempting to refute the evolutionary model for the origin of the flagellum! Regardless, I can tell there are a few issues – they cite the 2003 critiques of the flagellum evolution model by the pseudonymous “Mike Gene”, without noting that several later scientific developments caused Mike Gene to substantially improve his opinion about even the most radical part of Matzke 2003, which was the idea that a good chunk of the flagellum was homologous to the F1Fo-ATPase and relatives. (The original seems to be lost to the internet ghosts, but Ed Brayton blogged it, see: “Mike Gene Admits Matzke was Right”)

Anyway, if anyone knows of a source that can translate PDFs, or if there are any German speakers up for summarizing their main points, it would be interesting to hear if they’ve come up with anything new. I mean, there’s 32 whole pages, so maybe they will actually acknowledge that Luskin & numerous DI sources were wildly wrong about the number of required, flagellum-unique proteins in the flagellum. And actually, it does look kind of like Junker & Scherer are advancing some argument that relies on the idea that the flagellum parts are not unique, but instead were designed to serve multiple independent functions (see Figure 4). How conveniently like evolutionary cooption!