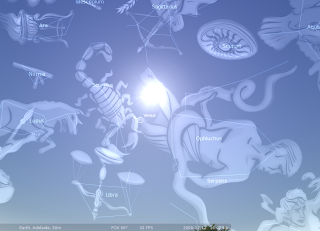 The Sun in the constellation Ophiuchus on December 12, contary to coomets of some astrologers.

A recent article by astronomer Parke Kunkle has had the twitterverse and astrologers in an uproar by pointing out that Sun no longer enters the constellations associated with the zodiac due to precession of the equinoxes.

Now, readers of the Panda’s Thumb might wonder why a kerfuffle about a pseudoscience like astrology warrants attention on a blog devoted to evolution. However, there is a parallel between how astrologers respond to criticism and how anti-evolutionists respond to criticism. So you might find it interesting (oh, and yes, astrology is rubbish).

Tropical Astrologers are boasting that Kunkle is wrong, and their system is better than that of Sidereal Astrologers, because their constellations are defined by the Vernal Equinox, and yar-boo-sucks to those silly astronomers (does this sound familiar).

“This is an old hoax. Historically, Ophiuchus has never been listed as a constellation in the sidereal zodiac. It is a constellation out there, but it’s off the ecliptic (that is, it’s not along the path of the Sun through the sky). I’ve read that Ptolemy mentions it in his literature as an off-zodiac constellation, meaning that the Sun never travels through it….”

Sorry mate, the Sun does travel through it (and has done so since Ptolemy described it back around 130 AD, and probably even earlier based on the Farnese Atlas see the image above), as does the Moon and planets, in fact the Sun spends more time in Ophiuchus than it does in Scorpius. It’s good that astrologers are so familiar with the sky they get their predictions from.

What’s more, several astrologers have suggested that Ophiuchus should be incorporated into the zodiac (see here, here and here). So I wouldn’t call the proposal for Ophiuchus to be a Zodiacal constellation a “hoax”, Mr. Astrologer.

So, basically Tropical Astrologers are complaining that, err, scientists are accurately describing astrology at the same time demonstrating ignorance of fundamental aspects of the sky (and their own discipline). Again, does that sound familiar?