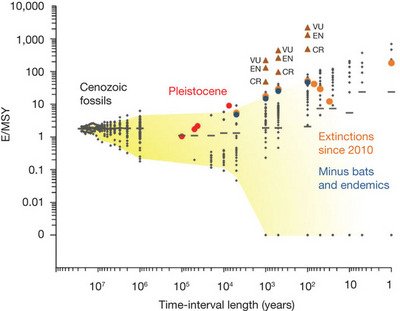 This isn’t exactly about creationism/evolution, but it’s still pretty cool. And I will find a way to tie it in, since I haven’t blogged on PT in, I think, months.

Contrary to what creationists believe, evolutionary biologists don’t sit around in biology departments plotting to overthrow God and morality. We spend our time doing things like statistics and programming and specimen preparation and experimental manipulation and DNA sequencing and field observation, and then give and hear talks and discussions about this research. The main thing we are interested in is not “proving evolution”, it is discovering cool facts and devising hypotheses to explain them, and then devising tests of those hypotheses (typically, statistical tests, something which creationists almost always ignore). In short, it’s like any other science.

This paper is a case in point:

Palaeontologists characterize mass extinctions as times when the Earth loses more than three-quarters of its species in a geologically short interval, as has happened only five times in the past 540 million years or so. Biologists now suggest that a sixth mass extinction may be under way, given the known species losses over the past few centuries and millennia. Here we review how differences between fossil and modern data and the addition of recently available palaeontological information influence our understanding of the current extinction crisis. Our results confirm that current extinction rates are higher than would be expected from the fossil record, highlighting the need for effective conservation measures.

It emerged from a seminar course on mass extinctions, taught by Berkeley paleontologist Tony Barnosky. The graduate students included zoologists, anthropologists, computer/modeling types (that’s me), and paleontologists. While reviewing the literature on mass extinction, we got to discussing what it means to say that we are currently “in the Sixth Mass Extinction”. There are different ways to measure extinctions, e.g. by absolute magnitude (mass extinctions have typically been defined as situations where 75% of species go extinct) or by rates of extinction far above the typical background rate. The difficulty with comparing mass extinctions in the paleontological record to the current extinction crisis is that the paleontological record has very coarse resolution compared to human time scales. You are doing very well in paleontology if you can date an extinction event to +/-300,000 years – but this uncertainty in dating an event is much larger than all of recorded human history! In addition, for various reasons it is common in geology, paleontology, and evolution, that the shorter the period of time over which you measure something, the more variability in rate you tend to see, and this variability gets smoothed out when you average over longer time intervals. Thus, extinction events in the fossil record can be “smoothed” by the coarse-resolution data than they may have been in real life. Similarly, the current rate of extinction might, hypothetically, fall within the range of extinction rates that happen in “regular” background extinction, when background extinction is measured at short time intervals.

Since it is pretty important for us to know whether or not our current extinction crisis compares to mass extinction events, we proposed some ways of turning the “apples and oranges” comparison of the fossil and modern data into something more like an “apples and apples” comparison. Basically this can be attempted by looking at both the fossil record and the modern record at a variety of time-resolutions. We can also examine what the future might look like under different scenarios: e.g. what is the extinction rate if all currently endangered species were to go extinct; what is it if all endangered + threatened species go extinct, etc., and how long does it take us to get to a mass extinction under each of these scenarios? Basically our conclusion was that even under the most conservative assumptions, we are still at an extinction rate that is very elevated compared to the fossil background extinction rate. Depending on the scenario, we reach a 75% “mass extinction” (for certain well-studied groups) within a few hundred to a few thousand years, if, as people say, “current rates continue.” This is a geological eyeblink.

Obviously, given the study we made of how extinction rates can be variable, we are not so naive as to predict that a mass extinction will come for sure in a few hundred or a few thousand years. This would be fatalistic and unscientific. Rather, what we say is that we are currently on that path. Taking a different course will require that humans recognize the problem and make decisions to avoid it.

Anyway: this is one small example of the kind of evolution-related research that happens in one department on one campus. It is one of hundreds of evolution articles published by Berkeley researchers each year, and one of tens or hundreds of thousands of such articles published each year around the world. It’s routine. It may seem strange to creationists and other wildly amateur commentators on the field of evolutionary biology, but this is the kind of thing that is going on every day of every week in biology departments. It’s about the furthest possible thing from being some kind of conspiracy or plot against creationism, God, the Bible, morality, etc. It’s just us doing our day jobs, just like all of the other scientists on campus.