Those following the controversy about the ID/creationist volume that is being further peer-reviewed by Springer should make sure to check out the piece by reporter Kaustuv Basu at Inside Higher Ed. (See previously: PT post #1, PT post #2.)

Here, we get the first reactions from the creationists involved with the project:

This week’s furor broke along predictable lines, with the editors of the book criticizing the attitude of the supporters of evolution. John Sanford, one of five editors of the book and a courtesy associate professor at Cornell University’s Department of Horticulture, said in an e-mail that he was amazed that anyone could think that the “Darwin Dissidents” were trying to take over academe.

There is apparently a lot of confusion about what “free speech” means in the creationist community. Just this week I experienced this with Casey Luskin. I recently emailed him to express my worry that he might have trouble sleeping at night, after he abandoned his oft-stated claims to be environmentalist and pro-science when he wrote this post: “A Friendly Letter to the Heartland Institute and Other Advocates of Free Speech on Global Warming”. The post gave all kinds of love to the global-warming deniers, and didn’t bother to raise a single finger of criticism for the deniers’ numerous shenanigans, even though Luskin agrees with the mainstream that global warming is happening and humans are causing it. Luskin replied that he was just defending freedom of speech, to which I replied:

I think you should repeat after me:

If the government imprisons you or bans your book, that’s a violation of free speech. The government, schools, museums, publishers, etc. making decisions about what is good science and what is not, and deciding that your view is not and is unworthy of promotion with their dime and their time, is *not* a violation of free speech. It’s a simple *requirement* of these institutions successfully functioning in the modern age.

It’s very simple, I’m surprised a lawyer like you doesn’t know this.

And as for Sanford’s talk about “tolerance and open dialog”, this can’t be the only guiding value, or else we’d have to demand that peer-reviewed science publishers publish Bigfoot, anti-vaxers, HIV deniers, UFOology, and a hundred other forms of crankery. The *whole point* of peer-review is *to exercise critical judgment*. This is entirely meaningless if any criticism or rejection is taken to be censorship. Everyone involved here has freedom of speech – the creationists, the publisher (which decides what and what not to publish, every day, all the time), the reporters, the other scientists who edit and publish for Springer and who have a state in its credibility, us bloggers commenting on the topic, etc. Freedom of speech does not belong only to the creationists.

Speaking of freedom of speech, perhaps there wasn’t room in Basu’s short piece, but describing Sanford as “a courtesy associate professor at Cornell University’s Department of Horticulture” doesn’t quite cover everything one might say. Here is some more relevant information:

Source: “Down - Not Up.” Lecture by John Sanford at Loma Linda University. Date uncertain, sometime between June 2011 and the upload date, Feb 20, 2012. Loma Linda, if you didn’t know, is a Seventh-Day Adventist institution, and the Seventh-Day Adventists are one of the theological strongholds of young-earth creationism in the U.S., although this effect may decay with distance from Loma Linda, as Wes and I once discovered. 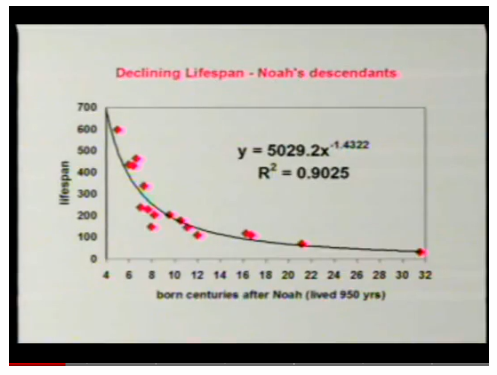 About this graph, Sanford says:

Yep, there’s some really critical scientific thinking on display there.

The conclusion of Basu’s piece contains a response from John West at the DI:

John West, associate director at the Center for Science and Culture at the Discovery Institute, an organization that advocates for intelligent design, said the critics had not read the book and were bigots. “In the academic world, it is not considered a mark of scholarship to attack books you haven’t read,” he said, calling Matzke, the blog-poster, a hypocrite. “Intelligent design scientists are criticized for not publishing and then you denounce them for doing just that. It is damned if you do, damned if you don’t.”

I’ll just quote what I said to the reporter who inquired: “And obviously I haven’t read the book. But I have read virtually every ID publication ever, and these guys don’t change their tune very much.” One is not required to disregard prior knowledge when forming an opinion. I am a Bayesian, after all.

If ID folks were seriously interested in gaining honest credibility in science, they would have to change their approach in many ways. A non-exhaustive list would include:

If your arguments actually had merit, the above approach would work, eventually. The honesty would be refreshing and would attract more attention from serious experts than the currently standard devious tactics, which just make you look like just another group of un-serious cranks. The route above is the route taken by all of the actual revolutionary scientific ideas which have succeeded. They start with one or a few people, they make their arguments, acknowledging the weight of the prior paradigm, and encouraging critical review from relevant experts. They focus only on trying to convince their scientific peers. Only long after they succeed do their views get into the schools.