It has been announced that Robert Sokal died on April 9. I wrote a brief obituary here last autumn for his co-worker Peter Sneath. Together they pioneered the use of clustering algorithms in taxonomy, and argued for the adoption of phenetic methods based on clustering there. While they were ultimately unsuccessful in this, they became founding fathers of work on mathematical clustering, and their book Principles of Numerical Taxonomy was widely-noticed and greatly stimulated the development of phylogeny algorithms. A paper by Michener and Sokal (1957) is, as far as I can tell, the first one publishing a numerical phylogeny. His publication of the 1965 paper by Camin and Sokal in Evolution, and a visit he made to the University of Chicago that year, inspired me to start working on phylogeny algorithms. 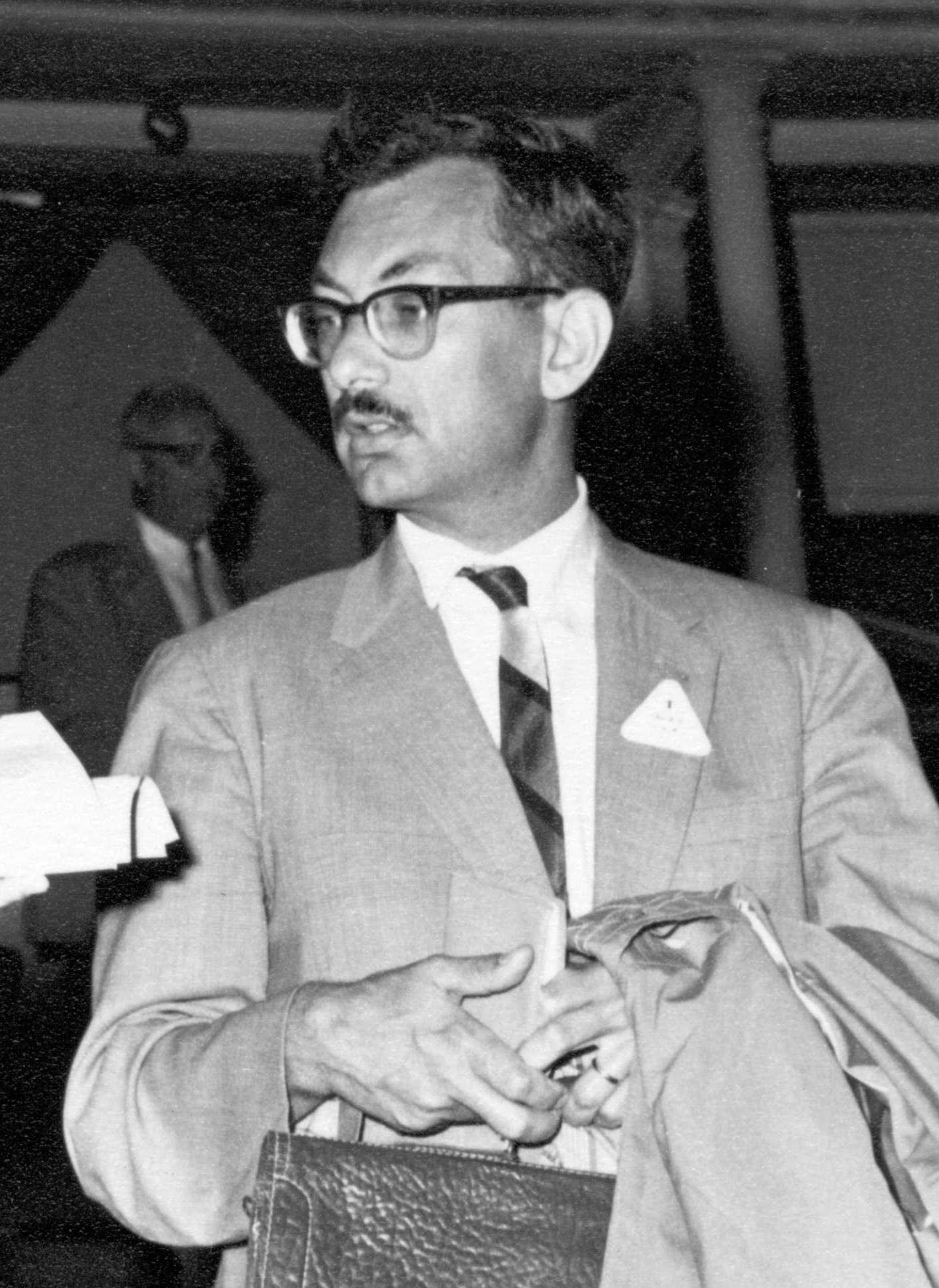 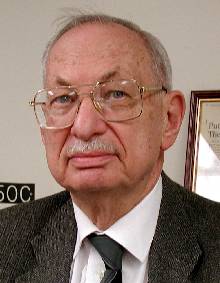 |Robert Sokal in 1964 at the International
Entomological Congress in London|Bob Sokal, more recently

Bob’s Stony Brook colleague Michael Bell has written a fine obituary, which I reprint below with his permission.

We are sad to report that Distinguished Professor Emeritus Robert R. Sokal passed away in Stony Brook on Monday, April 9, 2012 at the age of 86. Prof. Sokal was a founding member of the Department of Ecology and Evolution at Stony Brook University, co-founder of the methodological school of Numerical Taxonomy, and the principal investigator for major research programs in the spatial variation of insects and humans and the evolutionary response to selection in insects. He supervised the training of numerous Ph.D. students and taught biometry to a much larger number. He was a member of the National Academy of Sciences of the USA and received many other honors during his remarkable career. We in the Department of Ecology and Evolution at Stony Brook will miss his insights, support, and friendship.

Prof. Sokal was born into a middle class Jewish family on January 13, 1926 in Vienna, Austria, the only child of Klara and Siegfried Sokal. He fled the looming Nazi menace with his family in 1938 to Shanghai, China, which became the refuge for tens of thousands of European Jews during World War II. Robert attended secondary school and college in Shanghai, earning his B.S. degree in Biology from St. John’s University in 1947. There he also met a young Chinese student, Julie Chenchu Yang, who became his wife and lifelong love. A book entitled Letzte Zuflucht Schanghai (Final Refuge Shanghai) by Stefan Schomann (2008) in German and translated into Chinese chronicled Robert’s flight from Vienna, his family’s refuge in Shanghai, and the start of his life with Julie, before he came to the United States for his graduate education.

Prof. Sokal received his graduate training at the University of Chicago, where he earned his Ph.D. in Zoology in 1952 under the direction of entomologist Alfred E. Emerson and was strongly influenced by Sewall Wright. He joined the Entomology Department at the University of Kansas in 1951 as an instructor, and rose rapidly through the academic ranks to Professor of Statistical Biology in 1961. He was recruited by Lawrence B. Slobodkin to the fledgling Department of Ecology and Evolution at the State University of New York at Stony Brook in 1968, where he spent the remainder of his career.

Prof. Sokal’s scientific publications span a broad range of subjects and seven decades. He published major papers in ecology, evolution, anthropology, geography, statistics, and of course systematics. His papers appeared in Science, Nature, PNAS USA, and many of the best specialty journals in ecology, evolution, systematics, anthropology, and statistics. He is probably best known to evolutionary biologists and ecologists for his Biometry textbook with F. James Rohlf, the fourth edition of which he completed less than a year before his death. A recent search of Google Scholar indicated that the third edition of Biometry had been cited 19,851 times. Prof. Sokal is also well known as the co-founder of Numerical Taxonomy with Peter H. A. Sneath in 1963. This work promoted digital methods for classification and was controversial both because it advocated abandonment of traditional evolutionary systematics and led to the debate between the advocates of phenetic and cladistic methods. Regardless, it is undeniable that Prof. Sokal pioneered the use of rigorous, objective statistical methods and the employment of computers in systematics. Prof. Sokal started his career with dissertation research on patterns of geographical variation in Pemphigus aphids. Later, he initiated research on the evolutionary response to selection in laboratory populations of Tribolium beetles and house flies. His last major empirical project, which he pursued for more than two decades, focused on analysis of patterns of spatial variation in human populations for a variety of traits and the development of new methods for these analyses. Prof. Sokal published 12 books (5 translated) and 206 articles, and his publications have been cited tens of thousands of times.

Prof. Sokal came to Stony Brook University as a Professor in 1968. He was named Leading Professor in 1972 and Distinguished Professor in 1991. He retired in 1995 and became a very active Distinguished Professor Emeritus. He served as the Chair and Graduate Program Director of the Department of Ecology and Evolution at Stony Brook University from 1980 to 1983 and as Vice Provost for Research and Graduate Studies from 1981 to 82. He remained very active in scientific research, the Department of Ecology and Evolution, university affairs, and the National Academy of Sciences, even attending departmental colloquia until the last year of his life, when his declining health precluded it.

Prof. Sokal also served in many other prestigious capacities, including President of the Society for the Study of Evolution, the American Society of Naturalists, the Classification Society, and the International Federation of Classification Societies, the last of which he helped found. He was an associate editor of Evolution (1965-68) and editor of The American Naturalist (1969-1974). He received many high honors, including both Fulbright and Guggenheim awards, the Charles R. Darwin Award for Lifetime Achievement of the American Association of Physical Anthropologists, and many others. He was a Fellow of the American Academy of Arts and Sciences and The American Association for the Advancement of Science, and a member of the National Academy of Sciences of the USA.

Robert R. Sokal is survived by his wife of 64 years, Julie Sokal, his children David Sokal and Hannah Sokal-Holmes, and four grandchildren. He will be greatly missed by his family, friends, and colleagues.

Bob’s life story was, as you can see, very dramatic. He was a fluent speaker of the Shanghai Chinese dialect, as well as of English and German.

I will miss Bob, who I interacted with over many years, particularly at the Numerical Taxonomy conferences that he ran annually for many years. He was always passionate about the wars in systematics, and would always insist on firmly rebutting criticisms of phenetic approaches to taxonomy. I vividly remember one time describing “pattern cladistics” to him and saying “Isn’t that a phenetic position?” and him raising his eyebrows and saying in his Henry-Kissinger-like accent “as far as I can see it is”.