There are 23 pairs of chromosomes in the human genome. If you counted the number of positions - A’s, T’s, G’s, and C’s - you would have approximately three billion positions across those 23 chromosomes. And because each chromosome is part of a pair, you can multiply that number by two, for a total of six billion places where a mutation can happen. Assuming there are not very many lethal positions, is it really possible to have a mutation at every site in at least one living human? 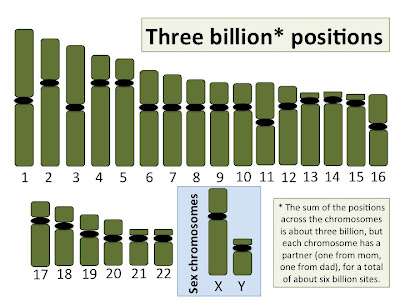 In fact, we expect that across all humans, there are over 100 mutations at every single position in the human genome. And, here is the math to prove it:

The average mutation rate in the human genome is 1.2 x10^-8 mutations per site per generation. This is pretty small, so in each person, we only expect to observe a handful of new mutations relative to their parents. But, that handful of mutations adds up when you think of how many people are on the earth.

If we let the birth of every person alive represent a single generation event, then we can estimate the average number of new mutations at each site across all 7.16 billion people by multiplying the mutation rate per generation, by the number of generations:

This says that if we could look at the genome of all 7 billion people, on average, we expect to observe 86 new mutations at each of the six billion individual positions across the genome. But we usually don’t talk about each copy of a chromosome individually (the one you got from your mother and the one you got from your father), we just talk about a single chromosome, like chromosome 1. That is, we think about the genome as folded in half (that three billion number I first mentioned).

So, the folded number (thinking about the number of differences across the three billion sites), suggests that there are about 172 mutations at each site of every chromosome across the whole human population. 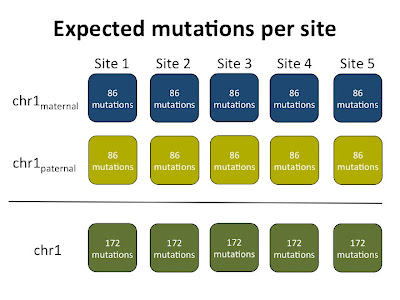 That sounds like a lot of mutations, and it really is, but think about all of the people on the earth!

*A mutation that results in death would not be tolerated, so we would not expect to observe mutations at a select set of very important sites. BUT, a mutation that is harmful in one tissue (like the brain) may not have any effect in a different tissue (say, the skin). That is a story for another day.