Jean Baptiste Pierre Antoine de Monet, Chevalier de Lamarck, would have been 269 today (August 1), were it not for his untimely death at 85. But he did accomplish a few things – he was one of the greatest pioneers of invertebrate biology (and he coined the words “invertebrate” and “biology”). And he put forward one of the very earliest theories of evolution, one that had proposed mechanisms. A major mechanism he proposed, to explain adaptation in place of natural selection, was that effects of use and disuse of organs would be passed on to the next generation by inheritance of acquired characters. Although that inheritance has come to be called “Lamarckian inheritance”, he did not invent it – it was commonly known to be true in those days. 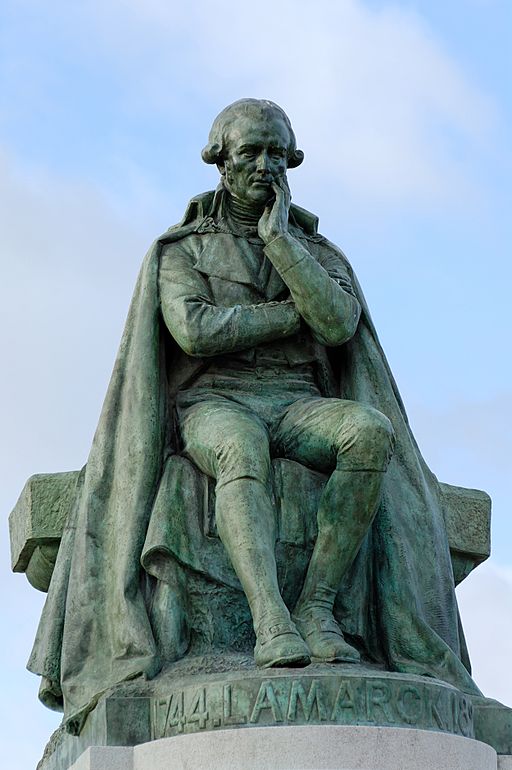 He was wrong about inheritance, but he got another important fact right …

He argued that humans are most closely related to “the orang of Angola (Simia troglodytes Lin.)” which can easily be recognized as referring to the chimpanzee, or perhaps the bonobo.

Which has to be one of the better guesses he made. Much of Lamarck’s theory sounds impossibly mystical to us today, with mysterious complexifying forces. But science of the era (around 1800) often sounds that way today, and we have to remember that scientists felt that all these mysterious tendencies would be documented by science and made part of the body of knowledge.

So let us raise a glass of excellent Picardy calvados to Lamarck. the greatest evolutionary biologist until Darwin, born on August 1, 1744.