There were more than two.
One of the misleading aspects of the “Adam and Eve” analogy, is the implication that there were only two humans alive at that time. In the video below I explain what the mtDNA is, how it can be used to trace back to find a common mtDNA ancestor, and why this genetic female was not alone. The same logic applies to the Y chromosome ancestor. Scientists estimate there were approximately 5,000 genetic females and 5,000 genetic males in the ancestral population of anatomically modern humans.

Talking with people and making this video brought up a couple other important points that are difficult to summarize in a sentence, so I’ll expand upon later:

2. A lower bound, not a point estimate.
Tracing back to the common ancestral mtDNA or the common ancestral Y chromosome does not tell us when anatomically modern humans arose. We can estimate the TMRCA, or the _T_ime to the _M_ost _R_ecent _C_ommon Ancestor, but this mtDNA surely existed much further back in time. 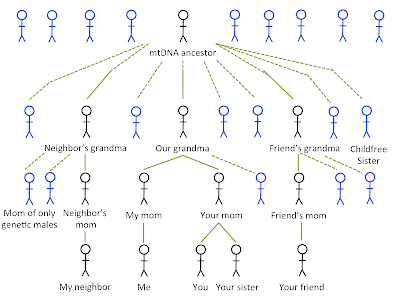 If you didn’t watch the movie, I’ll remind you that in this example, you and your sister are my genetic cousins, and our moms are sisters. In the above example you can see how we can trace all modern mtDNA back to a common mtDNA ancestor (the dotted lines indicate more than one connection is not shown).

Now imagine that a horrible disaster killed off everyone except for our family: 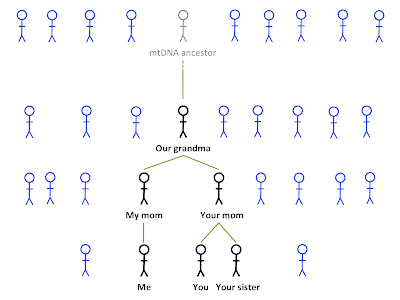 Then, the Most Recent Common Ancestor of all mtDNA really is just our grandma. The previous mtDNA ancestor still existed, but she is no longer the MOST recent.

There is so much to talk about here! My list keeps getting longer.