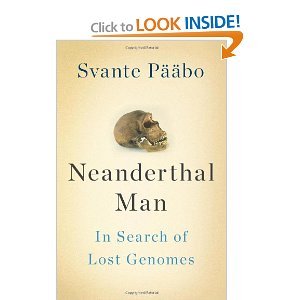 I haven’t yet read the book, although I’m sure it’s great, based on talks I have seen by Pääbo. However, there is one passage that PT readers may find particularly interesting:

There were many others who were interested in the Neanderthal genome – perhaps most surprisingly, some fundamentalist Christians in the United States. A few months after our paper appeared, I met Nicholas J. Matzke, a doctoral candidate at the Center for Theoretical Evolutionary Genomics at UC Berkeley. Unbeknownst to me and the other authors, our paper had apparently caused quite a flurry of discussion in the creationist community. Nick explained to me that creationists come in two varieties. First, there are “young-earth creationists,” who believe that the earth, the heavens, and all life were created by direct acts of God sometime between 5,700 and 10,000 years ago. They tend to consider Neanderthals as “fully human,” sometimes saying they were another, now extinct “race” that was scattered after the fall of the Tower of Babel. As a consequence, young-earth creationists had no problem with our finding that Neanderthals and modern humans had mixed. Then there are “old-earth creationists,” who accept that the earth is old but reject evolution by natural, nondivine means. One major old-earth ministry is “Reasons to Believe,” headed by a Hugh Ross. He believes that modern humans were specially created around 50,000 years ago and that Neanderthals weren’t humans, but animals. Ross and other old-earth creationists didn’t like the finding that Neanderthals and modern humans had mixed. Nick sent me a transcript from a radio show in which he [meaning Hugh Ross] commented on our work, saying interbreeding was predictable “because the story of Genesis is early humanity getting into exceptionally wicked behavior practices,” and that God may have had to “forcibly scatter humanity over the face of the Earth” to stop this kind of interbreeding, which he compared to “animal bestiality.”

Clearly our paper was reaching a broader audience than we had ever imagined.

For readers who don’t remember this episode, the blog post of YEC Todd Wood provides a good overview of the OEC vs. YEC split on the Neanderthal issue:

Below, for posterity and future researchers, is the quote from Hugh Ross’s radio show. I transcribed this in 2010, so I don’t know if the links still work, but those were the original source.

The voices are my best guess:

Here’s my transcript of the key bit of the Reasons to Believe radio show.

HR: And from a Biblical perspective, you’d actually expect there to be some interbreeding evidence, because the story of Genesis is early humanity getting into exceptionally wicked behavior practices. This evidence indeed is indicative of interbreeding, it would be at the time before the great human migrations that are described in Genesis 10. And notice in Genesis 11, verses 1-9, we have God intervening to forcibly scatter humanity over the face of the Earth. And perhaps one reason God may have done that, is because this kind of interbreeding was going on, and he wanted to put a stop to it, and forcibly scattered humanity at that point. But we have plenty of evidence in Genesis 6 that early humans, just before the Flood and right after the Flood, were exceptionally wicked, and therefore this kind of behavior was not at all unexpected.

And just to be bluntly honest, animal beastiality goes on even today. And so, again, as the researchers pointed out, they’re shocked that the level is so low as it is, their expectation is that it would have been higher, given the way these animals behave and the way humans behave.

Of course, some have point out, you know, the Neanderthals were a lot stronger than us. And so the idea that a powerful male Neanderthal would have raped a human women, given that they were sharing the same cave,

V2: You could see that happening

HR: You could actually see that happening, right.

V2: You know, and again, it’s interesting you have these probititions against beastiality that are found in Levitical law. And, you know, that’s obviously there for a reason. The idea that there would be this interbreeding isn’t, you know, isn’t surprising, even from a Biblical standpoint.

You know, and as Hugh and I were talking, over the course of the weekend, you were mentioning too, Hugh, another instance that you do see hybrids of a sort, that are described in Scripture, and that’s the Nephilim.

HR: Well I’ve got Genesis 6:4 right here, it says, “the Nephilim were on the Earth in those days, and also afterwards, when the sons of God went to the daughters of men, and had children by them.”

Now there’s been a lot of speculation who these sons of God are, but there’s no doubt that these Nephilim were a different kind of creature. Goliath was at least 9 foot 9, carried at least 250 pounds of armor into battle. That’s something a human can’t do. Yet they were doing this, and God saw fit to wipe the Nephilim off the face of the Earth.

And as a supporting text, you’ve got Jude 6, which says, quote, “angels who did not keep their positions of authority, but abandoned their own home, these he has kept in darkness, bound by everlasting chains.”

Now when you read this in the original Greek, it’s actually accusing these fallen angels, of some kind of beastiality. And so the fact is, that there is interbreeding evidently going on between angels and humans, wicked angels and wicked humans. Therefore, we shouldn’t be surprised that that could be happening with two Earth-bound species. And the fact is, that verse in Leviticus is there for a reason, that strong prohibition to, you know, avoid sexual intercourse with animals.

FR: And so now God destroys the angel-human hybrids, but apparently he’s not destroyed the hybrids that were produced by humans and Neanderthals.

V3: And that’s where I’d like to bring Ken in. Ken, there are lots of theological implications, other than the ones already being discussed here. What comes to peoples’ minds, in this kind of thing, is why would God allow this kind of thing to happen, in that this doctrine of the image of God seems to be a recurring theme. You write about it, talk about it, the guys here talk about it a lot. And also, Jesus was the God-Man, wasn’t he. So did he have some Neanderthal, how do we think about these things?

[discussion of how the Nephilim may have been “demon-possessed men”, or e.g. kings, instead of angels]

HR: …I’ve seen blogs to the effect that the Sons of God having intercourse with the Daughters of Men are Neanderthals, so I mean, a whole new a

FR: Although that doesn’t fit in the sense that the Bible clearly describes the Nephilim as being destroyed by God. So if that was the case, then there should be no evidence for…for the gen-, for the Neanderthal [interbreeding]…

HR: There should be no evidence, I’m just saying, this is actually generating that kind of speculation.

(note, these guys don’t believe that the Neanderthals are the Sons of God, they are just commenting on what they see as a silly idea)

KR: But in the sense of, did the hybrids have the image of God, or not, if they were a 50-50 blending of human and Neanderthals. In a sense it’s hard to know whether that’s the case. But I think it’s critical to realize, those hybrids, as they interact with other humans, very quickly that impact…

HR: …that impact was highly diluted…

KR: …that impact was diluted out, so that eventually you’re gonna have a human being having intercourse with another human being.

HR: Kind of like the Nephilim, Joe, those hybrids didn’t last. So whether they had the image of god or not, it doesn’t really matter in terms of the present status of human beings. They died, just like the Nephilim died, so that effect doesn’t remain.

JA: [attempting to wrap up, the show is going long] OK, very good, fascinating stuff. Thank you gentlemen. On the one hand, you know, talking about something repugnant in human history, but here for us to explore all the implicati–

FR: Well, you know, in a sense, I look at a study like this as actually a positive thing. You know, initially the reaction to this is that it does create discomfort for the RTB model, but as you begin to think through these issues, it actually helps us to flesh out a more detailed Biblical model for human origins, as opposed to, you know, essentially the discovery causing us to abandon our model. So this is forcing fine-tuning of the model, but I don’t think it’s causing us to abandon the model. And again, it’s not fatal for the model, but rather healthy for a model. To me again, the encouraging thing is that a lot of this that’s being discovered here, supports our model, and is consistent with our model.

HR: Paul, I’m excited because…[talks about how this confirms some of the stuff in RTB books]