I occasionally get books for review unsolicited, and many of them are not worth noticing. However, Kostas Kampourakis’ Understanding Evolution is a wonderful resource for students of all kinds, including biology students. 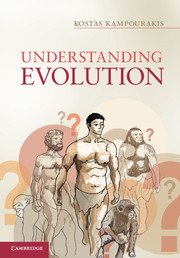 Kampourakis, a philosopher at Geneva, has compiled and discussed sensibly a range of topics concerning evolution. He begins with the conceptual difficulties people have in understanding the evolutionary process, and why. In chapter 1, he discusses how we know about evolution, what questions it answers, and considers two cases that are close to home: domestication and epidemiology, the evolution of disease.

The evolutionary questions are about why living things evolved the way they did, about speciation, the process of evolving new species, and the hypotheses that these require. He talks about explanation (especially “inference to the best explanation”) and the use of scientific method in evolutionary biology. The sections on domestication of animals and on epidemiology are satisfyingly complete.

Chapter 2 covers religious objections to evolution, including, of course, creationism and intelligent design. He discusses the arguments made by ID, especially in the context of atheism and agnosticism. Arguments from design in nature are expounded and given a thorough treatment, including “artifact thinking” and complexity.

The he discusses world views in conflict, especially relating to Richard Dawkins’ views, and then more widely the views of both theist and atheist scientists. Gould’s “nonoverlapping magisteria” and Simon Conway Morris’ inevitability thesis are also reviewed. There is a nice discussion of the differences between knowing and believing and various kinds of methodological and metaphysical naturalisms.

Chapter 3 is titled “Conceptual difficulties to understanding evolution”. Here he discusses psychological essentialism in detail, and the “design stance” that Dennett identified. The problems of conceptual change, which I have published on myself, are then discussed. An example he uses is the shift from geocentric thinking to heliocentric thinking, and it is a good case study. The discussion on essentialism and design thinking, especially of artifacts, appeals to the psychological literature in detail.

Chapter 4 gives a complete and up to date account of how Darwin himself came to his theories. In particular he discusses how Darwin thought varieties became species, and gives a nice timeline of Darwin’s intellectual development. The chapter concludes with a discussion of how scientists and the religious reacted to the Origin.

Chapter 5 is about common ancestry. Usually books of this type focus upon natural selection, as if that were where Darwin’s originality lay. Kampourakis knows that Darwin’s true novelty lay in this idea instead. He explains how genealogical thinking allows us to reconstruct and classify the history of nature, and how thinking in terms of a historical tree of life made all the difference (and was Darwin’s first and main problem to solve). There’s a good discussion of molecular evolutionary biology here.

He gives an account of an often misunderstood notion in biology: homology. This is followed by phylogenetic classification and construction, and a discussion of the question of apparent similarities in biology: convergences (analogy, or homoplasy). Many clear and useful diagrams make the chapter even easier to follow. Then he considers the role of developmental thinking, and how evolution often modifies the timing of development.

Chapter 6 is titled “Evolutionary change”. It discusses “deep time” and dating of taxa and their divergence. Here he notes that while selectionist accounts are important, much evolution is stochastic, that is, chance. He discusses the difference of within-species evolution (microevolution) and between-species evolution (macroevolution) and gives a good summary of scientific ideas about these, especially the “major transitions” literature. The “selection-against” and “selection-for” distinction is explained here. Speciation and extinction are also explained. Then he returns to the question of inference, in a historical science like evolution.

Finally, in his concluding remarks, he discusses what evolution does, and does not explain, especially with respect to ethical and religious questions.

Each chapter has a good reading list, and the material is up to date in both science, and philosophy and history. He takes stances throughout but does so explicitly, allowing the reader to decide what to think for themselves.

This is an excellent, and long-needed book. The education of evolution in schools is now so poor in many countries, that this can act as both a primer and as an invitation to think further, and I would recommend it unreservedly to anyone who wants to know what evolution really is and means. It is not cheap, but neither is it as expensive as many books of its kind. Buy a copy.