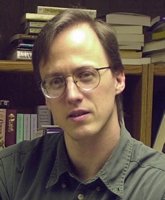 I had the opportunity at the end of this month (May 2016) to update an interview I did four years ago at TheBestSchools.org.

The reason this divergence between young-earth and old-earth creationists is relevant to the problem of evil is that Christians have traditionally believed that both moral and natural evil are a consequence of the fall of humanity. But natural evil, such as animals killing and parasitizing each other, would predate the arrival of humans on the scene if the earth is old and animal life preceded them. So, how could their suffering be a consequence of human sin and the Fall? My solution is to argue that the Fall had retroactive effects in history (much as the salvation of Christ on the Cross acts not only forward in time to save people now, but also backward in time to save the Old Testament saints).

In this long interview, chock full of surprising comments on his fellow Christians, Dembski mentions Panda’s Thumb, and quotes our own Andrea Bottaro extensively, saying he “got it exactly right.”

In any case, outsiders saw clearly what was happening. The clearest was perhaps Andrea Bottaro, a biologist critic of intelligent design, who cut through this charade. At the Panda’s Thumb blog, he remarked,

Dembski said he is an inerrantist, not a literalist. I am not really up to speed with fundie systematics, but I think that is a fairly significant difference (to them, at least).

Also, I am pretty sure Dembski had to be an inerrantist (or profess to be) in order to be hired to teach in any Baptist seminary, so I think the big news, if any, is basically that Dembski explicitly stated that at this time he actually believes in Noah’s ark myth as it is described in the Bible. It’s a silly belief, and his groveling for forgiveness should be brought up any time the IDists whine about academic freedom, but it still doesn’t make him a YEC [= young-earth creationism, WmAD].

Dembski’s book (reportedly–I have not read it) states that he believes that the evidence for an old earth is strong and that this evidence is compatible with an inerrantist interpretation of Genesis. Although he oh-hums on the topic in his recantation [i.e., my four paragraphs in the White Paper, WmAD], he has not recanted it, and that alone rules him out as a YEC. In fact, strictly speaking his current recantation also leaves him open to later recant the recantation itself, because what he actually says says is that the Bible “**seem[s]** clearly to teach” the historicity of the flood myth, pending his “exegetical, historical and theological” (and pointedly, not “scientific”) work on the topic.

As much as I hate to admit it, Bottaro got it exactly right. I would still regard myself as an inerrantist, but an inerrancy in what the Bible actually teaches, not an inerrancy in what a reflexive literalism would demand of the Bible. Have I, as Bottaro suggests, left myself open to recanting the recantation? I have. Without the threat of losing my job, I see Noah’s flood as a story with a theological purpose based on the historical occurrence of a local flood in the ancient Near East.