Or, Responsible Programming is Not Censorship**

The local PBS affiliate, KNME TV-5, is embroiled in a flap largely created from whole cloth by New Mexico’s “Intelligent Design” (ID) creationists. Members of IDnet-NM have lobbied KNME for years to carry the ID documentary video called “Unlocking the Mystery of Life”. The KNME program director turned down requests to air the video last summer, telling IDnet-NM “…a reasonable segment of the public might readily conclude that the program was created solely to promote the interests of the funder.”

After that program director left KNME, IDnet-NM sensed a new opportunity, and managed to get somebody at KNME to schedule the ID video for Friday, Jan. 7th, at 9PM. When scientists in various watchdog groups (New Mexico Academy of Science, CESE, and NMSR) noticed the schedule, calls were made to KNME, asking why they had reversed their previous decision not to air the pseudo-documentary. When KNME senior management looked into the situation, the decision was made to pull the video. As reported in the Albuquerque Journal on Jan. 7th (subscription required),

The funders of this program have a clear and specific agenda that they openly promote,’ said KNME marketing manager Joan Rebecchi. ‘KNME has no position regarding this agenda, but we must guard against the public perception that editorial control might have been exercised by the program funders.’…

As soon as news came out that the ID video would not be shown, IDers and creationists began to scream Bloody Murder. KNME has been condemned locally by the Creation Science Fellowship of NM and by IDnet-NM, and nationally at World Net Daily, the Discovery Institute, Agape Press, the Southern Baptist Press, and the Discovery Institute’s new Blog. (The CESE site has a compendium of creationist whining about KNME.)

IDNet-NM took out a large ad in Friday’s Journal which declared “In Our Opinion This Is Unprecedented Censorship… It is unfortunate that New Mexico residents will be denied the chance to see for themselves the scientific evidence that directly opposes specific parts of Darwin’s theory of evolution, evidence that supports an intelligently designed universe. … Paid for by those in the Scientific Community that would like to see both sides of the debate allowed.” 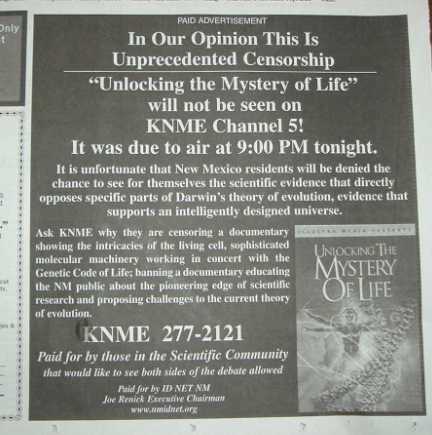 This is the IDnet-NM ad which ran on Friday, January 7th in the Albuquerque Journal.

Here’s where it gets interesting. The day before this ad ran, staffers at KNME offered a compromise. Although KNME couldn’t air the video because of its funding connections, it did offer to produce a local show featuring local scientists both for and against “Intelligent Design.” In this way, KNME said, the discussion could commence - free speech would be encouraged - and the debate would be aired publicly, as IDnet was demanding. NMSR members Dave Thomas and Kim Johnson agreed to appear on the half-hour show “In Focus,” which would have aired on Friday, Jan. 7th at 8:30 PM, but Joe Renick and Mike Kent of IDnet-NM refused to participate in the panel discussion, dismissing it as an “unproductive use of time.”

Why do the IDers complain about “unprecedented censorship,” and yet refuse to participate in an open discussion of these same ideas? I think the reason is the playing field, pure and simple. The “Unlocking” video has been very carefully crafted to look scientific, not religious. It avoids any substantive discussion, and is simply an ID propaganda vehicle. (Some Christian groups market the video as “the most impressive evangelistic tool ever made!”)

Renick’s and IDnet’s accusations of “censorship” are absurd, especially given IDnet-NM’s refusal to participate in a public discussion of this topic with mainstream scientists. Do the members of IDnet-NM want “both sides of the debate allowed,” as they claim? NO! They only want THEIR side of the debate to be aired. They will step into the ring ONLY if the fight is fixed in advance.

KNME should be applauded for not caving in to special-interest pressure to show this poor documentary. Even if the funding sources were sanitized, the video is no more worthy of airing on Public Television than are the “Apollo was a Hoax” documentaries popping up on FOX TV from time to time. As Molleen Matsumura said in a Jan. 6th e-mail,“Responsible programming is not censorship*.”

We know that KNME is getting anguished calls from misinformed creationists. How about sending them a congratulatory message? Here’s the Sweetest Message of All for a public television station. Also, check out KNME’s Science Crawl!

I was appalled by tonight’s [1-5-05] segment on KNME’s refusal to air the “Unlocking the Mysteries of Life” video. I have seen this video myself, and found it to be old-style creationism dressed up in a nice new lab coat.

I imagine the creationist community lobbied your station to carry an item about KNME. Of course, they didn’t tell you they were creationists. But that’s who they are, and it was obvious from your extremely slanted coverage.

You interviewed Rebecca Keller, representing the creationist position(now renamed “intelligent design” to obscure the religious source), but you didn’t interview even one mainstream biologist or scientist.

The list of other cities showing this video exists because creationists have been lobbying those cities hard, as they have been pressuring KNME for years, regarding this pseudo-documentary. Creationists desperately fear modern science, as they feel it is incompatible with their personal religion. (Most denominations have no problem with evolution, however.) And so, creationists hound public TV stations to show their material to the community, here and elsewhere. And they’re hounding YOU to make them out to be Martyrs. And you fell for it!

Did you know that…

* the producers of the “Unlocking” video also produce Christian films about Easter, the Passion, Hell, etc. ….

* the local creationist group, Creation Science Fellowship of New Mexico, had excitedly promoted KNME’s showing of “unlocking”, and is now protesting vehemently since the showing was rescinded;

* Calvary Chapel is promoting the showing on its web site…

* World Net Daily, a major Christian website, is rallying its troops against the tyrannical KNME….

* the main claim of the video, that natural processes can’t explain complicated living structures, has been clearly and carefully refuted in recent years, with ***major*** publications in Science and Nature…

You owe your viewers an Update on this story. Your coverage was clearly biased toward creationists, a fringe position in science.

You need to talk to some real scientists, biologists, etc. I can get you connected with hundreds.

My website, for New Mexicans for Science and Reason, has many articles on creation/evolution: http://www.nmsr.org Please also check out the web site for the Coalition for Excellence in Science and Math Education, http://www.cesame-nm.org

Thanks, and please - write or call.

You wanted Feedback - you got it!

From http://www.evolutionnews.org/: “First on Wednesday (Jan. 5), Albuquerque’s ABC affiliate KOB aired a story that correctly reported this a censorship of science. Their coverage was very good, although they did mistakenly identify Discovery’s Center for Science & Culture as the funder of the film, which is not true. …”

To be fair, KOB is the* NBC* affiliate…