As many of you know, I am here in Lawrence, Kansas to cover the Kansas State Board of Education’s kangaroo court on whether Intelligent Design Science should be included in the state science standards.

Courtney K.: Hi Steve. I heard those quotation marks. I am a real doctor, you know. I have a Ph.D. in Quantum Apologetics from a little place you might have heard of called MIT.

S2: Really? I didn’t know that the Massachusetts Institute of Technology gave out apologetics degrees!

CK: Oh. No. I meant the Marsupial Institute of Theology. It’s in Australia.

S2: Well, Dr. Courtney, you are here in Lawrence to argue to the Kansas Board of Education in favor of including “Intelligent Design Science” in the statewide biology curriculum. Without giving your strategy away, can you tell me exactly what your strategy will be?

CK: Sure, but that’s just the majority opinion of the committee, Steve. The majority on the school board support Intelligent Design Science, and they’ve got the votes. It’s their job to protect the public from the tyranny of the “viewpoint discrimination” being offered by the science committee.

CK: It’s simple, Steve Steve. A conspiracy of the darwinist orthodoxy paradigm. Just because you don’t read about IDS in the literature now, doesn’t mean that you won’t sometime in the future. ID is the science of the future–

CK: – hmm? You know, Lysenko was once an unknown biologist. Just look where he ended up. All it took was a little bit of government assistance to get the young interested in his program. Then, Wham! he was everywhere!

S2: So you see Lysenko as your model then?

CK: Along with Jacques Benveniste, yes. Sometimes the scientific establishment needs a push from those who know better in order to do the right research. 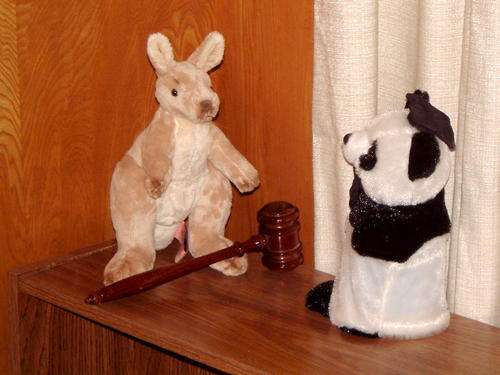 S2: But there are serious people doing Intelligent Design Science research right now? That seems to be what the Discovery Institute claims.

CK: It’s that conspiracy thing again. If the young, idealistic, forward-thinking, paradigm-breaking researchers let down their guard for a second, they will have no hope whatsoever of getting tenure. So they suppress their findings.

S2: The courage of their convictions, eh? But I remember hearing this point being made as long ago as 1996. Wouldn’t some of these researchers have already come up for tenure?

CK: Well, you might think so. But they’ve been busy with other things.

CK: Oh, no, no, no! They’ve had some health problems, first of all. Then their mother died, and they were just devastated by that. And finally, there was a run-in with the department chair, completely unrelated to Intelligent Design Science. Luckily the tenure commitee has – I mean, the committees have been willing to put the decisions off for a couple more years.

S2: Is this the case for “Mike Gene”? I recall that in 2002, Dembski had said that Gene was almost up for tenure, after which he would sprout a mature Intelligent Design Science from his forehead. That was almost three years ago.

CK: I don’t know anything about Mike Gene, except that he is a well-respected super-productive biologist at a small secular college, who will soon be a shining star in the Intelligent Design Science firmament. In the future.

S2: William Dembski has been called the “Isaac Newton of Information Theory.” Do you agree with this assessment?

CK: Oh sure! Although I’d probably say instead that he is more like the “Pierre de Fermat of Complexificationism.” You know how Fermat proved a major result, but didn’t have the space to write it down? Dembski’s just like that. He really does have a major result. He just hasn’t had enough space to convey its details. Maybe in his next couple dozen books he’ll be able to get the point across.

S2: Thanks for joining me. We’ll look forward to your further commentary as the kangaroo court progresses.