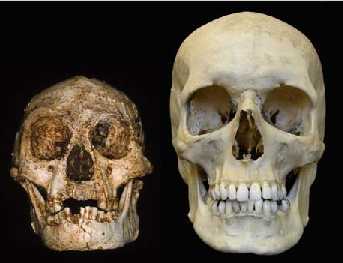 Several of the fossils of the celebrated “hobbit-sized” hominid Homo floresiensis have apparently been irreparably damaged by the researcher who spirited them away from the discovery team for months. This strange and sad story first appeared in USA Today on March 21st, and was reported in Science on 25 March 2005; (307: 1848)

Usually Carl Zimmer’s The Loom keeps us up to date on the diminutive Homo floresiensis with great posts like this one, but he must be really busy this week.

In what is being called a true case of scientific skullduggery, the remains of the newly discovered human species have suffered irreparable damage since entering the care of paleontologists. The damage to the bones of this diminutive being — named Homo floresiensis and nicknamed hobbit by scientists — is so extensive that it will limit scholarly research on the species, say members of the Indonesian Center for Archaeology-based discovery team. Considered the most important discovery in human origins in five decades, the remains are marred by broken jaws and smashed bones. … In November, the research took a bizarre turn into the politics of paleontology. Teuku Jacob of Gadjah Mada University, an Indonesian scientist unaffiliated with the discovery team, took the partly fossilized bones to his lab in Yogyakarta, Indonesia, 275 miles away from their repository in Jakarta. What followed was a standoff that set an older generation of Indonesian and Australian paleontologists against younger scientists. Jacob, 75, is considered Indonesia’s most prominent paleontologist, a role with added status in a country that reveres age and seniority. On the other side is the team of scientists that is based at the Indonesian Center for Archaeology but whose work is funded by the Australian Research Council. Aside from four leg bones that remain in Jacob’s custody, the fossils were returned on Feb. 23. The team charges the remains were severely damaged by rubber molds made at Jacob’s lab…

Johnhawks.net has some before/after pictures of the damaged fossils, and expresses disappointment with both sides of the issue.