Monarch butterflies are among the … um … well, monarchs of the lepidopteran world, at least in North America. Their numbers are declining. The decline is due in part to the loss of over-wintering habitat in Mexico caused by deforestation in the isolated forests in which migrating monarchs spend the winter clustered in trees, and in part due to the loss of milkweeds in North America, their sole breeding host plant, often regarded as a weed plant. As a result, whereas decades ago it was commonplace to see monarchs in roadside milkweed patches, today it is more and more of an ‘event’ to see even one monarch.

More below the fold

We keep a good portion of our land wild for the benefit of various two-, four-, six-, and eight-footed critters. Up at the north end there are a couple of patches of milkweeds that we don’t mow. Every year they reseed themselves, and the patches have slowly grown over the years. Up until fairly recently, every year we’d see half a dozen or more monarchs at a time in the milkweeds, feeding on the nectar of the blooms and mating and laying their eggs, one egg to a milkweed plant (at least that’s all I’ve ever seen on a single plant), stuck on its end to the underside of a new leaf high on the plant. Later we’d see the caterpillars chomping away on the milkweed leaves, in the process slurping up the bitter milky-white sap that gives them the noxious taste that protects them from bird predation. Last year, though, for the first time in 33 years, no monarchs appeared. Not one. While absence of evidence is not evidence of absence, seeing no monarchs last summer was depressing.

Today, though, about the time of year they’re expected, when the clusters of milkweed flowers are in full bloom, there was a female monarch pottering around in those milkweeds up on the north end, sipping nectar and frustrating the photographer by flitting away just about the time the digital camera decided it had a focus. Nevertheless, she was there: 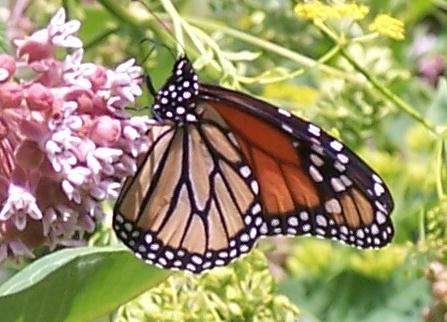 You can tell it’s a “she” by the relatively thick wing veins and the lack of a pouch-like swelling on a vein on the hindwing.

Monarchs are not the only insects that are attracted to milkweeds. I saw fritillaries, red admirals, and a couple of kinds of skippers up there this afternoon. Honeybees (the few that have so far escaped the Varroa mites), bumblebees, various flies and beetles, and the hummingbird clearwing (a moth that thinks it’s a hummingbird) frequent milkweeds too. 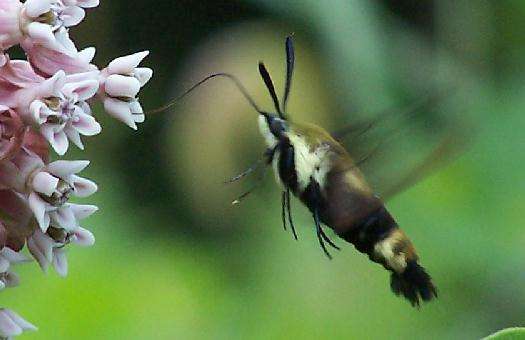 When I was a kid living in a tiny village of 250 people in the upper midwest, farm country had ample uncultivated habitat for a variety of critters. In the 1950s, though, Ezra Taft Benson, Eisenhower’s Secretary of Agriculture, encouraged farmers to plant crops from fenceline to fenceline. Later Earl Butz, Nixon’s Secretary of Agriculture, urged farmers to “get big or get out”, a reference to the rise of industrial farming with its intensive use of herbicides and pesticides. As a consequence of federal policies that supported those exhortations, the weedy cover along fence rows was plowed and planted, sloughs and wetlands were tiled and drained, insects – beneficial bugs and crop pests alike – were indiscriminately poisoned, and wildlife became scarcer and scarcer. I haven’t heard or seen a meadowlark in more than a decade. In a way I’m glad I’m getting old – I don’t want to watch many more species killed off by the short-sighted stupidity of humans.

But that one monarch was there today. I hope she is a mated female, or that she soon finds a suitor out there in the milkweeds.

And my neighbor to the north, who has a wild-ish acre or so on his place, agreed to take some milkweed seeds this fall and see if he can get a couple of patches started. Every little bit ….