Hello everybody. I thought I should bring you all up to date on my travels. I have just visited Hawai’i, where I did some lecturing, research and field work. Naturally, everything I encountered supported evolution and modern biology. I’m still looking for evidence of creation, but to no avail. The reason I went to Hawai’i is that Carolus Linnaeus, the founder of modern taxonomy, believed that Eden was on a large island in the middle of an ocean, and considered it might be the Pacific. Since there is no bigger island than Hawai’i in the Pacific, if you exclude all those inconvenient islands in south east Asia and the southern Pacific (Australia, where annoying philosophers come from, and New Zealand, which has - or had before feral cats arrived and possums from Australia were let loose - some of the most extraordinary fauna anywhere). I didn’t find any evidence of Linnaeus’ Eden, though. Anything that is like the fauna of the rest of the world has been introduced in the past 1500 years by humans, who aren’t too bright.

For example, they introduced mongooses (mongeese?) to the islands to eradicate the rats that were introduced, probably by the Polynesian ancestors of native Hawai’ians, as well as European sailing ships. Only problem is that the mongoose is a diurnal (daytime) hunter, and rats are active at night (nocturnal). They sure eradicated a lot of native ground nesting birds, though… which left more habitat for the rats. So it all worked out.

Let me show you some pictures. 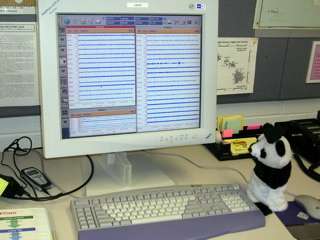 I went to the Pacific Tsunami Warning Center in Oahu, where I showed the station staff how to detect tsunamis. They seemed to appreciate it. But geophysicist Dr Stuart Weinstein of the center needed to give that Australian fellow John Wilkins a long disquisition about plate tectonics, the physics of earthquakes and tsunamis and the telecommunications connection with Pitcairn Island, which I gather is state of the art. 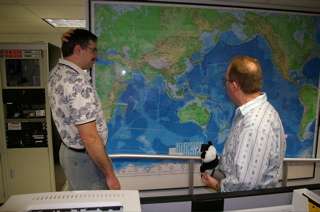 See? I’m helping Wilkins, although I’m a little uncomfortable about how he’s holding me here. Between you and me, I don’t think he’s the “full quid” as those Australians say. He need to be shown on the map where Australia was. When we asked him where he came from, we got some garbled explanation about a couple of cities called Melbun and Brisbun, as far as I can recall. Even Stuart is looking confused here, and no wonder. People who name their cities after pastries are hard to understand.

Then I visited the University, but only after I had a little snack. It’s hungry work being a sage. 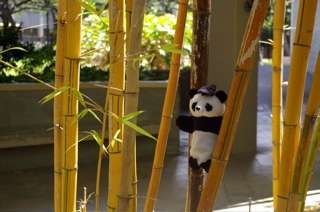 Fortunately, they had a fresh stand of my favorite fast food. But I had to eat and run, as I had an appointment. 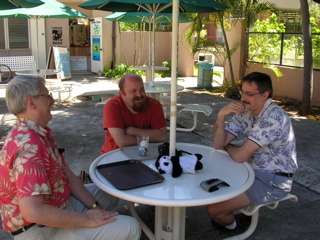 After delivering a talk to the zoologists and botanists at the University of Hawai’i, Monoa, some of the less obviously employed hangers on went with me to have a beer, or in my case six. From left, Dave Fritzinger, of the cancer research centre attached to the university, Mike Dunford, who was hosting another hanger-on, Wilkins, not shown (I think he was attending to the necessaries at that point - some people can’t hold their beer) and is a doctoral student in zoology, and Stuart Weinstein, one of the aforementioned seismologists who benefited from my knowledge earlier. I’m not falling down drunk, as unpleasant folk might rumor. I’m resting after a long thought. 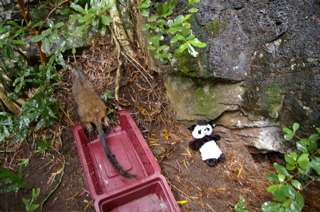 Mike and I, and that hanger-on (still unable to hold his beer) went up a very dense bit of rainforest to release a wallaby that had been caught earlier in an inhabited area. Wallabies are not native to Hawai’i, but little now remains of what was. Here I am ushering the wallaby up the slope to its home range. These wallabies are descended from a pair that escaped from a private zoo sometime in the 20s, I think. As you can see I had to do the release myself as the other two just weren’t up to it. Something about how wet and slippery it was, and how steep and overgrown the vegetation. Poppycock! In my day we thought nothing of running up mountains covered in rainforest and carrying 300lbs of specimens back down to base camp. In bare feet, or in my case, bear feet. 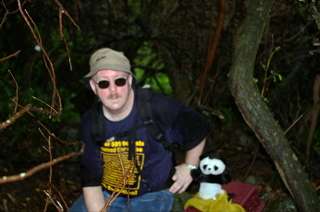 Here’s that hanger-on. Pasty looking fellow, isn’t he? He’s a philosopher, which explains why a little bit of exercise leaves him so wasted. I’m giving him encouragement and motivation here, which he sorely needed. Just because it’s poring rain, and the rocks are both slippery and fall when you stand on them, you’d think he never released a wallaby before. He’s from Australia, isn’t he? They ride them to school over there, I gather.

I was pleased to see he was wearing a t-shirt about Project Steve, which lists over 500 actual scientists named Steve who confirm that evolution is the only viable scientific theory about origins. Unfortunately, Mr. Wensleydale, the NCSE courier, has my application form, but has been unable to catch up with me in my travels. 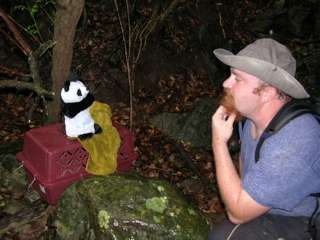 Mike, on the other hand took it all in his stride, even showing sufficient good sense to listen to me as I explained the nature of the geology, biology, history and economics of Hawai’i, and how to release the wallaby safely. A clever man that Dunford. He’ll go far. If only he’d brought my raincoat, I’d have granted him his doctorate right then and there. 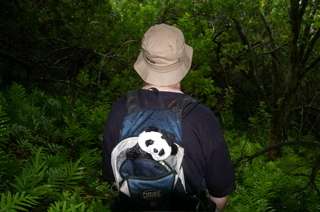 Wilkins was bestowed the honor of assisting me down the hill, since I had done all the hard work coming up. Besides it meant I didn’t have to listen to his complaining, or as the Australians call it, whinging. They’re good at it, for darned sure.

Well, that’s all for now. At some time in the future I may go visit Australia to find out how people so amazingly ignorant can get doctorates. I know a few real thinkers there who I have respect for, so I’ll go visit them too, and find out why they stay there. For now, Aloe, which is how Hawai’ians say “g’day”.