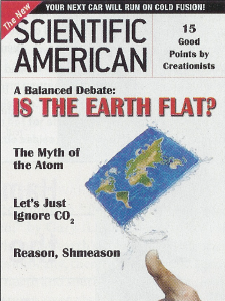 Just as the storm was breaking over Bush’s “teach both sides” comments last week, I found myself in the airport. While there, I picked up the latest issues of Scientific American and Discover. SciAm evidently is still getting letters from its widely-blogged, April 1 prank, “OK, We give up: We feel so ashamed.”

In the letters section, they reprinted the fake cover they included in the print version of the April issue. Since the fake cover graphic never made it to the web, I figured it would be apropos to upload a scan of it (left) to remind everyone where the “teach both sides” logic naturally leads.

From Susan Suver came admiration and an extra measure of encouragement – “I am so hot for all of you. If it’s wrong to want to marry you en masse and have your smart, snarky little babies, I don’t want to be right. Thanks for saying what so desperately needed to be said.” 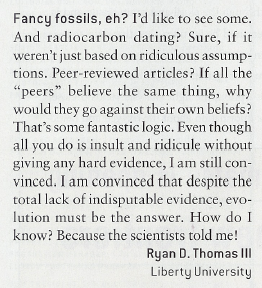 I thought the positioning of the latter letter was interesting: 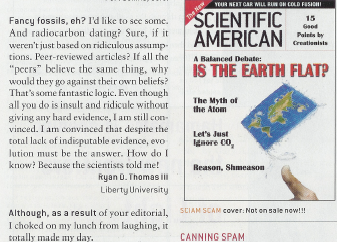 Also in this month’s SciAm, a well-illustrated article on “The Early Evolution of Animals,” by Dan Bottjer, one of the discoverers of Vernanimalcula guizhouena, a microscopic bilaterian worm fossil from 40+ million years before the beginning of the Cambrian. This discovery was reported in Science in 2004, and must have really annoyed Stephen Meyer and crew, who only in 2003 boldly wrote, in “The Cambrian Explosion: Biology’s Big Bang,”

Others have explained the absence of transitional organisms as the result of their putatively tiny size. Some have even suggested that transitionals only existed in the larval stage. While possible perhaps, it should be noted that cells of filamentous microorganisms (interpreted as cyanobacteria) have been discovered and documented in the Warrawoona Group strata of western Australia. These microfossils, found in bedded carbonaceous cherts, are estimated to be between 3.3 billion to 3.5 billion years old. Species of single-celled algae and the appearance of cells with a nucleus about 2.7 billion years ago have been well documented in the fossil record. If paleontologists can find minuscule single cells in formations that are far older (and therefore far more rare due to the greater likelihood of tectonic destruction), it would seem that the allegedly tiny fossil precursors of the Cambrian animals should have been found somewhere in the over 500 million years of sedimentary strata below the Cambrian. Moreover, as already noted, the Precambrian rocks in China beneath the Chengjiang Cambrian biota reveal the presence of tiny sponge embryos at the very earliest stages of cell division. If the fossil record has preserved such tiny organisms in Precambrian strata, why has it not preserved any of the allegedly miniature or soft-bodied ancestral forms of the animals that first appear in the Cambrian? If these strata can preserve embryos, then they should be able to preserve the ancestral animals to the new forms that arise in the Cambrian. But they do not.

Drat, foiled again! You’d think those ID folks would learn to stop making empirically-testable claims about gaps in the fossil record, after the recent debacles with feathered dinosaurs and walking whales.