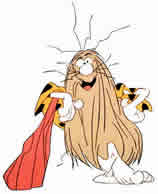 When Cavey Jr.’s school refuses to teach evolution, Captain Caveman turns to Harvey to defend the hariy little boy’s right to an education. Harvey not only has to prove evolution but also explain the existence of a talking caveboy. As if that’s not enough, Harvey also suffers his latest existential crisis at the hands of Reducto. A rousing song and dance number follows.