Since last week’s report, there have been several developments in the Rio Rancho situation, wherein the local school board adopted a new science policy that, according to the Sept. 2nd Albuquerque Journal’s print edition

means teachers will lead discussions on alternative ideas to evolution.

For starters, on Thursday, the Flying Spaghetti Monster (info) has again reached his noodly appendage beyond the internet, into Mainstream Media, or at least to the twice-weekly pages of the Rio Rancho Observer: 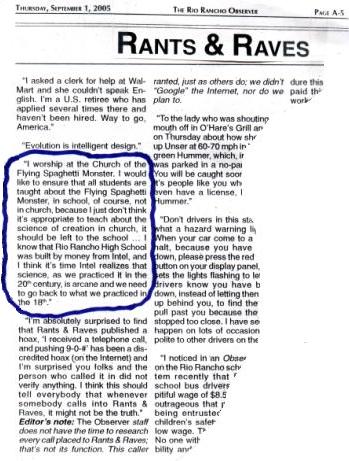 And also yesterday (Sept. 1st), several science chairs from the University of New Mexico recommended that Rio Rancho’s Policy 401 should be abolished.

The professors’ statement is discussed in the Albuquerque Journal in this Sept. 2nd article by Elaine Briseno (subscription).

The entire August 25th New Mexico Academy of Science statement was printed in Thursday’s Rio Rancho Observer (albeit on a different page than the FSM’s appearance), putting these words on the ground in embattled Rio Rancho:

If scientists simply agreed to disagree about “the meaning and interpretation of data,” scientific progress would cease. Science is about testing ideas and claims, not pretending that all ‘interpretations’ are equally valid.

And finally, my op-ed in the Albuquerque Tribune also was published on Thursday, Sept. 1st.

Once Pandora’s box is opened, there won’t be enough time for real science. There isn’t time to really explain all this junk in class. Supporters of intelligent design count on that, knowing that the take-home message will be: “Evolution has holes, so a miracle must have occurred.” The Rio Rancho policy is already causing problems. The day after the policy was passed, Bibles and intelligent design were brandished in chemistry and anatomy/physiology classes at Rio Rancho High School, disrupting them. Additional incidents have been reported.

I’ve added a page to the NMSR website for easy reference to the ongoing saga.

The Flying Spaghetti Monster is here in Rio Rancho! Now if only Professor Steve Steve would join him here.