As part of the Australian Science Festival, I went to one of the ABC's Science in the Pub programs on The Science of Siblings, in the congenial surrounds of King O'Malley's Irish Pub in Canberra. Paul Willis (another ex-palaeontologist! - not surprising as he can't spell it either) and Bernie Hobbs (pictured) led a stimulating discussion about siblings and twins. 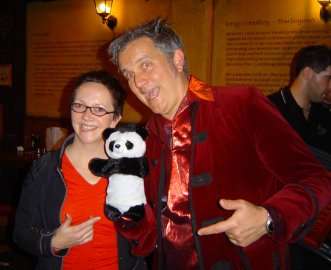 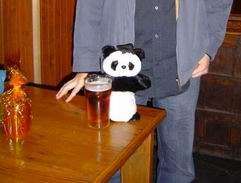 I attended with Chris Nedin (the Archaeopteryx FAQ) and Jim Foley (occasional Panda's Thumb contributor and Fossil Hominids author). I am a solitary panda (having been told that one of me was more than enough), Chris has a twin sister, and Jim is an "Irish twin" - he has a non-twin sibling born in the same year, so we had all the permutations covered! I did my share of chairing, and there was beer, wine and mugs of chocolates to be had. I stuck to beer and mugs of chocolates as they were more my size. The whole affair was recorded to be broadcast on national radio at some time to come. I wasn't recorded, but Chris was (he even got a laugh - although I don't know whether it was because of his comments or the fact that he's an ex-palaeontologist).

Next stop is Adelaide, to visit that nice Dr Musgrave and help him tighten up his chapter on Intelligent Design. Once he heard that I was going to Adelaide, Chris has told me not to miss his Big Dick. Honestly, I've never seen someone so excited, just because Chris' Dick is over a metre long and is exhibited in the South Australian Museum! To humour him I've said I'll take a peek. All will be revealed.