From London comes the astonishing news that the unmistakable image of Charles Darwin has appeared in the bottom of a postdoc’s frying pan. Scientists around the world1 are puzzled about the possible mechanism that might have resulted in the 19th century naturalist’s portrait being deposited on the suface of a cooking utensil.

In one attempted application of the Explanatory FilterTM it was found that the probability of this occurance is less than that of fairy circles appearing to form a mole on the face on Mars2. (This is, coincidentally, precisely equal to the probability that Nicholas Caputo would have hit David Berlinski if he had fired an arrow at Albert Einstein’s door during a total solar eclipse.) 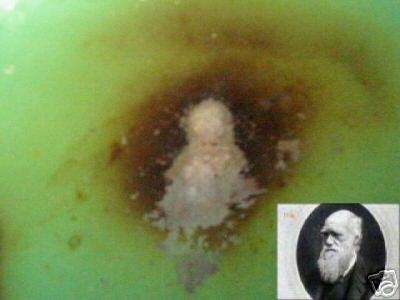 Scientists say that the object’s being specified is beyond doubt. An anonymous fellow of an anonymous Intelligent Design PR firm, when asked on background and off the record, responded that “Objectively, we can only conclude that the image was designed by an intelligence3, perhaps by means of infinite wavelength radiation emanating from the stove of the discoverer’s flat.”

It has not yet been ascertained whether the pan’s dicoverer was cooking spaghetti at the time the image appeared.

The owner and discoverer of the miraculous pan has opened bidding for the object on ebay. All proceeds from the sale will benefit the American Civil Liberties Union, which conserves the civic values – including freedom of religion supported by the separation of church and state – of the United States Constitution and Bill of Rights.

1One in London, one in Princeton. 2Work not shown. 3Maybe supernatural, maybe not.

[Comments have been closed for this thread. Please continue the conversation at After the Bar Closes.]