Hi all. I’m on a quick trip back to the states, after having recently been in China with Dr. Steve Case visiting my relatives at the Panda Reserve. Today I was invited to a meeting of Kansas Citizens for Science (KCFS) by my friend Jack Krebs, newly elected president of KCFS. Of course things are hopping in Kansas – the state standards which Jack and Steve worked on received an F from the Fordham Foundation because the state school board inserted a bunch of creationist stuff in them, the much awaited Dover decision may have bearing on the potential legal situation in Kansas, elections for the state Board of Education in August may determine whether the creationists stay in power, and so on.

Of course it wouldn’t be my place to comment on any of the day’s deliberations, but I thought I would share with you all a little bit of the flavor and ambience of a KCFS meeting.

First, some KCFS Board members regularly meet for lunch before their meeting at the Blind Tiger Brewery in south Topeka. I was warmly welcomed, and enjoyed the spirited company. Some of these folks have been working together since 1999, so there is lots of good spirits and informed conversation.

Here is picture of me looking over the menu – but alas, again no bamboo. (They do have good beer, though – brewed right on the premises.) 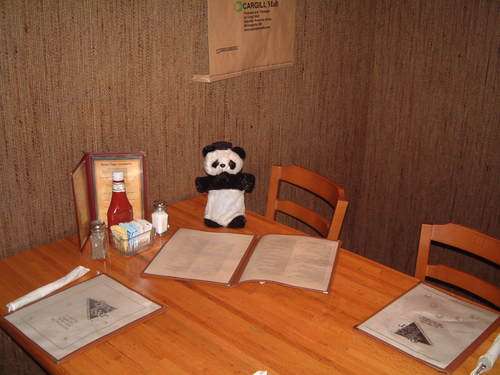 I met many KCFS members – here is newly elected Vice President Phil Baringer. Phil is a physics and astronomy professor at the University of Kansas. 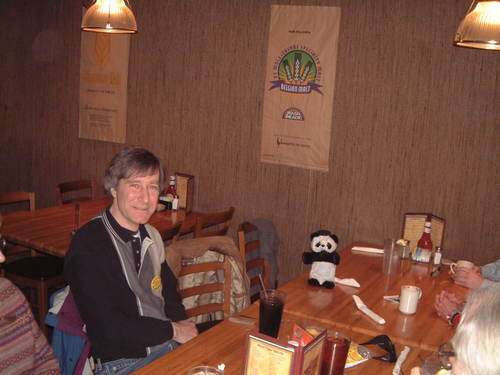 I was especially glad to meet Gordon Elliot. Gordon has been a KCFS Board member for years, as well as a member of numerous internet forums. Here’s a picture of Gordon and me. 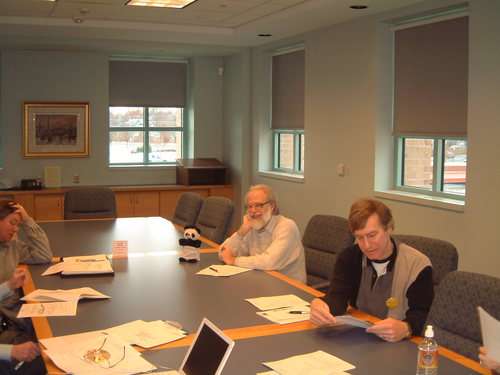 Jack told me that a reporter recently asked him about the history of KCFS, and whether there were similar organizations in other states. KCFS was formed in 1999, and was the first Citizens for Science group with that name (although our friends in New Mexico had an earlier similar organization.) Now there are about fifteen such groups.

Of course it’s too bad we even have to have such groups, as most have been formed in response to various creationist attacks on science and science education. But given that political reality, it’s great to see college professors, high school educators, businesspeople and other citizens working together. KCFS’s mission, I was told, is to “promote a better understanding of what science is, and does, by advocating for science education, educating the public about the nature and value of science, and serving as an information resource.” I was pleased to get to see some of the KCFS folks at work today trying to fulfill their mission.