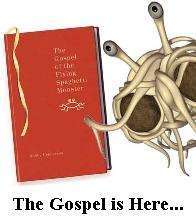 But not everyone finds the FSM so amusing.

It’s too bad that they’ll get attention for this sort of drivel when we have a robust scientific research program that the media doesn’t seem to want to write much about,

I’m puzzled. It seems the main output of Discovery’s “robust scientific research program” has been books like Behe’s “Darwin’s Black Box,” or Phillip Johnson’s “Darwin on Trial.” So, by publishing a book about His Noodly Appendage, isn’t Henderson performing research as robust as that of the Discovery Institute?