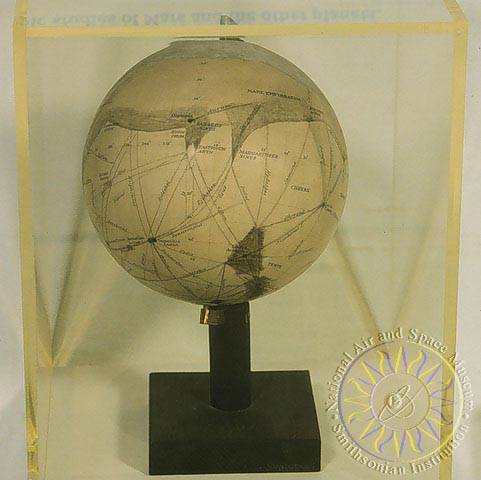 In an almost comical display of lack of self-awareness, Jonathan Witt of the Discovery Institute has recently taken inspiration from Google’s homage to Percival Lowell, the 19th century astronomer who argued for the existence of a system of engineered channels on the surface of Mars, to extract from this glorious scientific blunder the lesson that science moves, at times, “backwards”, i.e. rejects apparently established theories for more traditional, often religiously inspired views (something that Witt clearly wishes would happen far more often).

In addition to Lowell’s channels-on-Mars theory, Witt mentions in his article the idea of a Universal Beginning and opposition to spontaneous generation as other instances in which ideas originally found in the Judeo-Christian tradition have at some point worked their way back into the scientific mainstream. I’ll just pass on discussing Witt’s rather simplistic ideas about modern cosmology and abiogenesis, not to mention the history of science, since his arguments are just a rehash of well-known ID and Creationist talking points that have been abundantly critiqued before. I want instead to point to another obvious, and far more topical lesson that Witt could have taken from Lowell, but, alas, didn’t.

The most striking aspect of Lowell’s argument for the artificiality of Mars’s “channels” is, in fact, its uncanny resemblance to modern arguments for the intelligent design of biological structures. Luckily for the interested reader, Lowell’s first book on the subject, titled simply Mars, seems to be the object of some sort of cult following, and can be found online in its entirety (chapters 4 and 5 are the most relevant to the discussion here). For any ID connoisseur, reading Lowell’s original arguments is an exercise in dÃ¨jÃ¡ vu (eat this French, Berlinski!), since they are an almost perfect example of design inference as currently practiced by ID advocates.

Essentially every fallacy of modern ID inferences can be found in Lowell’s book. You will find confident claims about the manifestly non-natural basis of the observed structures:

… the aspect of the lines is enough to put to rest all the theories of purely natural causation that have so far been advanced to account for them. This negation is to be found in the supernaturally regular appearance of the system, upon three distinct counts: first, the straightness of the lines; second, their individually uniform width; and, third, their systematic radiation from special points.
… Physical processes never, so far as we know, end in producing perfectly regular results, that is, results in which irregularity is not also discernible. Disagreement amid conformity is the inevitable outcome of the many factors simultaneously at work. … That the lines form a system; that, instead of running anywhither, they join certain points to certain others, making thus, not a simple network, but one whose meshes connect centres directly with one another,–is striking at first sight, and loses none of its peculiarity on second thought. For the intrinsic improbability of such a state of things arising from purely natural causes becomes evident on a moment’s consideration. … Their very aspect is such as to defy natural explanation, and to hint that in them we are regarding something other than the outcome of purely natural causes.

You will find references to diagnostic features of basic human design, and analogies with known designed structures:

That the lines should follow arcs of great circles, whatever their direction, is as unnatural from a natural standpoint as it would be natural from an artificial one; for the arc of a great circle is the shortest distance from one point upon the surface of a sphere to another. … In fact, it is by the very presence of uniformity and precision that we suspect things of artificiality. It was the mathematical shape of the Ohio mounds that suggested mound-builders; and so with the thousand objects of every-day life.

(I can almost hear Behe arguing about Mt. Rushmore!)

Specious mathematical/probabilistic arguments and analogies are there too:

Simple crossings of two lines will of course be common in proportion to the sum of an arithmetical progression; but that any three lines should contrive to cross at the same point would be a coincidence whose improbability only a mathematician can properly appreciate, so very great is it. … Of course all such evidence of design may be purely fortuitous, with about as much probability, as it has happily been put, as that a chance collection of numbers should take the form of the multiplication table.

Strikingly, you will even find claims that the “overhelming impression of design” is prima facie evidence of actual design:

Their very aspect is such as to defy natural explanation, and to hint that in them we are regarding something other than the outcome of purely natural causes. Indeed, such is the first impression upon getting a good view of them. How instant this inference is becomes patent from the way in which drawings of the canals are received by incredulously disposed persons. The straightness of the lines is unhesitatingly attributed to the draughtsman. Now this is a very telling point. For it is a case of the double-edged sword. Accusation of design, if it prove not to be due to the draughtsman, devolves ipso facto upon the canals.

Finally, Lowell knew he could not formulate a convincing argument for design without tackling the fundamental issue underlying design of any kind, that is, its purpose. Just like ID advocates who, in order to support their design inference, find themselves forced to conflate function with purpose, so did Lowell have to justify the existence of this elaborate channel system with some sort of anthropomorphic goal. He thus claimed that, since Mars is clearly a dry planet, the existence of channels was entirely justified as part of an irrigation system (indeed, he went as far as describing the existence of putative “oases” at the intersection points of the channels).

Now, Lowell’s argument about the “purpose” of the Mars canals was clearly more far-fetched than most of the equivalent arguments of modern ID advocates about the “purpose” of biological structures, but one should keep in mind that Lowell, unlike Behe, Dembski, etc, didn’t have the benefit of actual science providing convenient, empirically tested functional explanations for his supposedly designed structures. In fact, when faced with structures whose functional properties are unknown, ID advocates do not fare much better than Lowell: for instance, Jonathan Wells has claimed that since centrioles (which are sub-cellular structures of unclear function that participate in the cell division process) look superficially like man-made turbines, they must be, and he built around this spurious assumption a whole fanciful model of what teeny-weeny turbines could actually be doing in the context of eukaryotic cell division.

Finally, if you are wondering how Witt could have missed the obvious parallels between modern ID advocacy and Lowell’s “martian” design inference, let me point to Witt’s vitae page on the Discovery Institute site, where Witt proudly claims to have discovered the fallaciousness of “Darwinism” after getting over all those pesky “arcane scientific data” and “jargon”:

They claimed to rest their arguments on a wealth of arcane scientific data, but once I dug past the jargon, I found that their arguments were always built on a foundation of question begging definitions, either/or fallacies, bogus appeals to consensus, and quasi-theological claims that ‘an intelligent designer wouldn’t have done it that way.