Dear all, I must apologise for the lateness of my report on the December visit to London and the Natural History Museum. Blame Nedin, I do. I am in the midst of a walkabout in the wilds of Australia, encountering a number of highly venomous creatures, but more on that in a later update. 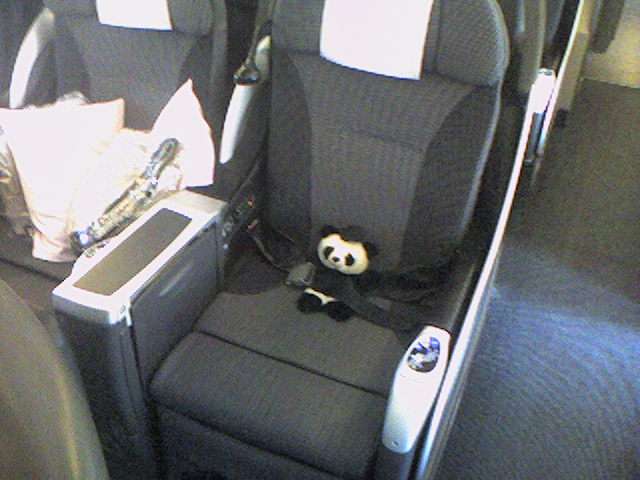 Anyhow, In December I travelled to London with Nedin. I, of course travelled at the pointy end of the plane, as befits my role as roving ambassador and famous panda. As you can see from the photograph, they have nice seats up the front end, plenty of leg room, and lots of bamboo shoots specially ordered. So, after a relaxing, comfortable 20 hour journey, I arrived in London, where I spent a pleasant evening going through Nedin’s duty free scotch (which was only fair as Nedin had not arranged for bamboo shoots to be available).

The next morning (Saturday) we headed off to central London. Me, bright and eager, Nedin with a near visible burden of jet lag. Being a panda, I am of course, immune to jet lag.

The list of attendees (as best as Nedin can remember) was: 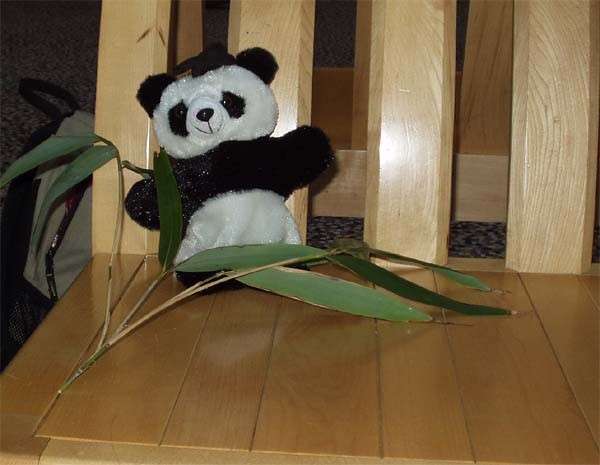 And a special mention must go to the delightful Mike Dworetsky who generously supplied some excellent bamboo shoots . Mike certainly knows how to impress a panda (Nedin take note). 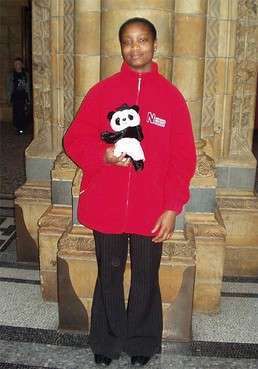 I was correct in thinking that I would be the only panda in the entrance gallery, and so was easy to spot by the intrepid band of Thumbers and t.oers, Once all had been introduced, and I had partaken of an elegant sufficiency of bamboo, I posed for photos beside the famous dinosaur in the main hall. Unfortunately due to the incompatibility of scale, we had to forgo capturing the whole dinosaur, to ensure that I was captured at the correct scale. We then progressed to the main staircase. On the way we stopped to chat to a friendly volunteer (right). 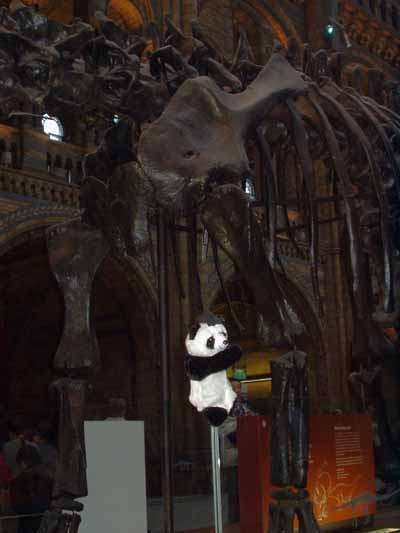 I always try to make time to talk to volunteers as they put in a lot of, often unappreciated, work for museums around the world. I like to think that taking a few minutes to chat to someone of my standing makes them feel that much better. Then it was up the stairs with a short stop at the feet of Sir Richard Owen, where we paid our respects, and posed for a group photo (see this, and other photos taken by Bob Ding, at http://photoposts.blogspot.com). After that we ascended to the first floor and the hominid evolution display 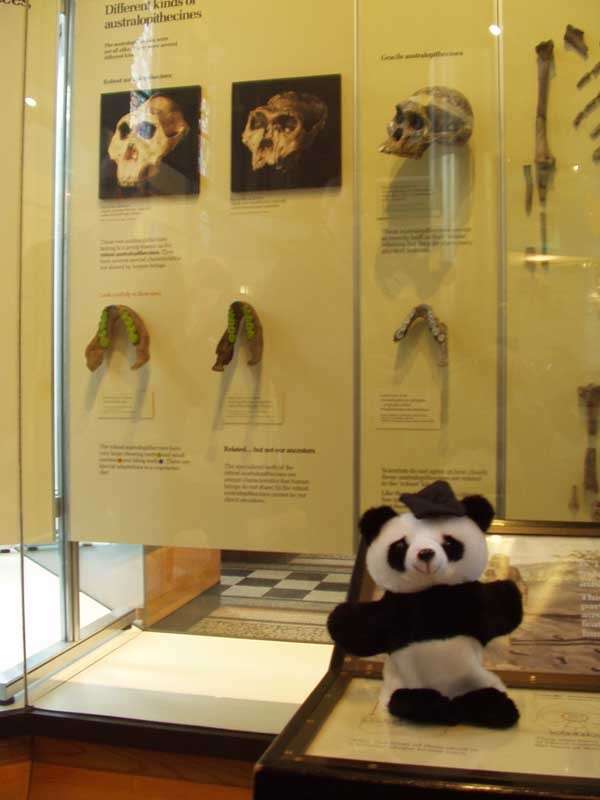 . Here I waxed lyrical on the evolution of the hominids with special reference to the characteristics of the Australopithecines, using Nedin as an example. The Museum also had some information on the ‘Hobbit’ finds, and I was able to give my interpretation on it and its place in the hominid lineage. Typically, the display stop short of documenting the next evolutionary step, the pandafication of hominids.

After the hominids, we wandered around to the Darwin exhibit, but unfortunately it was closed as the Museum was in the process of moving the exhibit to the new Darwin Centre. So we had to make do with some old displays outside, mostly concerning Darwin’s house. 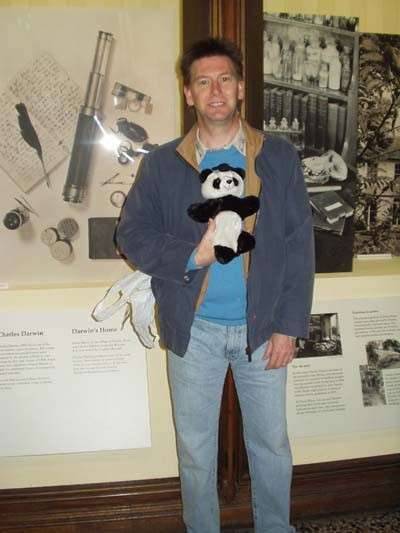 This photo was taken at the display and shows myself with Nedin and his friend Jet Lag (and the remains of my bamboo sticking out of his pocket). 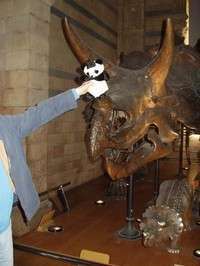 It was then back downstairs to visit the dinosaur exhibition. This was, naturally, very crowded, as dinosaur displays always are. Nedin was rabbiting on about dinosaur sex. I didn’t understand why, since if people can’t spot dinosaur sex when they see it, well, they’re just not trying. However, it turned out that he was on about how to tell the sex of a dinosaur! All very paleontological, and culminated in some very distasteful comments during the taking of the picture of the Triceratops.

Unfortunately we had to hurry through the dinosaur exhibition to be at the Darwin Centre in time for a talk by one of the producers of the TV series “Walking with Monsters”. The talk provided some insights as to how the animation was merged with real life shots, as well as some amusing anecdotes. After the presentation we took the opportunity to look at a number of displays related to Darwin which are being stored in the Darwin Centre. We also took the opportunity to do the obligatory “PZM” shot

. One would have thought that even a cephalophyle like PZM would tire of being sent photos of squid, but not a bit of it. He is thrilled every time he is sent one, even if he’s been sent it 30 or 40 times before. So be sure and continue sending him your squid shots.

As time was getting short we hurried on to the Earth Gallery, pausing only to get acquitted with a fine example of a Dodo 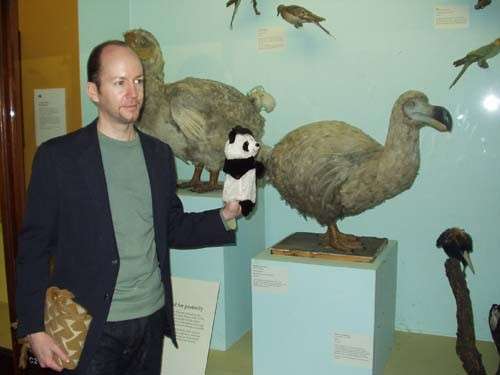 . I realise the photo make it look like a tag team rectal examination, but it is merely a trick of perspective. I can assure you that I did not have sexual relations with that dodo. On the way to the Earth Gallery, we stopped to admire the large display commemorating the great Mary Anning 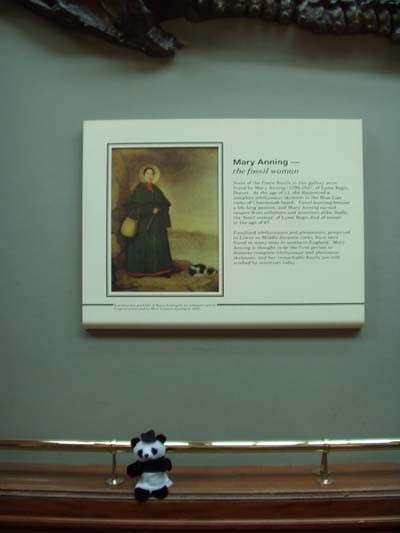 , the famous fossil collector. Examples of her ichthyosaur, plesiosaur finds covered an entire corridor wall. Very impressive. Much more so than anything Nedin’s ever found.

We did a fast run through the evolution of the earth display as we were beginning to eat into valuable pub time. There was a very nice Anomalocaris model, and a cast of the London Archaeopteryx, but by that stage, everyone’s thoughts had turned to beer and bamboo.

We then retired to a friendly ale house, The Goat Tavern if I am not mistaken, after a quick trip on a famous London red bus (alas not a legendary Routemaster). Some fine ales were had, along with food - the remainder of Mike’s generous bamboo donation for me. I, of course bought my round of drinks, and have the photos to prove it 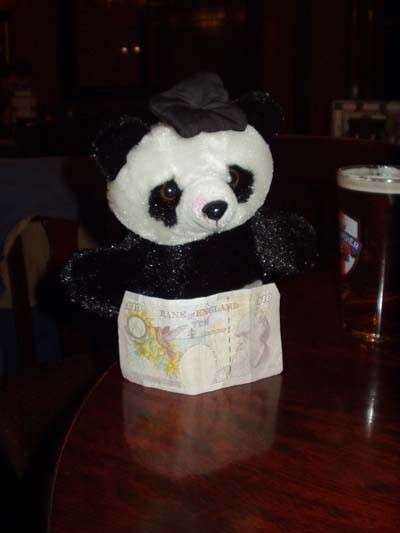 . Here I am buying the round with my favourite kind of money - i.e. somebody else’s - in this case Nedin’s. Being a panda, I obviously have no pockets and so have nothing to carry money around in. Nedin made some comment about silk purses and panda ears, but I wasn’t listening, as I was excited by the fact that the ten pound note had Charles Darwin on it. We spent a convivial couple of hours chatting until it was time for people to go home. I had a pleasant journey home munching on the last of Mike’s bamboo.

I’d like to thank all those who made the effort to attend and made it such a pleasant day out.

I think another visit to the Natural History Museum is in order, as there simply was not time to visit everything. Next time I’ll use my contacts and arrange to travel behind the scenes and chat to the people who work there.