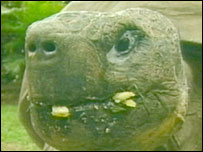 The last known living acquaintance of Charles Darwin, Harriet the Galapagos Tortoise, died recently after a short illness. She was only 176. Some IDists are so desperate for good news – and evidently so superstitious – they are hopefully interpreting Harriet’s passing as an omen (see “A presage of another death?”). Others might note that the fact that Darwin’s pet tortoise was an international celebrity, whose death was widely mourned, is not exactly encouraging news for the evolution-deniers out there.

A not quite totally inappropriate poem from Mike Myer’s 1993 movie So I Married an Axe Murderer:

So knowing, so trusting, so lov-ed.

He wants you back he screams into the night air, like a fireman going to a window that has no fire, ‘cept the passion of his heart.

I am lonely, It’s really hard.