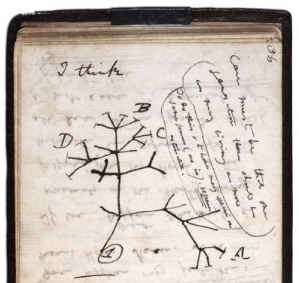 Due to the Darwin Correspondance Project, the Darwin Digital Library of Evolution at the American Museum of Natural History Library, modern Darwin scholarship by people like James Moore, the AMNH Darwin exhibition, together with the web, amazing things are now possible if journalists get interested in taking a serious look at Darwin and reactions to Darwin.

An example is an hour-long program entitled “Evolution and Wonder – Understanding Charles Darwin” that is being broadcast on many public radio stations on Sunday and Monday. It is also available for online download in streaming or mp3 format at the program website, which includes a large amount of additional material.

Rather than re-invent the wheel I will quote the summary from NCSE news:

The public radio show Speaking of Faith is doing a special show on Charles Darwin, his gradual development of the theory of evolution, and the various reactions, positive and negative, to the theory. The program is entitled “Evolution and Wonder – Understanding Charles Darwin” and features an extensive interview with Darwin scholar James Moore, the author of The Post-Darwinian Controversies, and coauthor, with Adrian Desmond, of Darwin: The Life of a Tormented Evolutionist.

“Evolution and Wonder” will be broadcast on many public radio stations on July 23 or July 24; its website contains a list of stations that carry the show and air times. The program is also available as streaming audio or a podcast mp3 file. Speaking of Faith is “public radio’s weekly conversation about religion, meaning, ethics, and ideas.” It is produced and distributed by American Public Media, and funded by the National Endowment for the Humanities.

The impressive website for the program contains many additional features:

* An annotated guide to the radio program, including images from the Cambridge University Library collection of Darwin material, and quotes from Darwin’s correspondence.

* A guided graphical tour of Darwin’s notebooks. Readers can click on an image of a notebook page, zoom in on certain areas, and listen to commentary from David Kohn, editor of the Darwin Digital Library of Evolution at the American Museum of Natural History Library.

* Additional audio from interviews and discussion that did not make the final cut of the broadcast show, including a panel discussion with Kenneth Miller, Robert Pollack, V. V. Raman, and Nancey Murphy, held in conjunction with the opening of the Darwin exhibit at the American Museum of Natural History.

* Recommended books and listing of the music played in the program.

* A page where listeners may submit their reactions to the show.

* A journal entry by Speaking of Faith’s host Krista Tippett, relating what she learned in putting together the show.