The ID proponents are still smarting from last years resounding defeat in the Kitzmiller case, where ID was publicly shown not to be science. Once again, the ID folks have posted their list of supposedly “peer-reviewed” articles that allegedly support ID. Unfortunately for them, this list is bogus, the articles are either not peer-reviewed by any standard working scientists would recognize, or if peer-reviewed have nothing to do with ID. The infamous Behe & Snoke paper, for example, shows that in the absence of natural selection, neutral drift alone can efficiently produce protein binding sites in realistically-sized populations in times consistent with the fossil record. This finding is hardly ID friendly.

But what is interesting is what is missing from this list, a paper from ID luminary Jonathan Wells. Why is this paper missing? It was in previous versions of the list. Could it be that Wells made a testable hypothesis, and it was shown to be wrong?

In 2005, Wells published a paper in which he claims that centrioles, small cylindrical structures associated with cell division and cilia, were turbines because, well, they look like human designed turbines to him (Wells, 2005). I will look at the turbine hypothesis in more detail later. As a design hypothesis it is fairly weak. The journal it is published in, Rivista di Biologia, is regarded as fringe publication, open to cranks. However, this did not stop the ID people from putting John Davisons’ barely coherent Rivista paper on the list. So why is Wells, hardly a marginal figure like Davison, excluded?

One thing that Wells did do was include a detailed testable hypothesis. True, the hypothesis is only marginally connected to the concept of intelligent design, but even more marginal papers were included in the list. Is it the very testability that is the problem?

Design is in the eye of the beholder.

Wells’s design hypothesis is based around a small organelle, the centriole (see image below). The role of the centriole is poorly understood, but it is thought to play an important (but not indispensable), role in aligning and separating chromosomes during cell division. It anchors long polymers of filamentous proteins called microtubules, which attach to the chromosomes. During mitosis, in a dividing cell, chromosomes are “pushed” towards the center of the cell, where they align, before being pulled back to the poles of the cell before the cell divides. The “push” that drives the chromosomes towards the center of the cell is called the “Polar Ejection Force” (PEF, or sometimes the spindle ejection force). Wells suggests that the centrioles are generating the PEF.

Centrioles consist of nine microtubule triplets arranged like the blades of a tiny turbine. Instead of viewing centrioles through the spectacles of molecular reductionism and neo-Darwinism, this hypothesis assumes that they are holistically designed to be turbines. Orthogonally oriented centriolar turbines could generate oscillations in spindle microtubules that resemble the motion produced by a laboratory vortexer. The result would be a microtubule-mediated ejection force tending to move chromosomes away from the spindle axis and the poles.

Yep, that’s the design hypothesis, now if you look at the image below (Panel D), you will see the structure of human centrioles, and they are basically cylinders with capped ends. Looking at them I am reminded of a line from Melanie Safka’s “Psychotherapy”. “A things a phallic symbol if it’s longer than its wide”. 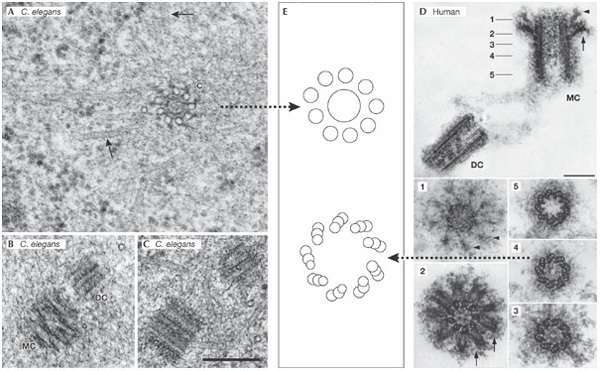 In this case, it seems a thing’s a turbine if it is longer than it’s wide. I’ve seen lots of turbines in my time, my dad used to drag me off to see dam turbines, my engineer friends have enthusiastically shown me the turbines in the Snowy River Hydro Scheme, I’ve crawled over turbo jets at the Aviation Museum and we always stop off at the wind turbines on our frequent trips from Adelaide to Melbourne. About the only common feature is that, at some level of abstraction, cylinders are involved. On the basis of the centriole structure I could with far more justification claim they were eel traps, or those things you stick in teapot spouts to stop tealeaves coming out.

Not that there is anything silly about the centriole being a rotating structure. Cylinders do rotate, and rotating cylinders are found in biological systems, so a centriolar function based on rotation is perfectly reasonable. It is the connection to human-built turbines (and hence to some “designer”) that is extraordinarily tenuous.

Wells spends some time of the details of how such a structure would function as a turbine. I don’t think he really addresses how the viscosity of fluids at such small scales would let a turbine act (at these scales water effectively acts like honey, viscosity isn’t mentioned in his formulas). Also why, if the centrioles are rotating the microtubules like a vortex mixer, don’t we see the chromosomes attached to the microtubules spin, and why since chromosomes are relatively fragile (Brouhard and Hunt, 2005), don’t they come apart. But be that as it may, despite the tenuousness of the design inference in this case, he has made a relatively detailed hypothesis about the centrioles being turbines, and even stated how it can be tested.

A. It predicts that spindle microtubules in animal cells begin to oscillate at the beginning of prometaphase, and that those oscillations rapidly accelerate until metaphase,…. B. It predicts that the centriole contains a helical pump powered by dynein molecules located in the inner wall of its lumen. … C. It predicts that the polar ejection force is regulated, at least in part, by intracellular calcium concentration.

Both A and B are technically difficult to test, but achievable. C is easy to do, but as the leading hypothesis of the “reductionist neo-Darwinians â„¢” also predicts the PEF is at least in part calcium dependent, it’s not very helpful.

So here we have a design driven hypothesis (however tenuous), with testable predictions. You would expect the year old ID “research center”, the Biologic Institute, to be on it. Or maybe this is the secret ID research that Paul Nelson is talking about. However, no follow up on this proposal has come from ID sources. Instead, the centrioles as turbines hypothesis has been firmly sunk by “reductionist neo-Darwinians â„¢”, completely unaware of Wells’s ideas, beavering away over a hot eppendorf tube.

Interlude with reductionism and Kids

First though, I’ll briefly outline the leading hypothesis of the “reductionist neo-Darwinians â„¢”. Their idea is that “motor” molecules, which bind to the chromosomes and the microtubules, push the chromosomes away from the cells poles until they meet in the midline. There is quite a bit of evidence for this. They have identified a chromosome bound protein that attaches to microtubles (Kid in mammals, Xkid in frogs and KPL-19 in C. elegans see Yajima et al., 2003, Powers et al., 2004, Zhu et al., 2005, Tokai-Nishizumi et al 2005 and references therein), that is structurally similar to other motor proteins. They can show that antibodies to these proteins prevent chromosomes lining up properly. Some elegant work with small interfering RNA’s to stop Kid production abolishes the PEF (Zhu et al., 2005), and some beautiful work has shown that Kid coated glass beads zip down microtubules, so that Kid is an active motor (Yajima et al., 2003). This has been recently confirmed in another experiment with chromosome bound microtubules (Brouhard & Hunt 2005). While not completely rock solid, there is substantial evidence that the PEF is due to chromosome bound “motors” pushing chromosomes down the microtubules.

Before I go on, I will rant about a pet peeve. Wells claims his idea is “holistic”, not reductionist. A turbine pushing chromosomes down microtubules is no less reductionist (or more holistic) than chromosome-bound motors pushing chromosomes down microtubules. The only difference is that the latter mechanism has actual evidence for it (everyone is a reductionist anyway, no matter what level of “holism” you aspire to, you are always reducing it from some more complex system so it can be understood).

Another pet peeve is Wells’s misleading citations. Wells claims that there has been little interest in centrioles, whereas it is an exploding field, as new molecular and functional tools have been developed to study them. The year Wells’s paper was published was the year of the third European Molecular Biology Organisation conference devoted solely to centrioles. The year before his paper, 15 papers solely on centriole function were published (this ignores all the other papers on centriole structure and morphology etc.). Wells states that Kid was not motile in a microtubule gliding assay, but does not report the authors caution that low force generating motors would not necessarily be seen in this assay, and a recent study has show that Kid is a low force motor (Brouhard & Hunt 2005). He reports that while Xkid deficient frog cells have PEF defects, frog oocytes have normal metaphase I. He neglects to mention that metaphase I oocyte chromosome alignment is mechanistically different from mitosis (the chromosomes are physically tethered to each other), and that metaphase II, which is mechanistically similar to mitosis, does have abnormalities. Nonetheless, these are relatively minor peeves.

So let us return to the centrioles as turbines hypothesis. While the evidence for the PEF being driven by chromosomal bound motors is substantial, it does not necessarily invalidate the centrioles as turbines hypothesis, although the almost complete wipe out of the PEF by Kid knockdown experiments is pretty compelling (Zhu et al., 2005). The fact that the majority of Kid is bound to the chromosome suggests it is not powering centriolar rotation. As I said, evidence gathered by “reductionist neo-Darwinians â„¢” has sunk the hypothesis. “Well,” the IDers will reply, “here we have a ID hypothesis generating fruitful research, even if it doesn’t support our side”. Sadly, the hypothesis was sunk as a by-product of researchers looking at completely different things, not checking if centrioles were turbines (Wells’s paper has gathered zero citations since its publication).

Firstly, look at the figure above again, this time look at the left-hand side of the image. The centrioles here are from the tiny worm C. elegans. As you can see, these are not turbine-like, they have a large, solid core, and widely separated poles, completely un-bladelike, surrounding the core. Despite not being turbines, C. elegans cells have the same PEF that mammalian cells do, and curiously enough, this PEF is controlled by a Kid-like protein, KLP-19 (Powers et al., 2004). Clearly, turbine-like centrioles are not required for a PEF.

The other line of evidence comes from tiny mutant fruit flies that lack centrioles all together (Basto et al., 2006, see figure below). Despite having no centrioles the chromosomes of these flies segregate normally, lining up nicely (even if it takes a while to get going). Thus the flies have a normal PEF in the complete absence of centrioles. This is consistent with data from fruit flies with defective centrioles (see references in Basto et al., 2006), and experiments in tissue culture where centrioles have been removed by laser, yet chromosomes align normally (Hinchcliffe et al., 2004 and references in Basto et al., 2006 see also Merdes and Cleveland 1997 for natural centrioleless cells). Thus the rationale for Wells’s hypothesis that centrioles are turbines collapses when the PEF occurs in the absence of centrioles. 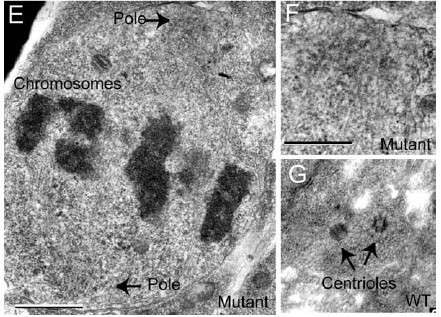 And so Wells’s hypothesis is overturned. In the end, this is not very significant, because the designer-hypothesis link was so weak. The failure of the hypothesis does not really impact ID, beyond showing yet again ID is not a fruitful source of research and that “reductionist neo-Darwinians â„¢” get to do all the heavy lifting.

This still leaves us with the question of why Wells’s paper is omitted from the list of putative ID research. Other, quite silly, papers are listed. Is Wells’s fatal flaw that he published a testable, and rejected, hypothesis?