Several people have suggested that I factor out body size to produce a chart just showing the relative increase in brain size over time. This is not as simple to do as it sounds, because most of the fossil skulls are not found with bodies, and vice versa [1]. So even if I had the paper with the body size data (De Miguel and Henneberg (1999). “Variation in hominid body size estimates: Do we know how big our ancestors were?” Perspectives in Human Biology, 4(1), pp. 65-80), one could not just do a regression. So we have to improvise.

I started with the regression lines of log (cranial capacity) and log (body mass) vs. time in Figure 1 of Henneberg and Miguel 2004. Using a highly scientific method (drawing straight horizontal and vertical lines on the chart in Powerpoint), I measured four points along each line and reconstructed the slope and intercept of each regression. One can then figure out the relationship between the two lines and how to estimate a body size figure based on brain size.

Then I just calculated a body size for each cranial capacity measurement, and re-did the chart as a chart of brain mass as a percentage of (extrapolated) body mass: [2] 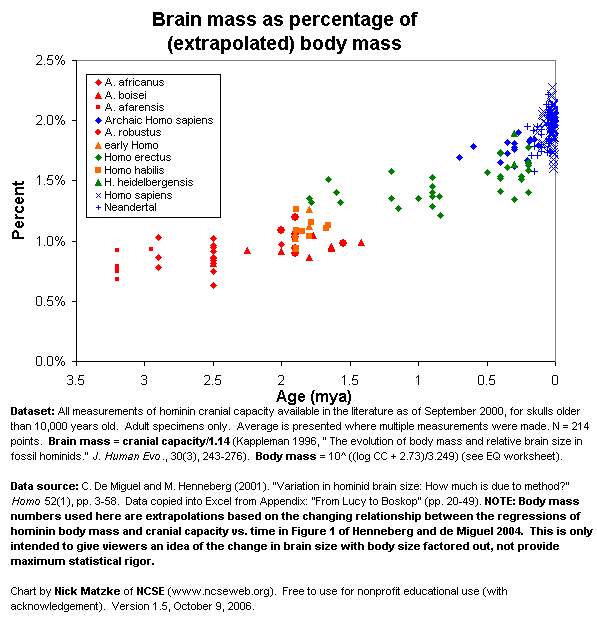 The slope is of course somewhat flatter in this chart, which shows the effect of controlling for the increase in body size. Absolute brain mass approximately tripled in human evolution, but brain mass as a percentage of body mass appears to have doubled in human evolution. This should be about what everyone expected anyway, but it is nice to see it on the chart.

Yes, I am aware there are various issues with this quick-and-dirty body size extrapolation, but this is just an attempt to give people an approximate idea of what the data look like with body size approximately factored out, which is what many requested. For real analysis, of course, go to the paleoanthropology literature. (Suggestions for improvement, data sources, etc. are of course welcome.)