The Discovery Institute has certainly been busy since I last posted on a series of Intelligent Design Creationism measures introduced into the New Mexico Legislature.

They have been busy making their usual Opening Moves: claiming The New Mexico bill is not about intelligent design, and It is censorship!

After Casey Luskin’s latest tirade against “Darwinists in New Mexico,” I was inspired to make the following Cartoon Interpretation.

The punchline appears below the fold.

That’s right - the Disco Dudes say the bills are not a big deal, and don’t even mention “Intelligent Design” or creationism - but anyone who opposes them, or even reporters who call Panda’s Thumb a “Science Blog” - is immediately labeled a Darwinist.

(An aside - If we left it up to Discovery, then surely Panda’s Thumb would be a “Darwinist” blog. But if we asked scientists, such as the ones at Scientific American, they would describe PT as a Science Blog - indeed one of the award-winning Science blogs. But Disco would just say they are Darwinists too!)

It’s the same old Creation Science Conundrum - it’s supposedly ONLY about the Science, and not about God - so why is anyone who questions any of these teachings immediately labeled an atheist?

You know, fellas, you really can’t have it both ways, all the time. Science is not a Burger King!

There have been some interesting comments re New Mexico out there in the Blogosphere. Here are a few:

A group that is Fighting for the free exchange of ideas on campus sees right through the Discovery Spin Machine, saying on January 30th that

From New Mexico comes news of proposed “academic freedom” legislation regarding the teaching of evolution. Introduced by State Senator Steve Komadina, Senate Bill 371 and the accompanying resolution, Senate Joint Memorial 9, aims to sneak Intelligent Design and other forms of Creationism into the science classroom.

Whoever comes up with the language for these pieces of legislation is getting quite crafty, as it took a few seconds longer than usual to discover the Trojan horse language. … students could “reach their own conclusions” and write “because the Bible says so” as an answer on a New Mexico biology test, and they could not be “penalized in any way.”

And a teacher’s union site devoted to discussions of “No Child Left Behind” had this to say in a Feb. 2nd blog

Legislative Language on Creationism is…Evolving. Our friends at Free Exchange on Campus have found another state legislature considering an intelligent design bill. This time, like last time, lawmakers may not know what they’re voting on.

Regarding New Mexico’s Senate Bill 371, jhm writes that the bill is written in such a way that “students could ‘reach their own conclusions’ and write ‘because the Bible says so’ as an answer on a New Mexico biology test, and they could not be ‘penalized in any way.’”

Religious values should be respected, and religion can be discussed in public schools. (How can you learn about history without considering the impact of religious beliefs and institutions?) But intelligent design, a discredited notion that lacks scientific merit, deserves no respect and has no place in our schools.

Nightlight at LitCandle had this to say about the Journal Reporter:

Casey Luskin at the DI blog recently hit the ID/Creationism debate with some blockbuster news. Sit down and hold onto your hats people.

Luskin has uncovered some troubling collusion between the Albuquerque Journal and, well, there’s just no other way to say it, the AJ is printing stories in support of…contemporary science! … I mean, next thing you know, they’ll jump into bed with those crazy heliocentrists!

And Larry Moran, Professor of Biochemistry at the University of Toronto, also saw right through the Luskin Charade, posting on Feb. 2nd

Everyone with a brain knows what this is all about. It’s not about academic freedom: it’s about intelligent design creationism.

If it were really about academic freedom then why does it specify “biological origins”? Why not every aspect of education; like capitalism, pre-marital sex, the rights of gays, global warming, and the periodic table of the elements?

Casey Luskin doesn’t get it. His knickers are all in a knot because Darwinists Begin Their Attacks on New Mexico Academic Freedom Bill. Luskin wonders why “Darwinists” are so upset because of a bill that singles out “biological origins” and not other science topics; or history subjects; or music theory; or whatever. According to Casey Luskin, this is only about academic freedom—it has nothing to do with intelligent design creationism or attacks by the religious right on evolutionary biology. It even says so right there in Section B(2).

Yeah, right. And I suppose it’s just a coincidence that Casey Luskin and the Discovery Institute are so excited about this bill. I suppose they’re really strong supporters of alternative views in the classroom. I suppose they favor teaching safe sex for teenagers, for example. After all, that’s a good way to encourage students to think critically and reach their own conclusions.

What a bunch of hypocrites. This bill promotes the exact opposite of academic freedom. By singling out one particular topic that’s up the nose of religious fundamentalists, it will have the effect of stifling academic freedom in the biology class. Teachers will feel pressured to go out of their way to pay lip service to superstition whenever they talk about evolution. Students can refuse to learn about evolution knowing that this bill will protect their ignorance.

Oh yeah - about that Censorship thing - 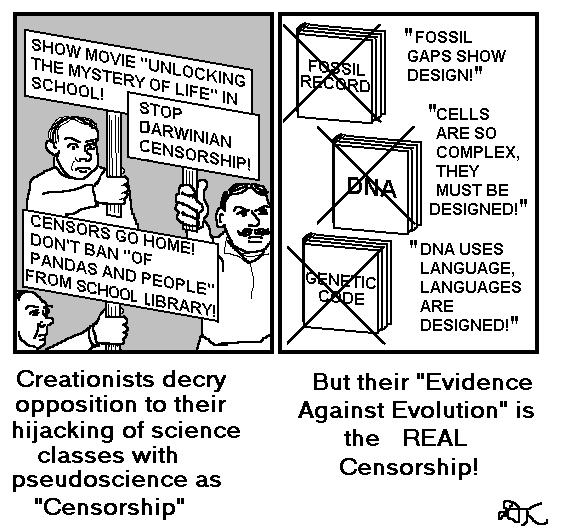