One of the most puzzling aspects of the recent Dembski - Baylor spat over the web site for Robert Marks’s “Evolutionary Informatics Lab” was the basis for Dembski’s part time appointment at Baylor as “Senior Research Scientist” (a post-doctoral position). Dembski has stated that Marks had “procured a small grant from the LifeWorks Foundation” specifically for him to work on the project. The impression given is that an indepedent agency found Dembski and his ideas scientifically worthwhile enough to put some dough into them. The strange thing was, a Google search for “Liferworks Foundation” only seemed to yield a Tennessee-based charity with a focus on the arts, and little apparent interest in science, whether of the mainstream or pseudo- varieties.

Well, earlier today JAllen, a commenter at the pro-ID blog Telic Thoughts, reported that in fact there is a second Lifeworks Foundation, this one incorporated in the state of Washington. The President and sole employee of the Foundation is a Mr. Brendan Dixon, who used to be a software programmer at Microsoft. His current occupation? He works as a “computational biology researcher” at the “ID lab”, the Biologic Institute, famous for being announced to the press several months before actually existing.

OK, so what we may have now is a Microsoft millionaire who decided to set up a foundation and use some of its money to help a buddy, among other worthwhile endeavors. Fair enough. If one explores the 990 forms Lifeworks has filed with the IRS over the years, one finds that it started very much as a conventional charitable foundation, with assets averaging around one million dollars, and giving about $60-135,000 every year, mostly spread between a number of local charities, except for the year 2005, in which they only distributed ten thousand dollars. No Lifeworks grants were ever given for scientific work.

Then, according to their 990 form for the year 2006, they decided to give away almost the entire endowment of the foundation, a total of $980,000 in one year. The main beneficiary of these donations? The Discovery Institute’s Center for (the Renewal of) Science and Culture, recipient of two donations totaling a staggering $700,000. And, of course, the Lifeworks Foundation also reported their donation for $30,000 to Baylor University for “public education”, the amount of the grant to Marks that was to pay for Dembski’s work, and was returned earlier this year from Baylor. 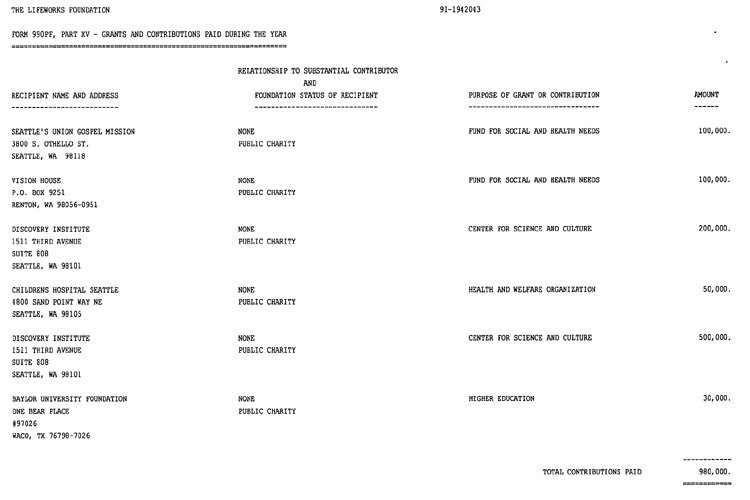 Distributions from the Lifeworks Foundation for fiscal year 2006, from their IRS 990 form.

It is impossible to know what happened that made the Dixons decide to make such a major donation to the DI, and almost completely deplete their charitable foundation’s coffers as a result. We know that at some point in late 2005 or early 2006 Dixon started working for the Biologic Institute - perhaps he found the work highly rewarding, and wanted to thank the people who made it possible. Perhaps the DI’s CSC was in need of financial support, and appealed to Dixon for help - who knows?

However, what is clear is that the “grant” awarded to Marks for his work looks suspiciously like the result of a personal agreement between long-time friends and associates, rather than of a competitive application process as are the vast majority of research grants from public or private agencies to academic scientists. Did Marks actively seek out Lifeworks as a funding source, and did he know about the connections between the Foundation and the DI? Dembski himself stated the following:

This grant and the invitation to work with Prof. Marks was entirely at his initiative.

It is quite possible, also, that Marks knew Dixon personally, having moved to Baylor from the University of Washington at Seattle, where they may have met in ID sympathizer circles. Still, the grant is a bit odd in Mark’s extensive funding history, which overwhelmingly consists of conventional grant awards, mostly from major governmental agencies (NSF, NIH, Office of Naval Research, JPL, etc), private companies (such as Boeing) and institutional sources How did it dawn on Marks to ask for money for Dembski from a private foundation that up to that point had supported only local hospitals, missions, etc in the Seattle area, we can only guess.

Over the years, I have learned that with ID things are often quite different than what they seem: “centers” and “labs” are virtual online or paper entities; “peer-reviewed” papers are published by cutting shortcuts through the very process of peer-review; lists of “skeptical scientists” are mostly made up of people who are not professional scientists at all, and when they are, they have no specific expertise in the field they are so vocally skeptical about; textbooks are carefully crafted not to teach knowledge, but to obstruct it and erase it… the list of misrepresentations is endless. Now we learn that “grants” can be more like gifts between friends than actual awards for competitive scientific ideas. It’s all good to ID advocates, as long as they can sell the illusion to their followers.