After producing division and confusion for more than two years in Rio Rancho (New Mexico) science classes, the Rio Rancho School Board formally terminated the ill-fated experiment known as “Policy 401.” First passed in August of 2005, the policy did not mention “Intelligent Design” (ID) by name, but was perceived by the community and press as favorable to ID and creationism arguments, and as encouraging discussion of these “alternatives” to evolution. 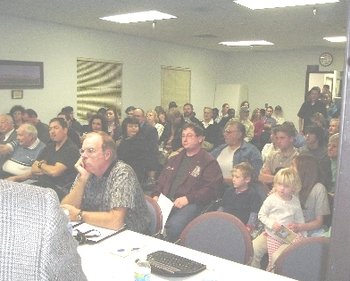 All seats were filled during the Rio Rancho school board meeting of Dec. 3rd, 2007.

The Rio Rancho Board of Education recognizes that scientific theories, such as theories regarding biological and cosmological origins, may be used to support or to challenge individual religious and philosophical beliefs. Consequently, the teaching of science in public school science classrooms may be of great interest and concern to students and their parents. … discussions about issues that are of interest to both science and individual religious and philosophical beliefs will acknowledge that reasonable people may disagree about the meaning and interpretation of data.

The policy was met with strong opposition before and after its passage, from both the science community and the science teachers affected by the decision. Policy 401 was modified in March of 2006, leaving in language that was already in statewide science standards, but removing the remark “that reasonable people may disagree about the meaning and interpretation of data.” Still, the policy was perceived by the general public and the media as allowing and promoting discussions of ID and creationism in district science classes. The main reason for this perception was the continuing claims by many ID supporters, most notably the Intelligent Design Network of New Mexico, that the policy was ID/creationism friendly. More than a year after 401 was modified, Joe Renick, the executive director of IDnet-NM, declared on Christian Radio station KNKT (107.1 FM in Albuquerque, NM, minutes 18 to 21 on the media file) that

We already have a very good policy statement that was written for the Rio Rancho district, that basically does something, and so help me, Peter, I believe that this may be the first time in the country that any school district has ever done this, this is simply to acknowledge that yes, the teaching of biological origins has religious implications… If we had a dozen school districts in New Mexico that came up with a policy on science education similar to that one that was passed by the Rio Rancho school board, that would shake the ground. … That would be the start of a revolution.”

When the host of the talk show, Peter Benson, responded by saying

“If you just have a curiosity about some of these amazing things going on, within Intelligent Design, within Creation, just looking, looking again, anew at God’s Creation… It’s pretty amazing.”

You find His fingerprints everywhere. 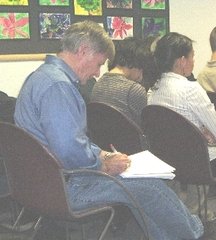 The policy was first passed in 2005, when three people on the five-member board were supporters of ID: pastors Marty Scharfglass and Don Schlichte, and Kathy Jackson, whose husband Kevin Jackson had previously had a formal family organization send copies of Michael Behe’s “Darwin’s Black Box” to state science teachers. Jackson was later elected Mayor of Rio Rancho, but was forced to resign after a series of financial scandals. In the last school board election, Kathy Jackson was replaced by science supporter Divyesh Patel, and pastors Schlichte and Scharfglass suddenly found themselves in the minority regarding Policy 401. Patel was joined by the two members who opposed the policy from its inception, board president Lisa Cour and member Margaret Terry, and the topic of this divisive policy was re-visited, culminating in a vote on December 3rd, 2007.

Of the fourteen people who made public comments before the vote, eleven supported the board’s decision to revoke the policy, while three wanted the policy to be retained. Jesse Johnson talked about the divisive nature of the Dover, PA situation, warning everyone that “One teacher promoting creationism, plus one angry parent, equals a divided community and an expensive lawsuit.” Another speaker mentioned that science changes and progresses, while religion remains static, and urged the board to consider the advice of Father George Coyne (former Vatican astronomer) to keep science and religion separate. Teacher Teresa Walker supported revocation of the policy because it redundantly re-states state science standards, and therefore implies that Rio Rancho’s science teachers are incapable of following these standards.

The head of the district’s Scimatics Academy, science teacher Dan Barbour, had some of the most penetrating commentary:

The policy has done exactly what the Wedge Strategy is designed to do: divide our community, discredit the scientific process, and promote religious explanation as a scientific explanation.

Former State Board of Education member and post author Marshall Berman, a physicist, mentioned that ID claims such as the lack of evidence of evolution in the fossil record are patently false, and that supporting such claims resulted in the Dover PA board members losing their elections, while the district ended up paying a million-dollar fine. Science teacher Jennifer Miyashiro talked about how distracting and divisive the policy had been in her own classes, and how the district was running the risk of alienating both good science teachers and high-tech businesses. Another science teacher complained that giving students spoon-fed questions straight out of ID texts was hardly “critical thinking,” and asked why, out of 800 state performance standards and benchmarks, was this single standard subjected to such meddling. Physicist and post author Kim Johnson talked about the Lemon Test, and mentioned that Policy 401 certainly engaged both the Effect and Entanglement clauses regarding unconstitutional mixing of religion with public policy, and quite likely the Intent clause as well.

Among those arguing that the board should retain the policy were a parent who said that since neither evolution nor creation could explain new species, both should be taught, and a speaker who cited Einstein’s comment that “Science without religion is lame.” The executive director of IDnet-NM, Joe Renick, read a lengthy statement defending the policy’s “honorable intentions and clear language.” Renick said the policy simply promoted neutrality through objective science education, and blamed the speakers against the policy for being the ones who got things so entangled with religion. He also called them the Darwinist SWAT team!

Post author Dave Thomas was the last commenter, and he read Renick’s statements on the Christian radio station to the board, explaining that statements such as these were the real reason the policy was perceived as supportive of religion, ID, and creationism.

The board members then discussed their own views on the policy. Members Cour, Patel and Terry gave brief and eloquent reasons for their opposition to the policy. Scharfglass said he still supported his policy because biology indeed challenges the religious beliefs of some students, that evolution should not be a topic of indoctrination, and that NM’s standards do not say “Other data should be excluded.” Schlichte went on for many minutes, backed up by a Powerpoint presentation which he said was necessary because “Not everyone in our culture understands these issues.” He went on for quite a while on the claim that all laws stem from beliefs, some religious in nature, and cited bad laws (Nazi extermination of Jews, Communist suppression, Prohibition) as well as good laws (women’s suffrage) as all being based on belief. He said that bad legislation results in the sacrifice of Truth and Freedom, and said that the First Amendment of the Constitution has been reinterpreted from its original purpose (no state-sponsored Religion) to a new, invalid purpose (separation of God from public institutions). He declared that the Supreme Court was schizophrenic for thinking this way, and yet allowing “In God We Trust” to be printed on US currency, or “One Nation Under God” to be included in the Pledge of Allegiance. Schlichte then declared that evolution is just a theory, not a fact, and that students could not learn how to get to Mars if facts (like 2+2=4) were stripped out of science texts. However, he claimed, if all references to evolution were torn out of biology texts (and he complained that they all mention evolution), students would not be impaired one whit in getting to Mars. He then compared the “Two Models,” one being “Matter=>Monkeys=>Man” and the other being in the Book of Genesis, and involving the Creator mentioned in the Declaration of Independence. He said it was better just to remove evolution from school rather than indoctrinate students into believing it as fact, and cited the preponderance of public support for creationism (over 50% in some polls) as evidence that there are valid theories besides evolution.

Board president Cour made a few additional comments, pointing out that the Rio Rancho School District already has policies regarding “Controversial Issues” (Policy 426) and “Freedom of Expression” (Policy 354), and said that students are quite free to pray on their own, and to discuss God and religion in humanities classes like sociology or philosophy, where the discussions are much more respectful and restrained than in science classes. Cour reiterated that students are encouraged to think critically about all topics, not just about evolution, and that she trusts science teachers to follow state curriculum guidelines without redundant coercion by the District. Board president Cour also stated that 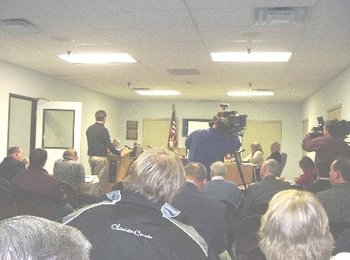 _The Media Circus at the Rio Rancho school board meeting of Dec. 3rd, 2007. KOB TV-4 got it wrong, saying > Dozens showed up from both sides to voice their opinion tonight.

KRQE TV-13 did much better:

For every one person speaking in favor of Policy 401, there were three speaking against it. Many of these were science teachers._

After some more back-and-forth between the opposing poles on the board, the vote was taken, and Policy 401 was revoked at 8:02 PM. Reason and civility are expected to be restored in science classes beginning on December 4th, 2007.

When the school board meeting was over, we learned that the Rio Rancho Public Schools lawyer had come to the conclusion that any suit brought against the 401 policy would have been dismissed, because of its benign wording adopted a year ago. While it might be true that a suit brought to dismiss the policy may have been dismissed if this were the only issue, in fact the policy would have almost certainly been named as implemental in any suit brought against the school system for teaching ID creationism. It appears that the real nature of the battle escaped the legal eyes of the lawyer. After the religious intent of 401 was fully established by the two pastors by their own words, and as perceived by the public and press, and after the effect was reported by science teachers, and after the observed entanglement with ID creationism was established, it is not at all clear that the school district would have escaped the cost for and loss of a court suit.

The district should be thankful for all those people who fought for over two years to rescind this policy. The rescission of the policy may very well have kept Rio Rancho Public Schools from being the next “Dover.” It is fairly clear that the two pastors will never either intellectually or viscerally understand this, just as they do not understand science and especially the science of evolution. It is clear that the pastors and like-minded people will probably never understand that the intent of the First Amendment has always been to keep the federal government and any state governments (via the 14th Amendment) from establishing religion in school.