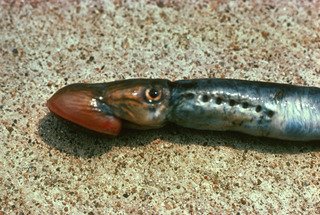 Now, it would have been easy for Doolittle to rest there, with favourable evidence for his prediction. But no, he and his colleagues put it to a more stringent test, searching for clotting factor genes in the trace archive of the lamprey genome (a representative jawless fish). This is a massive bit of work, the trace archive is all the gene fragments generated before assembly of the genome, so they had to laboriously assemble and test each putative gene. What did they find?

That jawless fish lack factors IX and V. Now, this is a pretty important chunk of the clotting system to be without. When it was revealed that whales and bony fish lacked the intrinsic clotting system, Behe effectively replied “So much the worse for them”. But in humans, lack of factor IX produces a bleeding disorder called haemophilia B, lack of factor V also produces haemophilia, and lack of both should result in a very severe bleeding disorder. 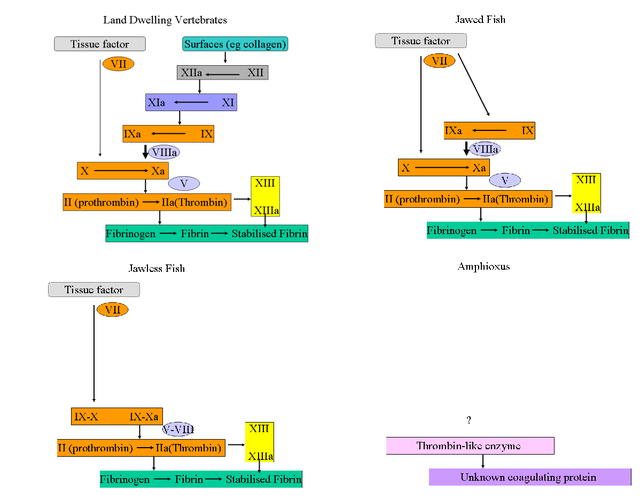 The reducible clotting system: Bony fish and jawless fish have a reduced complement of clotting factors compared to mammals. Jawless fish lack factors IX and V. Tissue factor and factor VII directly activate thrombin, but the explosive coagulation cascade is initiated by factors IX and V acting together. The older name for Factor V was proaccelerin, the activated from of factor V was known as accelerin, indicating its role in the explosive acceleration of clotting.

To put it in Behe’s imagery, the clotting system of the Lamprey is a mousetrap without a spring.

Yet jawless fish are doing quite well without factor IX and V. The implications of this for “irreducible complexity” are profound. An ID advocate might concede that “yes, the clotting system isn’t really irreducibly complex, what about other systems?”. But this example not only falsifies the claim that the clotting system is “irreducibly complex”, but the logic of entire argument Behe uses. Behe has claimed that it is not possible to directly evolve a system such as the clotting system directly, because a smaller system will not work. Yet the jawless fish system shows just that, a system that lacks key component(s) of the mammalian system is completely viable and functioning. Behe’s central argument is broken, knocking out parts of a system and showing that the system breaks does not mean it cannot evolve directly from a simpler system. The work on lampreys provides strong evidence for Doolittle’s model of generating complex systems by rounds of duplication and divergence.

Note that in all this it has been the evolutionary biologists doing the heavy lifting. Generating predictions and models, testing clotting systems in various animals, cloning clotting factors, searching databases and finally, assembling genes from fragments. What have the ID apologists been doing in the 12 years since “Darwins Black Box” was published? Not a lot. Given the central role of the clotting system to their claims, one would have expected the ID folks would have been hard at work showing that the clotting system was irreducible.

Now, to be fair a lot of this is specialized work, that needs a serious biochemistry lab. But when the Fugu genome came out in 2003, nothing was stopping anyone from searching the Fugu genome for clotting factors. The databases were public, and you could do it at home in your spare time. No need to worry about discrimination from co-workers.

Did any ID person do that? No, it was the evolutionary biologists who came up with a testable hypothesis, and combed the Fugu database to test it.

So I have a modest proposal. I would like to invite Dr. Behe, or any other ID advocate, to predict which coagulation factors are present in Amphioxus, search the Amphioxus genome database and report on whether the genes found match their predictions. The database is free, you can do it at home, and the only cost is your time.

Time for ID advocates to do some science. How about it?