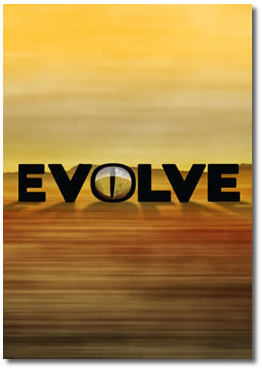 Over the next few weeks, the History Channel is showing a fascinating series called “Evolve.” Here is the synopsis of the first episode, titled “Eyes”:

They are one of evolution’s most useful and prevalent inventions. Ninety five percent of living species are equipped with eyes and they exist in many different forms. Learn how the ancestors of jellyfish may have been the first to evolve light-sensitive cells. Discover how dinosaur’s evolved eyes that helped them become successful hunters. Finally, learn how primates evolved unique adaptations to their eyes that allowed them to better exploit their new habitat, and how the ability to see colors helped them find food. …

While there were a few minor bio-gaffes, for the most part the show was excellent. There was no hand-wringing over offending creationists; instead, the show stayed right on the science. It pointed out that eyes have evolved from scratch numerous times in the animal kingdom, but also that just a few ancient genes were involved in these separate processes. The explanation of why predators need eyes with overlapping coverage toward the front - to better locate hapless prey - was done well. Conversely, the eyes of rabbits, which are almost on opposite sides of the head, serve to give that creature 360-degree vision, a sure benefit for avoiding predators. And finally, humans look forward also, but probably not for predation, but rather navigating in the tree limbs. A good explanation for why primates needed color vision was given, also: the primates’ ability to see shades of red helped them find the red-orange nutritious young leaves in the tree canopy, thus avoiding wasting time on mature, green, and hard-to-digest leaves in the trees.

“Eyes” will be repeated, and other episodes are on their way, including “Guts” and “Jaws.” (check local schedules for air times):

After being depressed by the History Channel’s apparent obsession with woo-woo topics like UFOs and Bigfoot, the new ‘Evolve’ series is an encouraging sign. Kudos, History Channel!