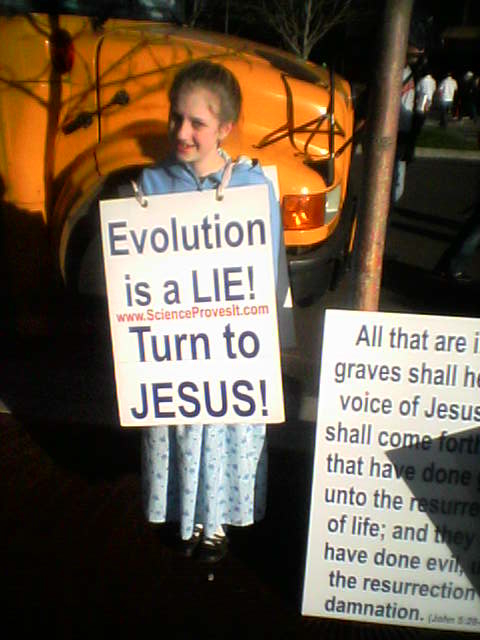 I snapped this on my cell phone camera while I was home in Oregon for Thanksgiving. This doesn’t seem to happen in Berkeley for some reason (perhaps we’re hopeless), but in several other places when I have been to large football games, several groups of protestors/preachers will be standing near the entrances with signs and megaphones yelling at people that the end is coming, repent or go to hell, homosexuality is a sin, etc.

In this case I was attending the Civil War game between the Oregon State University Beavers and the University of Oregon Ducks. The Beavers, from Corvallis, my home town, were poised to go to the Rose Bowl for the first time in 44 years if they could just beat the arch-nemesis Ducks. Many people carried roses into the game.

Anyway, on the way in, this girl and her father were holding signs (not shouting for once) and passing out literature. I asked permission from the father (and the girl) to take the photo; the father agreed as long as I took some of the literature. It’s a great photo for anyone wondering why creationism continues to persist in the culture.

I did not repent of evolution, and the Beavers and their Rose Bowl hopes were mercilessly crushed, at home, 65-38. Correlation or causation? We report, you decide.